The origin and diversification of Monk Seals.

In a paper published in the journal ZooKeys on 14 May 2014, a team of scientists led by Dirk-Martin Scheel of the Leibniz Institute for Zoo and Wildlife Research describe the results of a phylogenic study of Monk Seals, which used DNA recovered from museum specimens to elucidate relationships within the group. 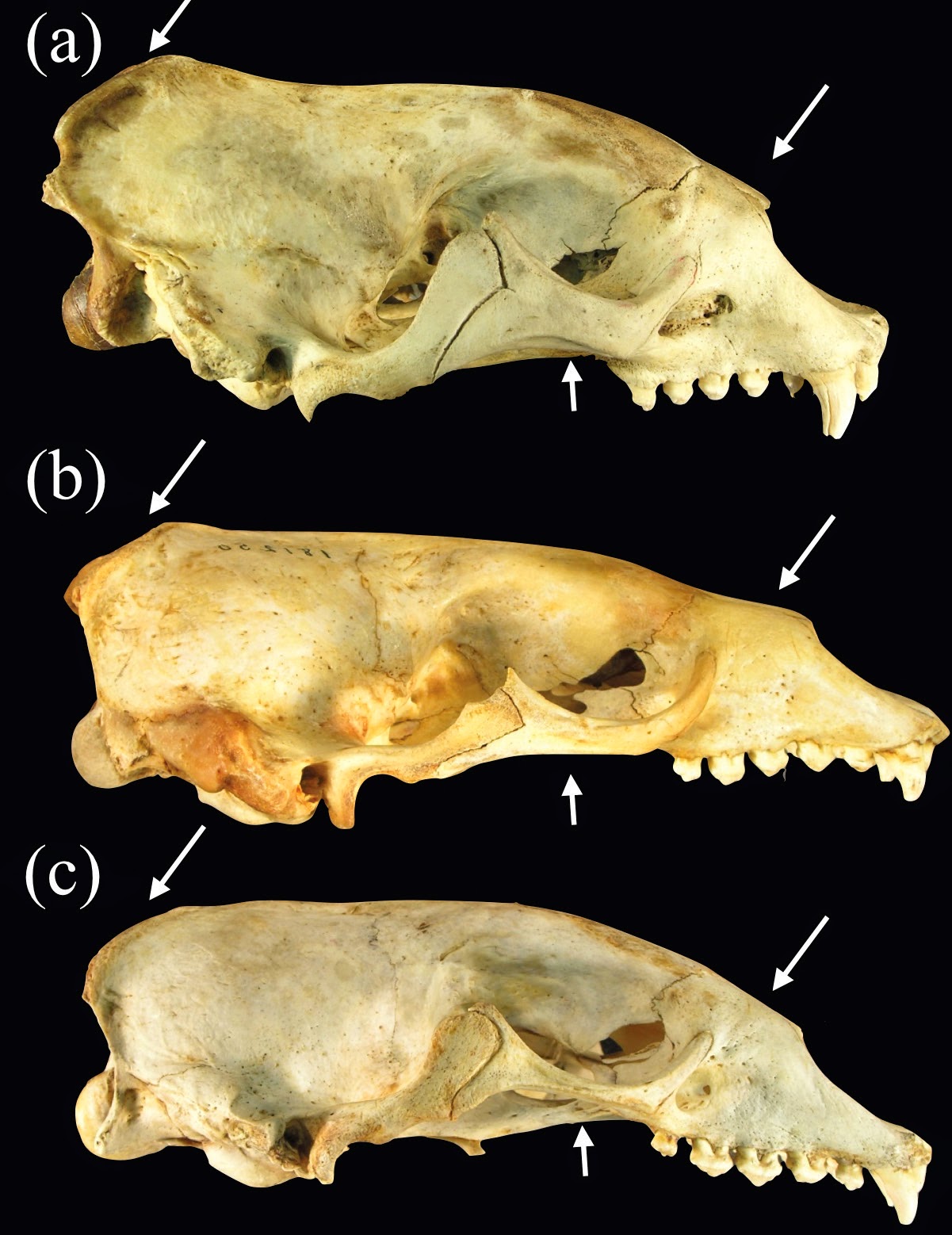 Distributions of the three monk seal species. The range for the Caribbean monk seal is taken from Adam (2004) and is based on documented populations and archaeological evidence. The range of the Mediterranean monk seal illustrates both historical (lighter shading) and current (darker shading) distributions. Scheel et al. (2014).

Using dating methods based upon genetic divergence, Scheel et al. suggest that Mediterranean Monk Seals diverged from New World Monk Seals about 6.30 million years ago, in the Late Miocene, and that the two New World species diverged about 3.67 million years ago, in the Pliocene. This later divergence fits with the timing of the closure of the Panama Seaway around the beginning of the Pliocene, which cut off the Atlantic and Pacific Oceans (they were later reconnected in the south by the separation of Antarctica and South America at the end of the Pliocene). 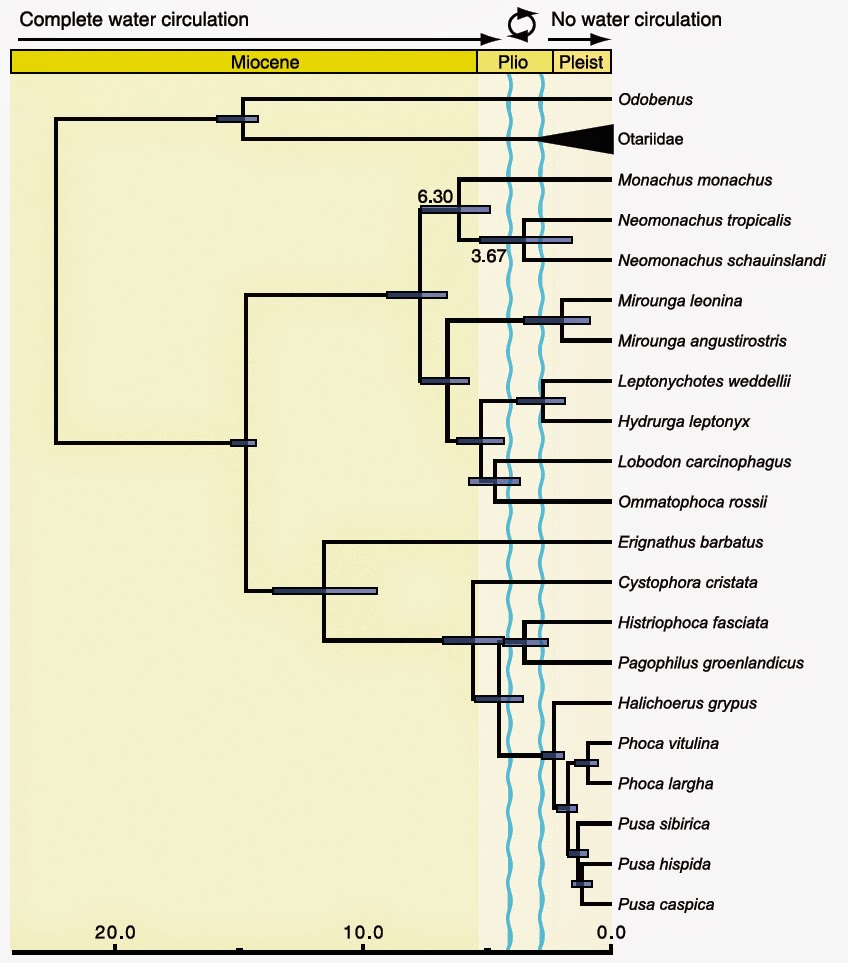 Time-calibrated phylogeny of the seals estimated from combined nuclear and mitochondrial data. Time scale is in millions of years before present. Note that the chronogram has been pruned to show only True Seals and immediate Pinniped outgroups. Node bars show the 95% HPD intervals for divergence time estimates and mean ages are labeled for the two divergence times within the monk seals. Labeling at the top indicates water circulation through the Central American Seaway, the circle and associated wavy blue lines indicate a period during which water circulation periodically ceased and resumed but a shallow seaway remained open. Scheel et al. (2014).

Most of the Seals most closely related to Monk Seals are restricted to the Southern Ocean, making it hard to determine through genetic analysis where the group originated. However there are numerous fossils of Seals deemed to be closely related to the group around the shores of the Atlantic, suggesting this is a more likely point of origin then the Pacific. Scheel et al. suggest that either the last common ancestor lived in the Atlantic and that the ancestral groups became divided when one group crossed to the other side of this ocean, though they do not have the means to determine whether this was an east-west or west-east migration. 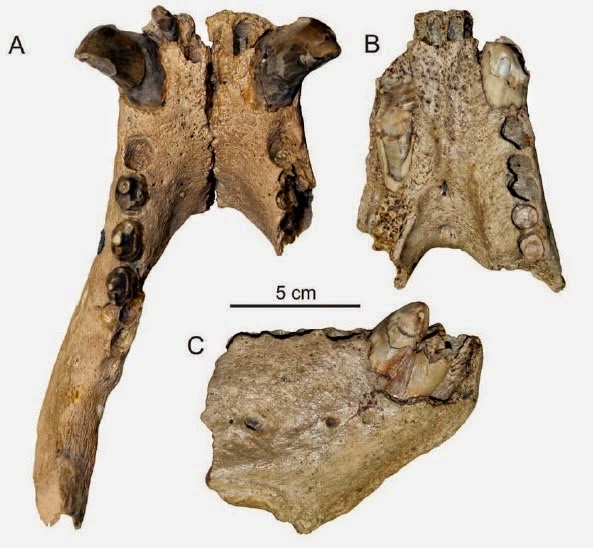 An enigmatic Walrus from the Miocene of California.

Walruses (Odobenidae) are large Seals (Pinnipedia) related to Sea Lions and Fur Seals (Otariidae). The group first appears in the fossil record about 16 million years ago towards the end of the Early Miocene. The modern Walrus (Odobenus rosmarus) is one of the... 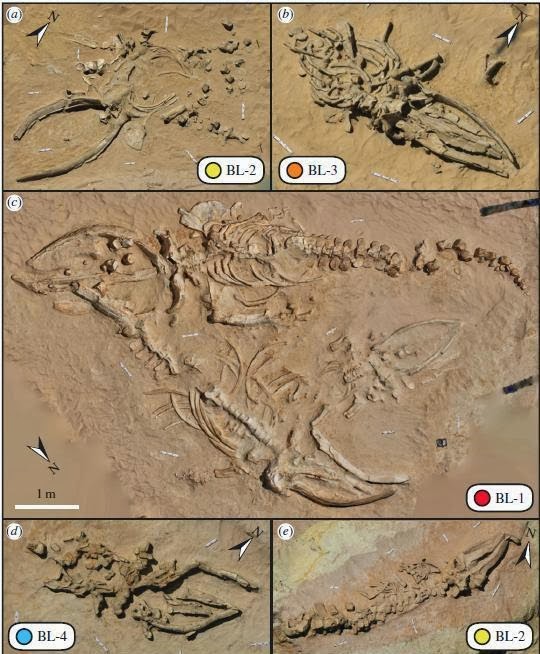 A mass stranding of Rorqual Whales (Balaenopteridae) from the Miocene of the Atacama Desert, Chile.

Mass strandings of Whales and other large marine vertebrates are often attributed to Human activity (probably with some degree of justice), but are known to have occurred in the fossil record millions of years before Humans existed, so this cannot be the only cause of such events. It is...

Porpoises (Phocoenidae) are small Whales, related to Dolphins (Delphinidae). They tend to have shorter snouts than Dolphins, with flattened, spade-shaped teeth, as opposed to the conical, pointed teeth of Dolphins. They are among the smallest and shortest lived Whales, ranging from 1.2 to 2.3 m in length and typically reaching sexual maturity at about eight years, with some species doing this as young as six...