Marine litter on the European seafloor.

Manmade rubbish (litter) is known to be extremely harmful to aquatic lifeforms, both as a direct physical hazard (such as nets which continue to trap and kill Fish long after they have become detached from fishing vessels or plastic items which resemble food and are consumed by Seabirds), or by breaking down into harmful chemical products. Marine litter is known to be a problem in all seas and oceans, with even the most remote beaches having litter accumulations, and litter on ocean currents and gyres being widely reported. The sea floors, however, are far harder to monitor, with most available data being based upon litter recovered by trawlers, plus a smaller, but growing amount of information from deep-sea submersibles.

In a paper published in the journal PLoS One on 30 April 2014, a team of scientists led by Christopher Pham of the Institute of Marine Research and Department of Oceanography and Fisheries at the University of the Azores and the Laboratory of Robotics and Systems in Engineering and Science, present a study which combines the results of surveys at 32 sites in the northeastern Atlantic Ocean, Arctic Ocean and Mediterranean Sea undertaken by a variety of institutions between 1999 and 2011. 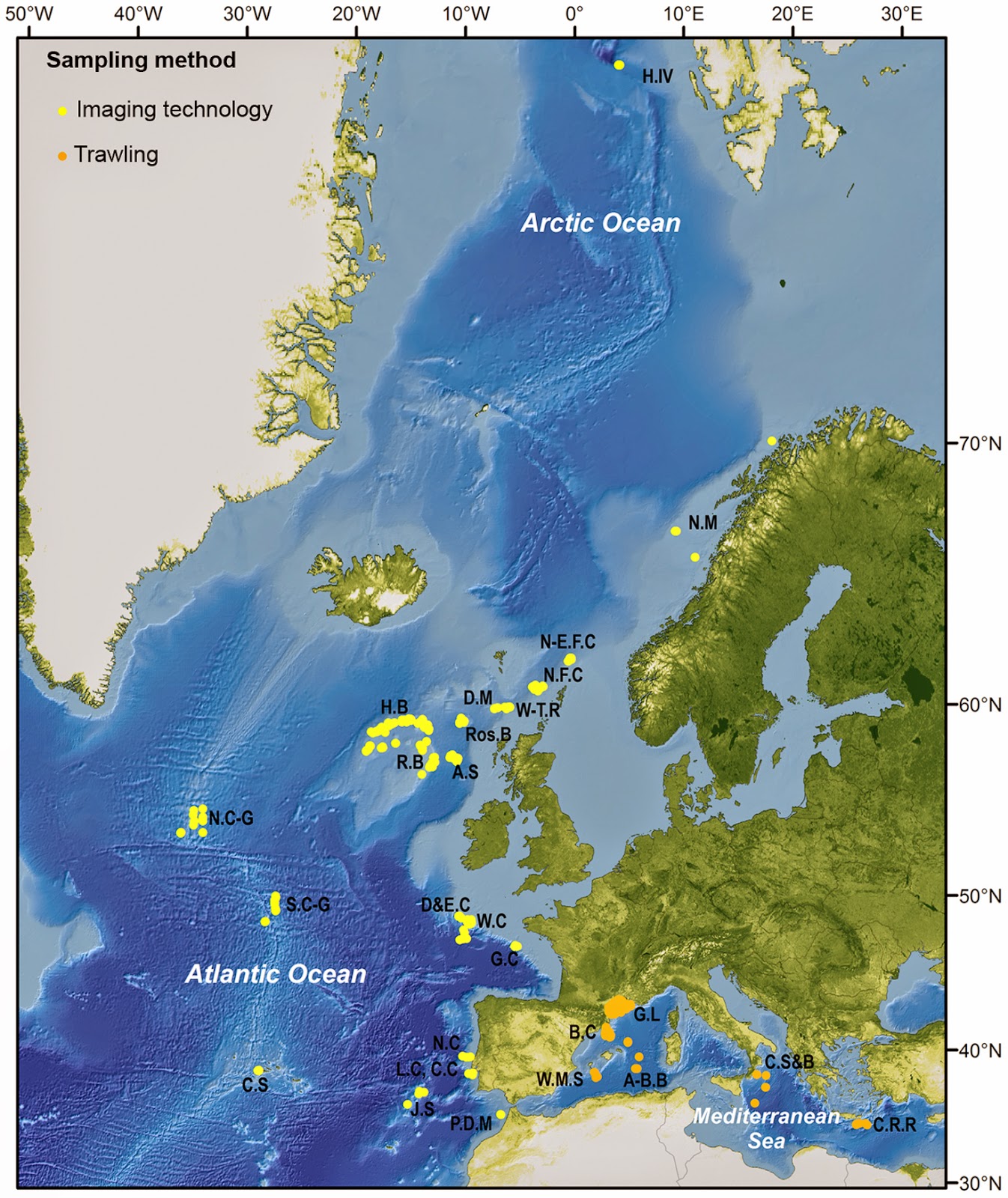 Pham et al. found evidence of litter at all sites surveyed, from depths of 35 m down to 4500 m. The commonest items were plastic bags, glass bottles and derelict fishing gear. The areas with the highest densities of litter (over 20 items per hectare) were the Lisbon Canyon, the Blanes Canyon, the Guilvinec Canyon, and the Setúbal Canyon. 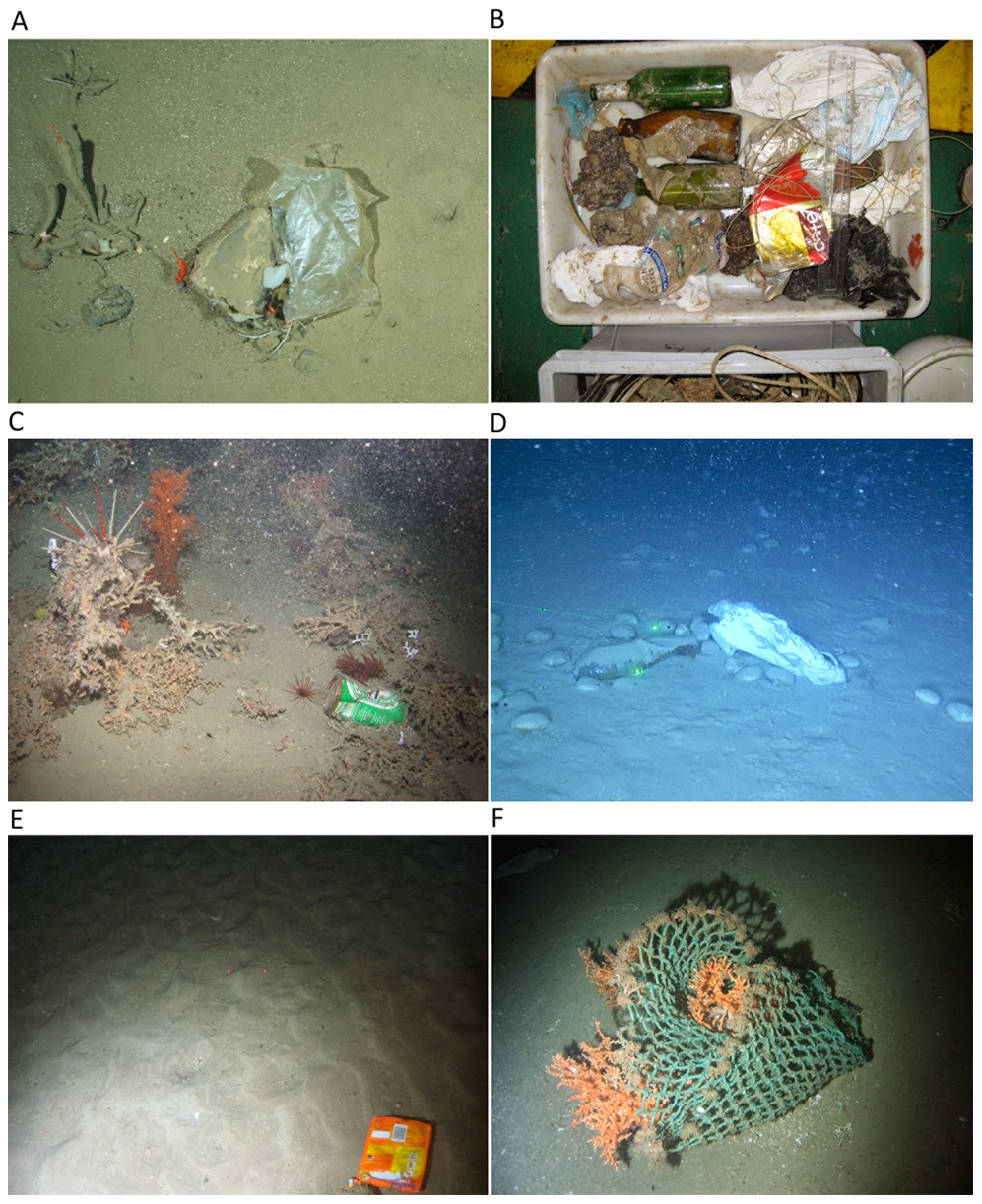 
Different forms of litter have different physical properties, which affect their distribution. Plastics can float long distances before sinking, enabling them to reach areas remote from human activity, while metal, glass and clinker sink rapidly, and are generally found close to where they first entered the seas. Clinker is mostly a result of the use of coal as a fuel for steam ships from the late eighteenth to the mid twentieth centuries, and its distribution on the seafloor reflects this. Materials such as wood, paper and fabric have short lifetimes in seawater, being biodegraded by a variety of organisms.

Plastics were found to be the most abundant litter in submarine canyons, continental shelves and continental slopes. It is thought that much of this plastic may originate as litter on land, and reach the sea via rivers or the action of the wind, and a combination of buoyancy and transport via submarine canyons (where currents have previously been shown to be efficient at redistributing terrestrial plant debris to the deep seas) appear to be good at transporting such plastics to seafloor areas remote from human activity. Just as surface dwellers such as Seabirds are known to commonly ingest plastics, with harmful or even fatal effect, some deep sea dwellers sediment feeders, such as Holothurians (Sea Cucumbers) have been demonstrated to preferentially consume plastics where they are available. While such animals only consume small fragments that can pass through their bodies (unlike Seabirds which are often killed by large pieces of plastic becoming entangled in their stomach and guts), there is a danger of persistent organic pollutants building up in the tissues of marine detritus feeders, with potential harmful effects to both the organisms themselves and to anything which consumes them.

Derelict Fishing Gear was found to be the most abundant form of litter on seamounts, banks, mounds and ocean ridges, areas which are known to be targeted preferentially by commercial trawlers, as well as inshore locations close to areas popular with recreational and/or commercial fishermen. Such discarded fishing equipment has previously been shown to be extremely harmful to marine environments by a number of studies, not just as an additional source of plastics, but due to 'ghost fishing', where nets designed to entrap Fish and other marine creatures continue to do so long after they are abandoned or lost by their original owners. 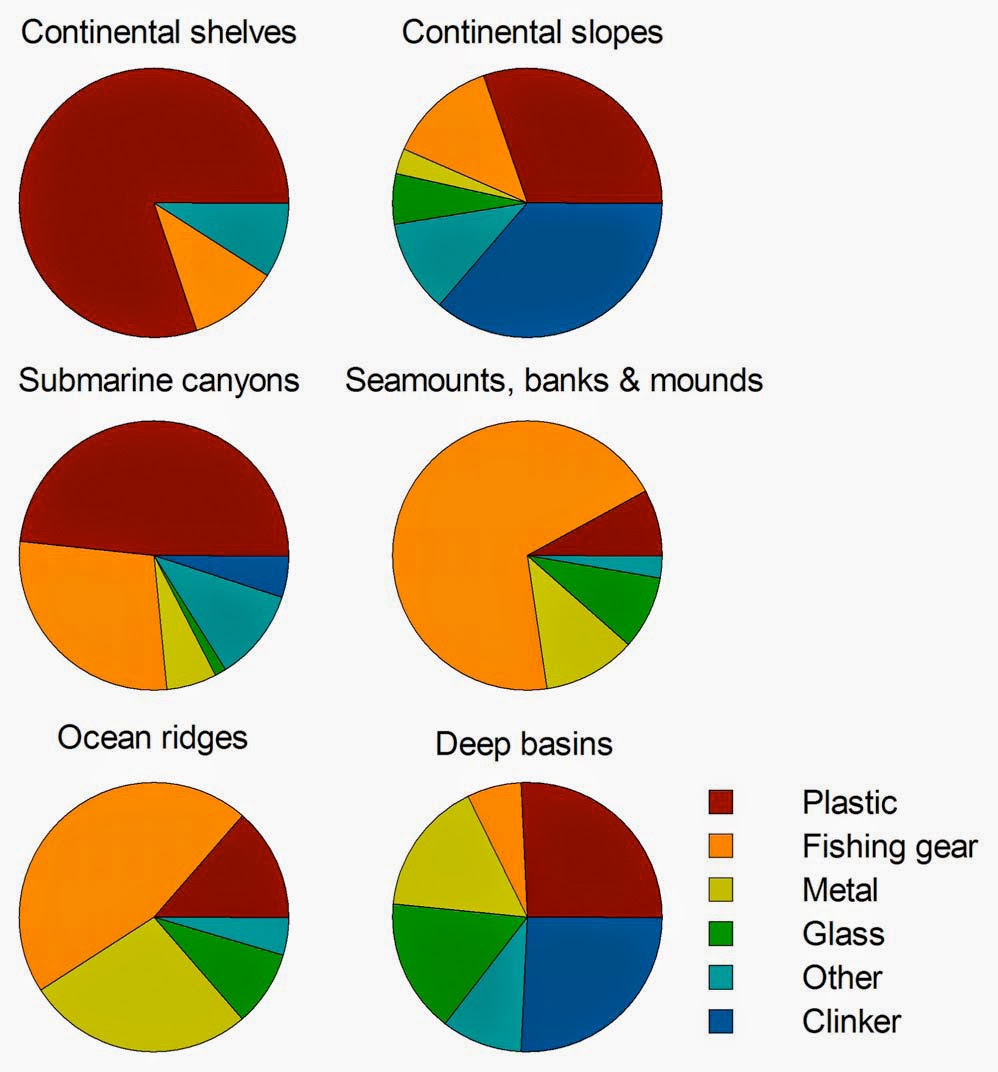 The ten most polluted places on Earth.

Each year since 2006 two environmental groups, the US based Blacksmith Institute and Green Cross Switzerland have produced an annual report into some... 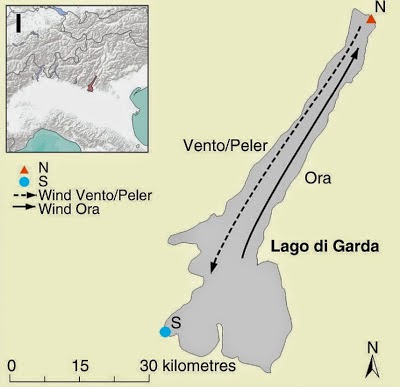 Plastic contaminants are known to present a threat in many ecosystems, with particular concern being raised about the oceans, where large accumulations of plastic are known to be found on ocean gyres (large rotating currents) and where damage to wildlife from plastic ingestion is well documented. The effect of plastic... 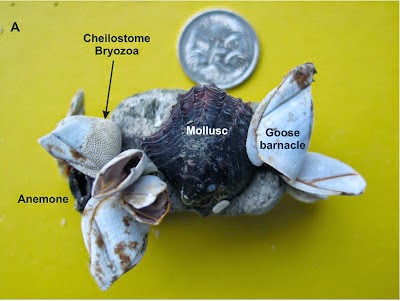 The biology of pumice rafts.

Pumice is a volcanic rock, produced by the rapid cooling of gas rich lava from submarine eruptions, or high-pressure eruptions on land. The rapid cooling traps bubbles of gas within the rock, creating a very...