Two new species of Orchid Bee from Columbia and Brazil.

The Orchid Bees (Euglossini) of Central and South America have an unusual relationship with the Orchids they pollenate, in that the Orchids do not produce a food substance with which to attract the Bees, but rather a variety of aromatic chemicals used by the males Bees to attract a mate. Each male must visit a number of flowers in order to collect enough compound to attract a female, and in doing so spreads pollen from flower to flower. The discovery of this trait in the 1960s led to the realization that male Bees could be attracted by using appropriate aromatic chemicals, and, since male Euglossid Bees are brightly coloured and easily distinguished, the subsequent identification and description of a large number of Bee species from male specimens only.

The first new species described is named Euglossa embera, in reference to the Emberá, an indigenous people occupying the Pacific lowlands of Columbia. The species is described from four male and one female specimens, collected in February 1977 by the Rio Anchicaya in Valle del Cauca Department on the Pacific Coast of Columbia, and stored in the entomological collections of the University of Kansas Natural History Museum and the Universidade Federal de Minas Gerais. These specimens were labelled as belonging to Euglossa bursigera, a Central American species from which it is morphologically distinct. The only known female of Euglossa embera is 9.56 mm in length, the males range from 11.33 mm to 12.02 mm. Both sexes are a metallic blue-green with a golden-bronzy iridescence. 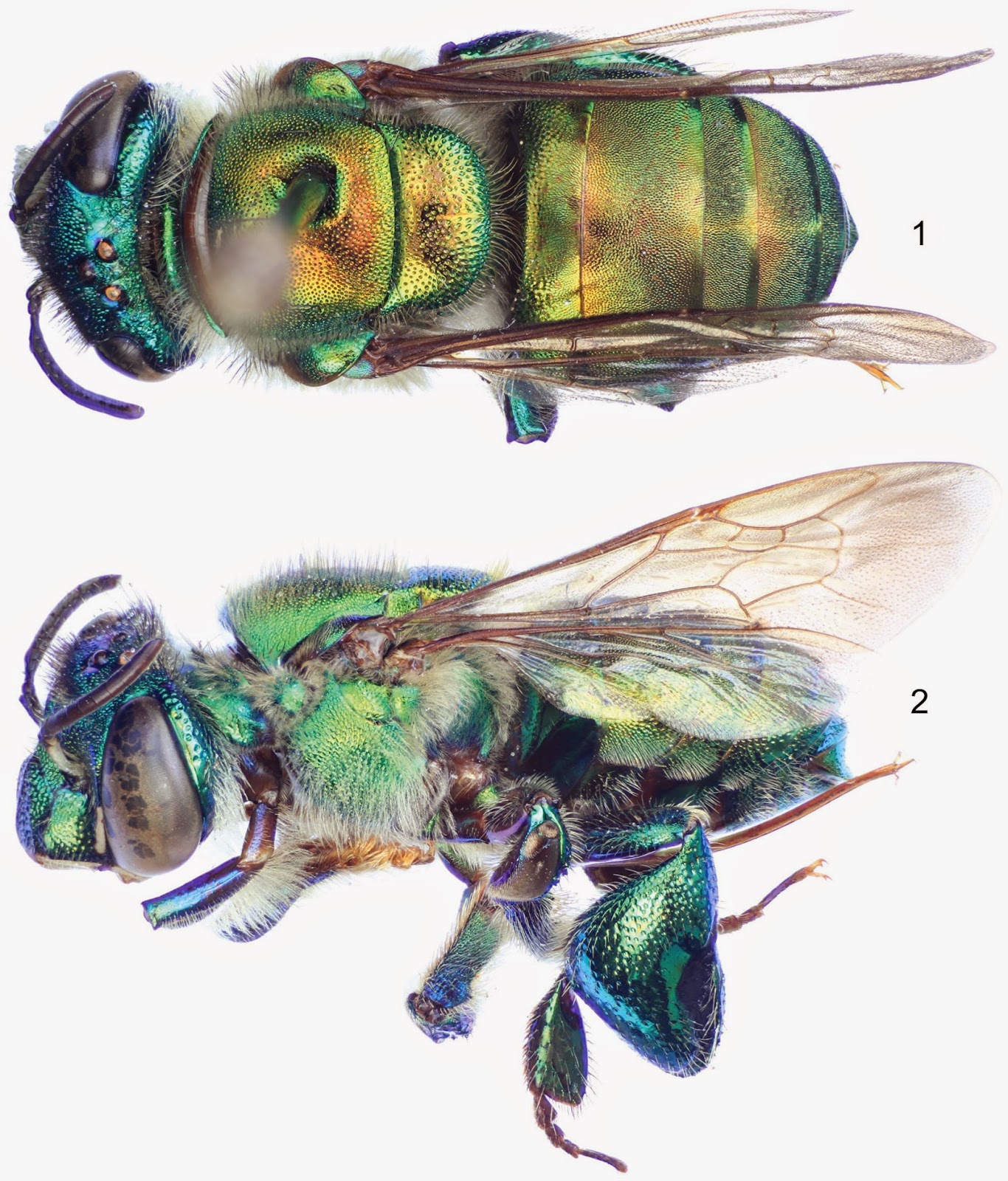 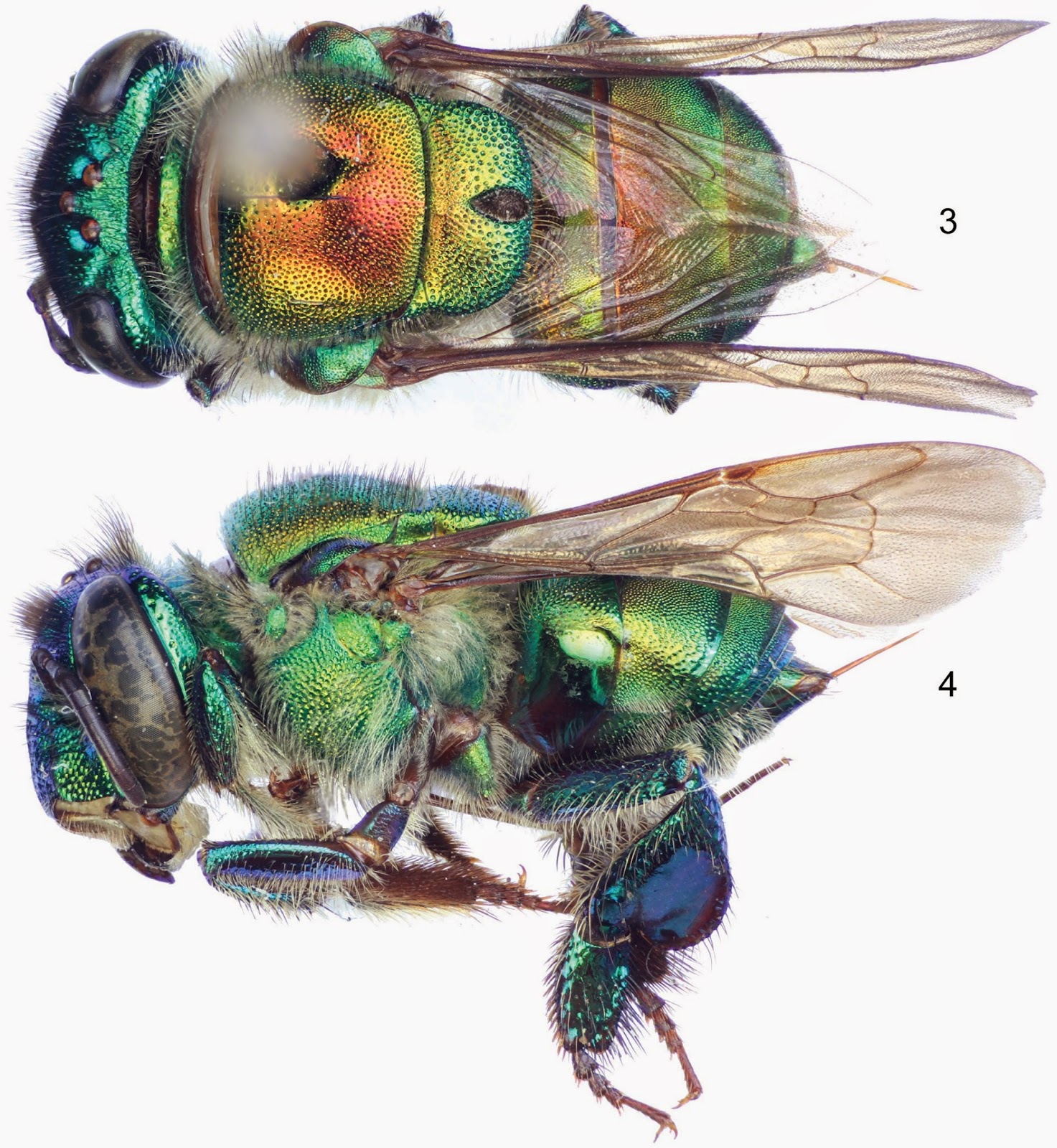 The second new species is named Euglossa adiastola, meaning ‘confused’ or ‘not separated’ due to confusion between this species and Euglossa augaspis, an Amazonian species from which it can be differentiated on the basis of its mouthparts; its mid-mandibular tooth being well differentiated from its outer tooth. The species is described from 16 specimens, all male, collected by André Nemésio from the coastal Northern Atlantic forests of Brazil. Euglossa adiastola is a 12.81 mm bottle green Euglossid Bee with a golden-bronzy hue. 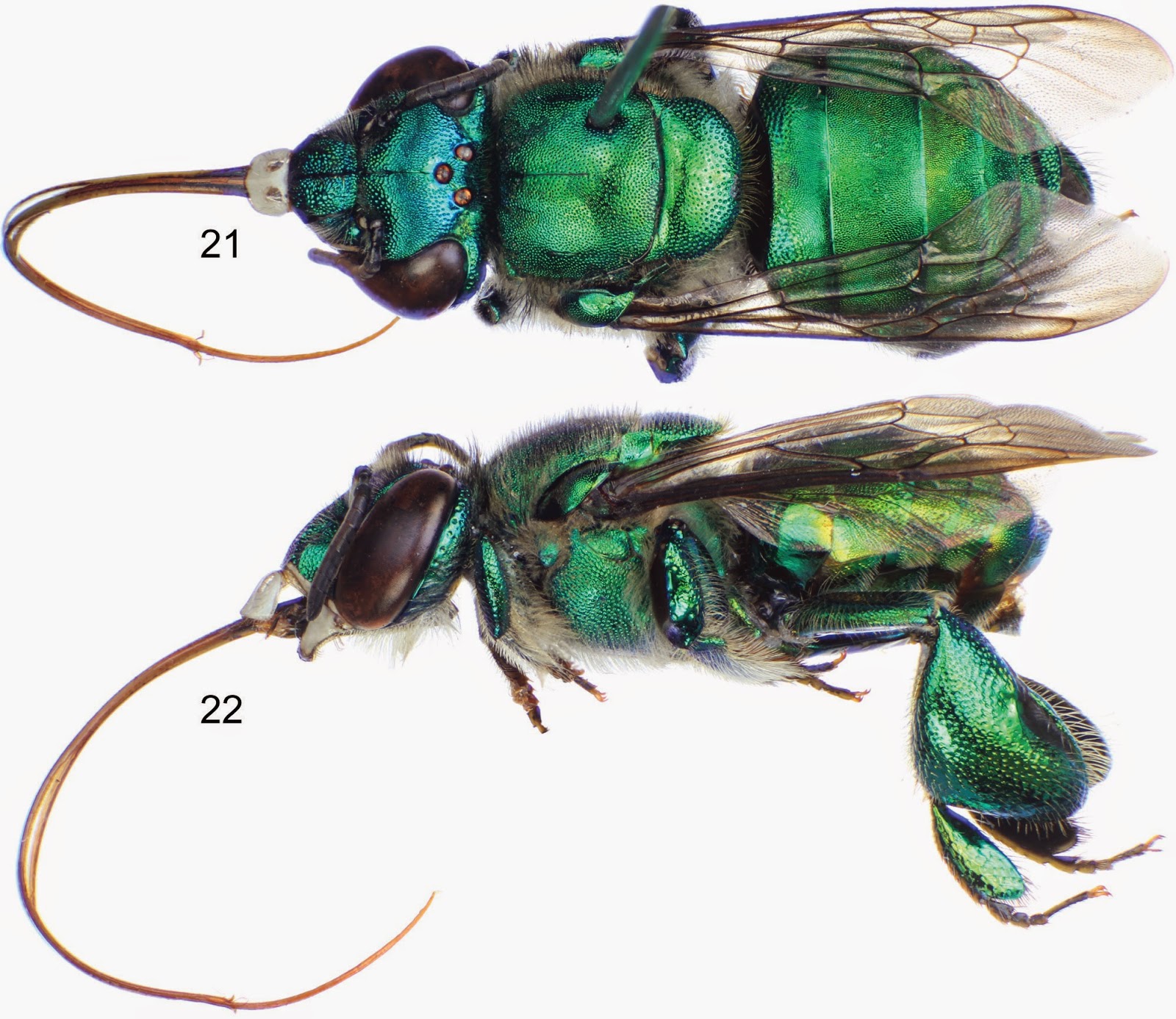 A new species of Leafcutter Bee from Mexico.

Leafcutter Bees (Megachilidae) get their name from their habit of cutting segments from leaves with which to line their nests. They are... 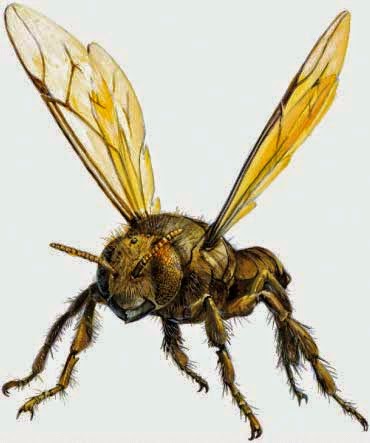 The diversification of Bees.

Bees (Anthophila) are generally accepted to have arisen during the Mesozoic, but estimates of exactly when vary considerably. The group are not well known in the fossil record (at least in part because many early palaeontologists tended to ignore Insect fossils in Mesozoic beds, happily destroying them in the quest for Dinosaurs and other large, glamorous Vertebrates), with the earliest putative Bee...

A Stingless Bee from Colombian copal.

The film Jurassic Park is based upon the idea that it might be possible to recover the DNA of Dinosaurs from inside Mosquitoes preserved in amber (fossilized tree resin). However attempts to recover biological material from amber have generally ended in failure, leaving most palaeobiologists to conclude that this is in fact impossible, and that organisms are effectively preserved in amber only as images.