Egg masses of the Diamond-shaped Squid in the Canary Islands.

The Diamond-shaped Squid, Thysanoteuthis rhombus, is a large (up to 100-130 cm, excluding tentacles) ocean-going Squid found in tropical and subtropical waters around the world. It lives mostly bellow 400 m during the day, but migrates to shallow waters by night to feed and reproduce. It is known to produce large egg masses, up to 180 cm long and 30 cm wide, containing as many as 75 000 eggs arranged in a spiral shape around a blunt-ended cylinder. However the breeding habits of this Squid are not well understood, as these egg masses have only occasionally been recorded, around Japan, Sulawesi, the Canary Islands, the Caribbean and in the eastern Mediterranean. Given the worldwide distribution of the adults, it is likely that the species breeds more widely, but this has not been recorded. Cases of the egg masses being mistaken for large gelatinous animals are known, which may help to explain this.

In a paper published in the journal ZooKeys on 21 September 2012, Alejandro Escánez Pérez of the Departamento de Biología Animal (Ciencias Marinas) at the Universidad de La Laguna, Rodrigo Riera Elena of the Centro de Investigaciones medioambientales del Atlántico and Ángel Francisco González González and Ángel Guerra Sierra of the Instituto de Investigaciones Marinas, describe the results of a systematic search for data the egg masses of Thysanoteuthis rhombus around the Canary Islands.

Pérez et al. collected data on egg mass sightings from diving clubs and sightings by Whale researchers between 2006 and 2010, and collated this with previously reported sightings of egg masses from the Canaries (four sightings all in October 2000). All sightings were supported by photographic data. 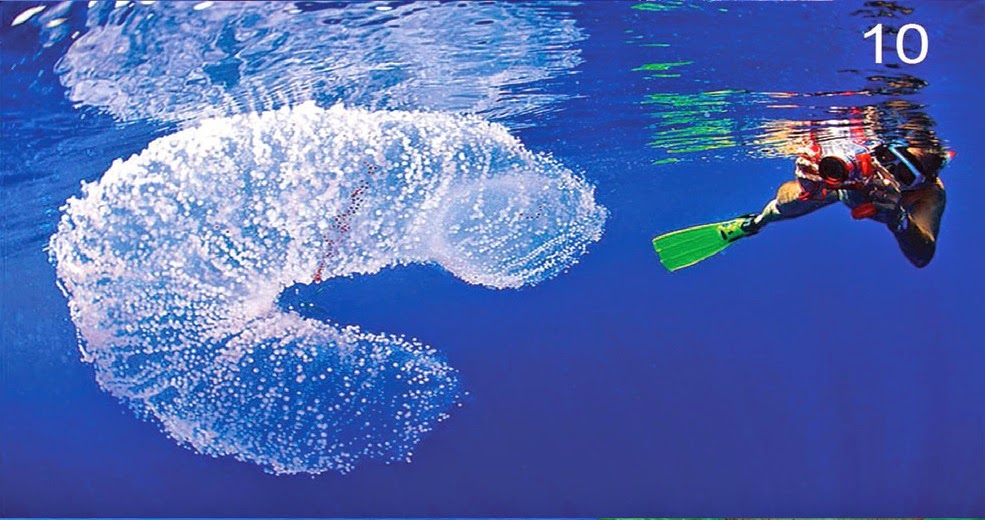 An egg mass of the Squid Thysanoteuthis rhombus from off the west coast of Tenerife in July 2010. The pink eggs contain late stage embryonic Squid, the white eggs are recently hatched. Pérez et al. (2012).

Pérez et al. were able to find records of 16 sightings of egg masses, including the original four recorded sightings from 2000. Sightings occurred between May and October, and eggs at different stages of development were observed, suggesting that the Squid were breeding locally, rather than the egg masses being carried to the Canaries by ocean currents from some remote breeding ground.

The breeding habits of Thysanoteuthis rhombus are best studied in the Sea of Japan, where a commercial fishery which started in the 1960s now produced around 6000 tons of Squid per year. These are caught using a system of free-floating 500 m droplines with lights for bait. A trial with the same method in the waters around Jamaica in 2007, following sightings of egg masses there, resulted in the successful capture of Squid. Thysanoteuthis rhombus has only ever been caught as by catch by fishermen targeting other Squid species in the Canaries, but if the area is host to a breeding population, or visited by Squid with the purpose of breeding, then the potential to develop a commercial fishery there also exists. However Pérez et al. caution that before any such fishery is developed a proper survey of its impact on other marine wildlife would have to be carried out, particularly the areas Marine Mammals, which are both legally protected and an important source of tourist revenue.

A new species of Giant Clam.

Giant Clams of the genus Tridacna are large Bivalve Molluscs in the Cockle Family (Cardiidae). They are extremely distinctive, both for their large size and their bright colouration, which is caused by symbiotic algae that live within the flesh of their mantles. Giant...

A new species of Slipper Limpet from Chile.

Slipper Limpets, Calyptriaeidae, are new world Gastropods more closely related to Conches and Cowries than to true Limpets; they are so named because their shells tend to be broad, flat and relatively...

The large Clam Laternula elliptica is found in coastal waters across the Southern Ocean, around the tip of Patagonia and all around the coast of Antarctica. It is considered a keystone species in Antarctic ecosystems, forming an appreciable percentage of the total biomass...