Series of Earthquakes off the Lleyn Peninsula, northwest Wales.

A series of three minor Earthquakes happened roughly 2 km off the northeast coast of the Lleyn Peninsula in northwest Wales on the evening of Wednesday 26 June 2013, according to the British Geological Survey. The quakes took place over a period of about two and a half minutes at about 11.30 British Summertime (10.30 GMT) . The quakes ranged in Magnitude from 1.2 to 2.8, and occurred at depths of between 2 and 8 km. There are no reports of any damage or casualties. but the quakes were apparently felt across much of the peninsula as well as on Anglesey and as far away as Barmouth and Rhyl. 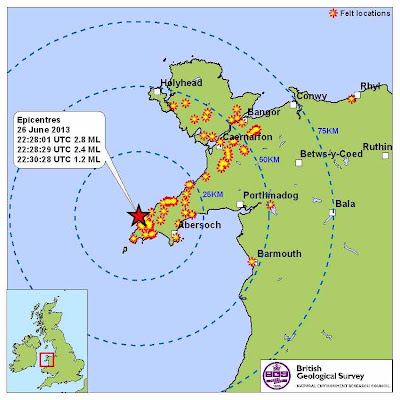 Map showing the locations of the 26 April Earthquakes, and areas where people have reported feeling them. British Geological Survey.

As a rule of thumb Earthquakes become more common as you travel north and west in Great Britain, with the west coast of Scotland being the most quake-prone part of the island and the northwest of Wales being more prone  to quakes than the rest of Wales or most of England.