Nigeria is the world's fifth largest oil producer, earning over 98% of its export earnings from the sale of hydrocarbons. However the presence of oil has widely been seen as a curse as much as a blessing, with the oil producing areas of the Niger Delta having suffered numerous pollution events in the industry's fifty-year history, and little of the wealth generated filtering down to ordinary Nigerians, 70% of whom still live on less than US$1 a day. The population of the oil producing southeast has long harbored a suspicion that they are being cheated of their share of the oil income by foreign companies and national politicians, particularly those from other parts of the country, while people in other parts of the country have accused the southeast of wanting too much of a national asset. In the late 1960s the southeast tried to succeed in a three year civil war, and violent incidents occur in the area till this day.


On 26 June 2013 two exploration companies mounting a joint drilling operation, Lekoil and Afren Plc., released a statement to the effect that they had discovered significant reserves of oil off the coast of Lagos State, in the southwest of the nation. The find came at a depth of 3600 m in Late Cretaceous to Early Palaeocene sandstones, in an exploration block named OPL 310, to which the companies have obtained rights. The explorers found 66 m of oil bearing sediment beds over a 160 m section of deposits. This is only an initial report, and the lateral extent of the oil bearing deposits is not yet clear, since these findings are from a single well, though this does have the potential to be a very lucrative find. 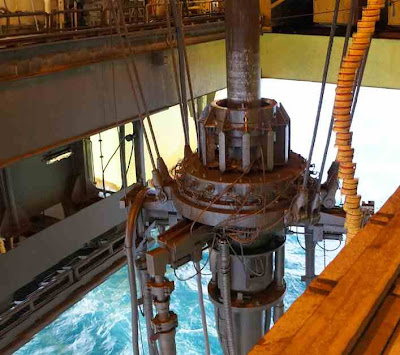 Drill head on an offshore rig off the coast of Nigeria. Afren Plc.

Natural gasses are formed from the 'cooking' of biological material (principally plant matter) in deeply buried sediments. When  biological material is sufficiently heated and pressurized, then volatile compounds are forced off as gas. In porous sediments this will typically escape from its point of origin, rising up until it becomes trapped at a high point in the porous rock, with impermeable sediments, such as clays, above.

The geology off the coast of West Africa, as determined by seismic survey, showing the location of the OPL 310 concession. Afren Plc. 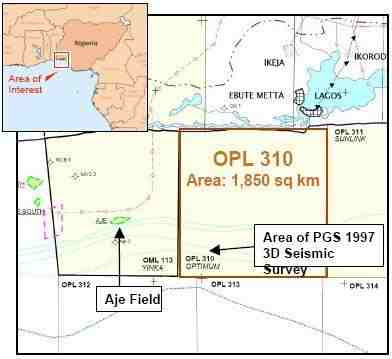 The position of the OPL 310 concession relative to Lagos. energy-pedia.