Juvenile Dinosaurs preserved in association in a lahar deposit as evidence for social behavior?

Dinosaurs underwent dramatic increases in size over a number of years during their growth, and are presumed to have played a number of different ecological roles during this growth period. Numerous examples of groups of juvenile Dinosaurs have been sited as evidence for such animals having some form of social structure when young, however it it difficult to connect post-mortem groupings of juvenile Dinosaurs with social behavior in life, as conditions which preserved Dinosaurs may also have caused their bodies to aggregate. In particular many Dinosaurs are found in fluvial deposits, where they may have been washed to the site of preservation, then buried at a site of deposition where other Dinosaurs were buried at different times.

Social behavior in Ceratopsid Dinosaurs has been proposed before, including for the species Psittacosaurus lujiatunensis, though Zhao et al. doubt the reliability of this. In particular they note a previously described specimen comprising 34 juvenile animals described as hatchlings, accompanied by a larger animal described as an adult, which has been sited as demonstrating parental care in the species, but which has now been demonstrated to be a fake, with the juveniles being yearlings rather than hatchlings and the 'adult' a six-year-old pre-adult not thought to be old enough to reproduce.

The new specimen comprises six juvenile members of the species preserved in association on a single slab. The ages of these were determined by counting growth rings in the bone, revealing five of the specimens to be five years old at the time of death and one to be six. Zhao at al. suggest that this is evidence for social behavior including juvenile Psittacosaurus lujiatunensis of different sizes but similar ages, possibly for the purpose of feeding in a herd. They site the fact that the Dinosaurs were found in a lahar deposit as evidence for them having died at the same time, rather than being deposited at a site post-mortem over a number of years. 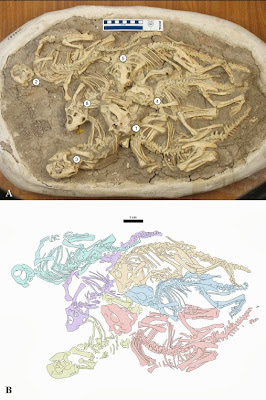 Cluster of six juvenile Psittacosaurus from the Early Cretaceous of Lujiatun, Liaoning Province, China. The specimen, illustrated as a photograph (A) and interpretive drawing (B), shows six aligned juvenile specimens, of which specimens 2-6 are estimated to have been two years old at death, and specimen 1 was three years old, based on bone histological analysis. Zhao et al. (2013).


Lahars are ash-laden flash floods associated with volcanoes. They can be caused directly by volcanic eruptions, for example when hot lava encounters a glacial lake rapidly destroying an ice dam, but are also common in areas of high seasonal rainfall, where ash deposits from a volcano can build up during the dry season, creating dams on seasonal waterways, which temporarily halt the flow of water, then give way rapidly leading to dramatic flash floods. 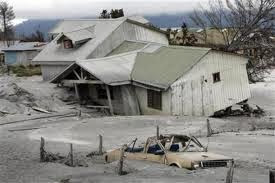 The aftermath of a lahar from Mount Merapi on central Java that hit a number of villages and towns in 2010. Montserrat Volcano.

Lahars are considered by volcanologists to be one of the most dangerous phenomena that volcanoes produce. They superficially resemble floods of water, but are made up largely of highly viscous mud, flowing rapidly because of the weight of material behind it. This means that anything caught in a lahar is in a lot of trouble, as it is not possible to swim in the thick mud, and the pressure of the flow will rapidly sweep it away.

From a geological and palaeontological perspective lahar deposits are very interesting. Volcanic ash deposits of any kind have distinctive chemical signatures, and are amenable to several geochemical dating techniques, and the tendency of lahars to bury things rapidly and combined with the fine nature of the volcanic ash particles means that fossils preserved in lahar deposits (while rare) tend to be preserved in excellent detail.

However while fossils in lahar deposits can be preserved in exquisite detail, it is highly unlikely that they will be preserved in situ. Lahars are frequently observed to sweep away cars and buildings and uproot large trees; they do not typically simply burry things where they find them. A small Dinosaur caught in the path of such an event is highly unlikely to avoid such a fate. Furthermore the positioning of the Psittacosaurus lujiatunensis specimens, with their heads and bodies aligned parallel to one-another, suggests strongly that they have been positioned by the lahar event; all flash floods, no matter what their origin, will tend to sort objects in this way. It is difficult, therefore, to see the positioning of the specimens post-mortem within the lahar deposit as evidence that they were in close proximity before being caught by the lahar, and far less so that this can be taken as evidence that they were living as a social unit before the event. 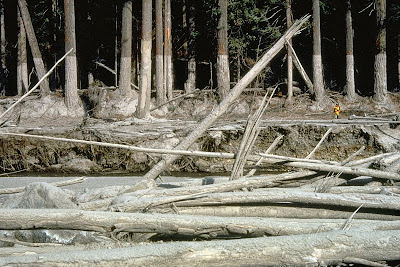