The United States Geological Survey recorded a Magnitude 5.3 Earthquake at a depth of 10 km in southern Chihuahua State, Mexico, slightly after 6.15 am local time (slightly after 12.15 pm GMT) on Saturday 21 September 2013. This was followed approximately 25 minutes later by a Magnitude 4.8 aftershock at roughly the same depth. The initial quake was felt over a wide area, and caused damage to buildings and minor landslips up to 100 km away, although this was in part due to waterlogged soils in the aftermath of Tropical Storm Manuel and Hurricane Ingrid. There are, however, no reports of any casualties. 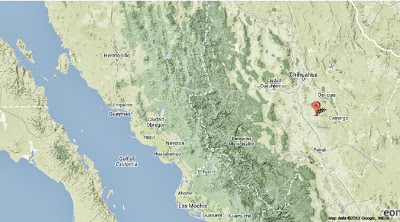 The approximate location of the 21 September 2013 Chihuahua Earthquakes. Google Maps.