The Main Asteroid Belt lies between the orbits of Mars and Jupiter; however this is not simply a vast area filled with randomly moving bodies, rather it contains a number of distinct families of asteroids which apparently have common origins, moving in similar orbits and possessing similar physical properties. There are still many bodies which do not apparently belong in any such families, known as the 'background population', although it is considered likely that these do belong to families, albeit ones so ancient that they have become dispersed, making detection of the grouping hard to detect. To make matters more complex the presence of a number of largely asteroid-free zones, from which the tidal forces produced by the movements of Jupiter and Saturn will rapidly remove any asteroids not in a set resonance with the giant planet, serving to further sort the asteroids into groups unrelated to their origins.

The inner part of the Main Belt is of particular interest, not simply because it is closest to us, but because it is considered to be the origin point of most Near Earth Asteroids, objects with orbits that bring them close that of the Earth. Asteroids which enter the Inner Solar System and cross the orbits of the rocky planets are not thought to have particularly long lives, since they are likely to either collide with a planet or be perturbed by its gravity and thrown either out of the Inner Solar System or into the Sun. It is thought that most such asteroids have been in their current orbits for less than ten million years, implying that their numbers must be replenished by fresh bodies on a regular basis.

The Inner Asteroid Belt is constrained by two such orbital resonances. Bodies orbiting at close to 2.5 AU (2.5 times the distance at which the Earth orbits the Sun) will need to be in a 3:1 relationship with Jupiter to survive, that is to say they must complete three orbits for every one of Jupiter's to avoid having their orbital path disrupted by the planet's tidal forces. This is not a fine line, as an asteroid approaches this zone they will be subjected to stronger and stronger tidal forces; since most astroids are in elliptical orbits this effectively creates an asteroid-free zone at this distance from the Sun; this is known as the 3:1 Kirkwood Gap.

At the inner edge of the Main Asteroid Belt is the v₆ Saturn Secular Resonance. Any asteroid drifting close to this zone will slowly develop a secular resonance with Saturn, that is to say its perihelion (point in its orbit where it is closest to the Sun) and aphelion (point in its orbit where it is furthest from the Sun) will become synchronized with those of Saturn, and over time become more pronounced. This leads to the orbits of such asteroids becoming more eccentric (elliptical) till they eventually encounter tidal forces created by Mars, and have their orbits disrupted, often being drawn into the Inner Solar System into orbits crossing the rocky planets.

There are several families of asteroids in the Inner Asteroid Belt, the largest of which the Nysa-Polana Complex are the largest, followed by the Erigone Family and the Sulamitis Family, although the Nysa-Polana Complex is generally thought to comprise at least two different astroid families in similar orbits. There are also a large number of background objects, comprising approximately 50% of the material in the Inner Solar System.

In a paper published on the online arXiv database at Cornell University Library on 13 May 2013, Kevin Walsh of the Southwest Research Institute in Boulder, Colorado, Marco Delbó of the Observatoire de la Côte d’Azur, William Bottke also of the Southwest Research Institute and David Vokrouhlický of the Institute of Astronomy at Charles University in Prague re-examine the Nysa-Polana Complex of asteroids, and identify two families within the group; families which also encompass a number of asteroids previously regarded as background objects.

Firstly Walsh et al. identified a subset of the Nysa-Polana Complex with notably lower albedos than the remainder (i.e. they were less reflective, and therefore darker). They then attempted to trace the origin of this group backwards in time, calculating that they had originated at about 2.494 AU, very close to the 3:1 Jupiter resonance Kirkwood Gap at ~2.5 AU. The only low albedo asteroid close to this point is (495) Eulalia, a 39 km diameter object, which has a nearly circular orbit at about 2.48 AU. 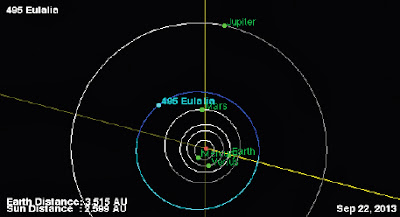 (495) Eulalia had not previously been considered to be a member of the Nysa-Polana Complex, which typically have high eccentricities, due to this low eccentricity orbit. However Walsh et al. calculate that like many bodies (495) Eulalia has an oscillating eccentricity, which becomes more and less elliptical on a 600 000 year cycle. They include it in the new group of low albedo Nysa-Polana Complex objects, which they name the Eulalia Family of asteroids, and suggest that it should be considered the parent body of the other objects in the family. Based upon this data they calculate that the Eulalia Family of asteroids formed in a collision between (495) Eulalia and another, unknown, body at a distance from the Sun of 2.488 Au, between 900 and 1500 million years ago. They calculate that around half the matter from this collision would have been ejected outwards, towards the 3:1 Kirkwood Gap, where it would have been scattered by the tidal influence of Jupiter, and estimate that at the time of the collision the Eulalia parent body would have had a diameter of 100-165 km.

Calculating the orbits of the remaining Nysa-Polana Complex bodies suggests that these do cluster around the orbit of (142) Polana, a 55 km diameter object in an eccentric orbit, the second largest object in the original Nysa-Polana group, and one of the bodies after which it was named. These bodies have an average semi-major access (mid-point in the orbit) of 2.418 AU, closer to the Sun than the Eulalia Family, and have higher albedos (low albedo objects are almost completely absent closer to the Sun than 2.3 AU). The group is thought to have formed in a collision between 2000 and 2500 million years ago. A large number of objects previously considered to be background objects can be assigned to this group. 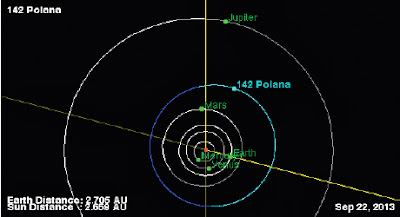 Walsh et al. conclude that the majority of Near Earth Asteroids will originate within these two asteroid families, and note that future space missions are planned to visit several of these, and that the prospect of future missions to the Inner Asteroid Belt is quite good. This presents the prospect of further refining our knowledge of these groups, and testing the theory that they share common origins.