Peacock Spiders of the genus Maratus are a group of Jumping Spiders, Salticidae, found only in Australia. They are small in size, typically less than 5 mm in length, though the males are brightly coloured and engage in elaborate courtship dances, which give the group their name. The males have flaps on the sides of their abdomens which are extended during these display dances to form a ‘fan’, which adds to their resemblance to Peacocks.

In a paper published in the journal Peckhamia on 19 March 2015, Jürgen Otto of St. Ives, New South Wales and David Hill of Simpsonville, South Carolina, describe a new species of Peacock Spider from northeast New South Wales. The species was originally recognised from museum specimens collected at Andersons Flat and the area north of Tamworth, and further investigations were able to locate living specimens at Andersons Flat.

The new species is named Maratus elephans, due to the resemblance of the markings on the fan of the males, which resembles the face of an Elephant. The two male specimens examined were 4.46 and 4.74 mm in length respectively. They were black in colour with white hairs on the limbs and coloured hairs on the head and abdomen. The heads are blue with broken orange-red bands behind the eyes. The abdomens are blue with large, hair-rimmed flaps and an orange-red pattern resembling an outline of the head of an Elephant. 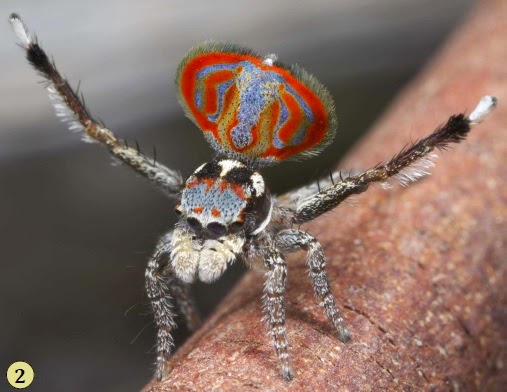 The male of Maratus elephans during a courtship dance with its fan extended and raised. Otto & Hill (2015).

The females of Maratus elephans are light brown in colour with darker hair on their heads and abdomens; they resemble closely the females of other Peacock Spides, which are very hard to tell apart in the absence of the males. The specimen examined was 4.66 mm in length. 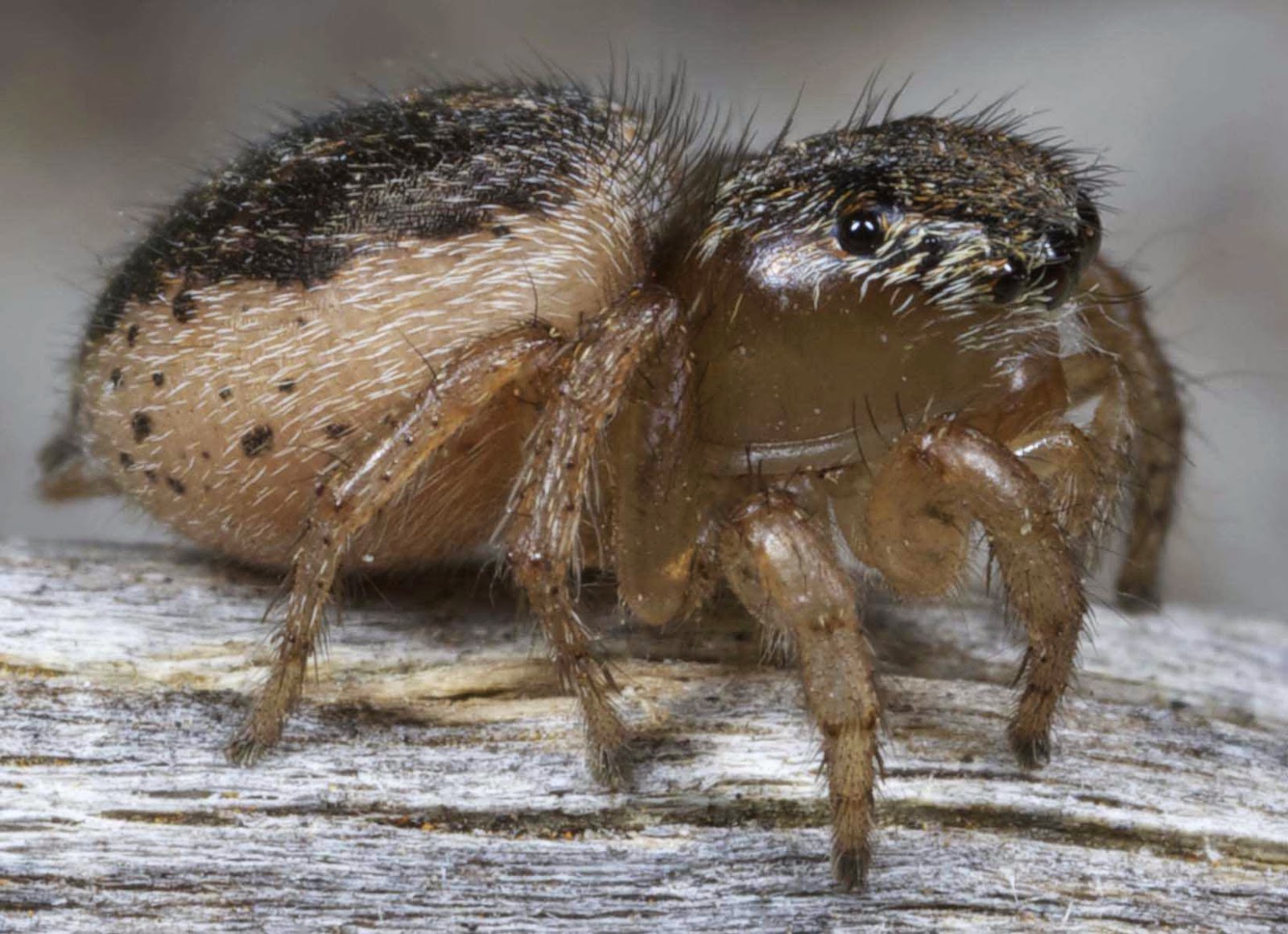 Maratus elephans closely resembles two previously described species of Peacock Spiders, Maratus pardus, from the south coast of Western Australia and Maratus volans, which is found along the east coast of Australia from Victoria in the south to Queensland in the north. All three species have iridescent purple-blue background colours on their fans, which are fringed with white hairs, and patches of white hair on the tarsuses of their third legs, which are apparently used to make their fans look larger during parts of their courtship dance. Otto and Hill believe these three species to be closely related, and refer to them as the ‘volans-group’. 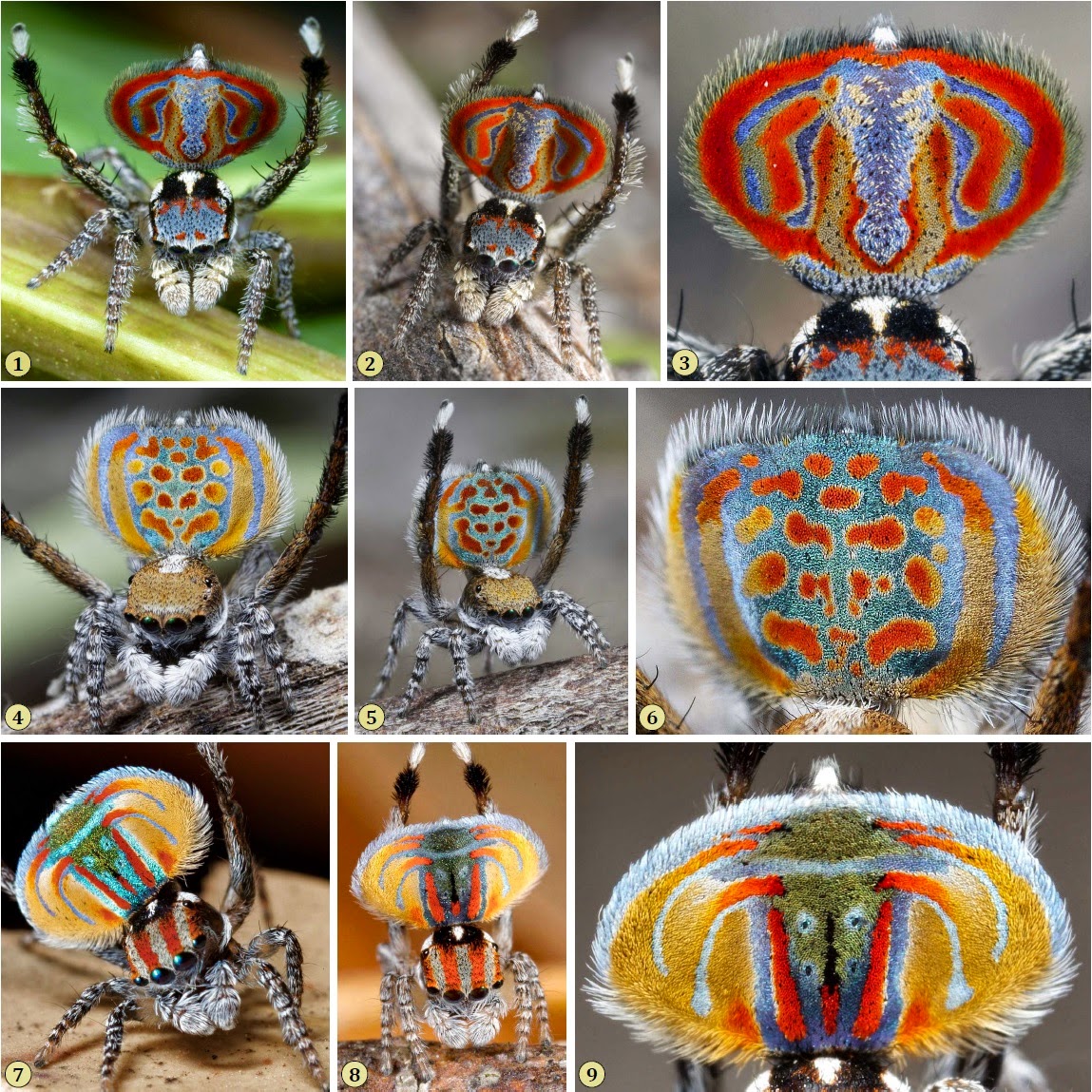 Displaying males of the three species associated with the volans group of the genus Maratus. (1-3) Maratus elephans from Andersons Flat near Chaffey Dam, New South Wales. (4-6) Three different Maratus pardus from Cape Le Grand National Park, Western Australia. (7-9) Three different Maratus volans from Ku-ring-gai Chase National Park, New South Wales. The position of legs III relative to the fan varies in the three species from (2) one leg in front and one behind in Maratus elephans, to (5) both legs in front in Maratus pardus, to (8) both legs behind in Maratus volans. All three species are vividly and distinctly coloured. Otto & Hill (2015). 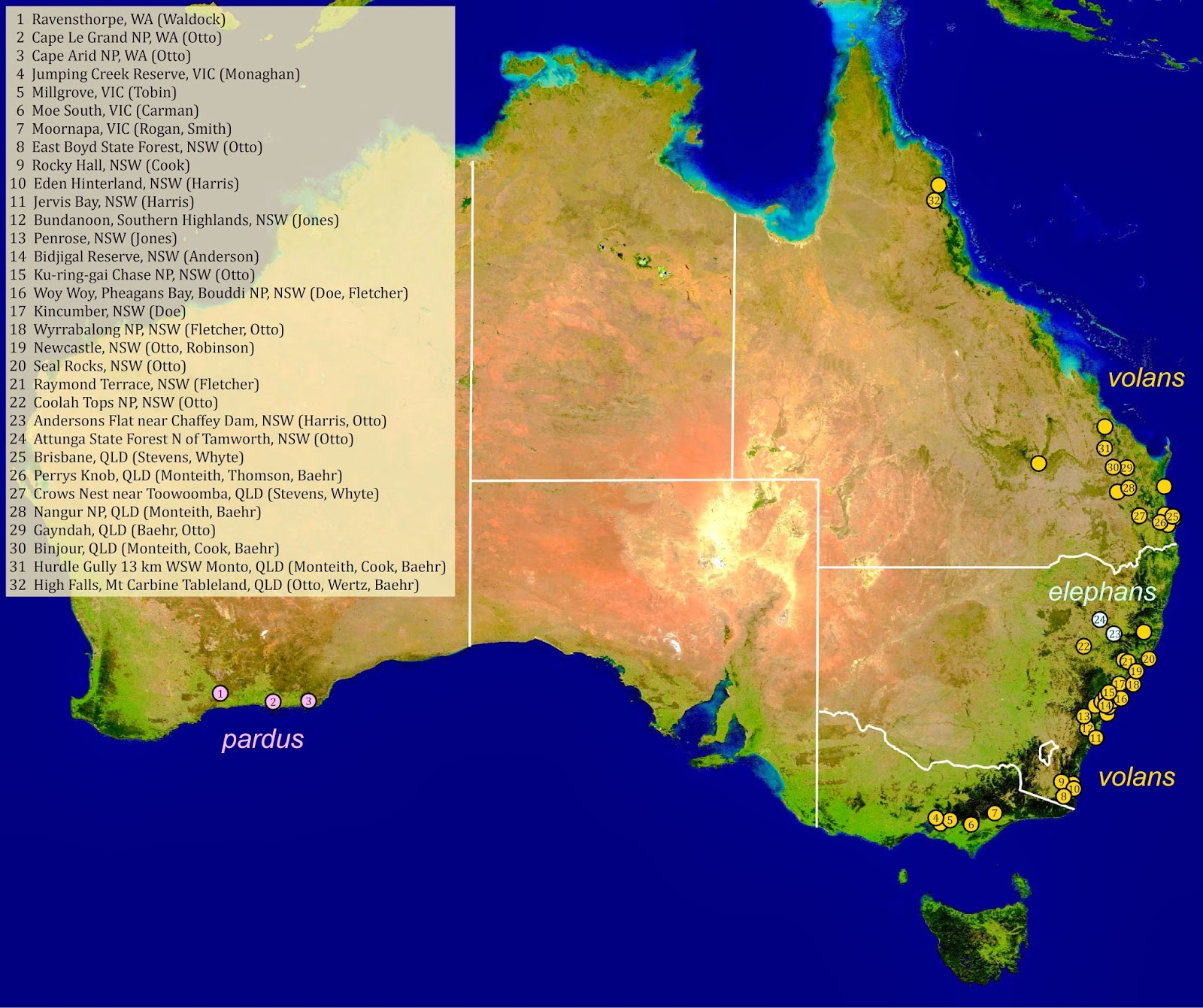 Known localities for the three members of the volans group (Maratus elephans, Maratus pardus and Maratus volans). Numbered localities are associated with records that have been verified from photographs (many posted on FLICKRTM), by the examination of specimens, or listed in previous publications. For each listed locality, the respective collector and/or photographer and/or examiner is given. Unverified records of Maratus volans from the Atlas of Living Australia are not numbered, and some of these posted records (e.g., west of Melbourne, or Tasmania) are not shown here as they are now known to represent other species. Otto & Hill (2015).

A new species of Peacock Spider from Western Australia.

Peacock Spiders, Maratus spp., are a group of small Jumping Spiders, Salticidae, found only in Australia. The group gets its name from the bright colours and elaborate courtship dances of the male Spiders... 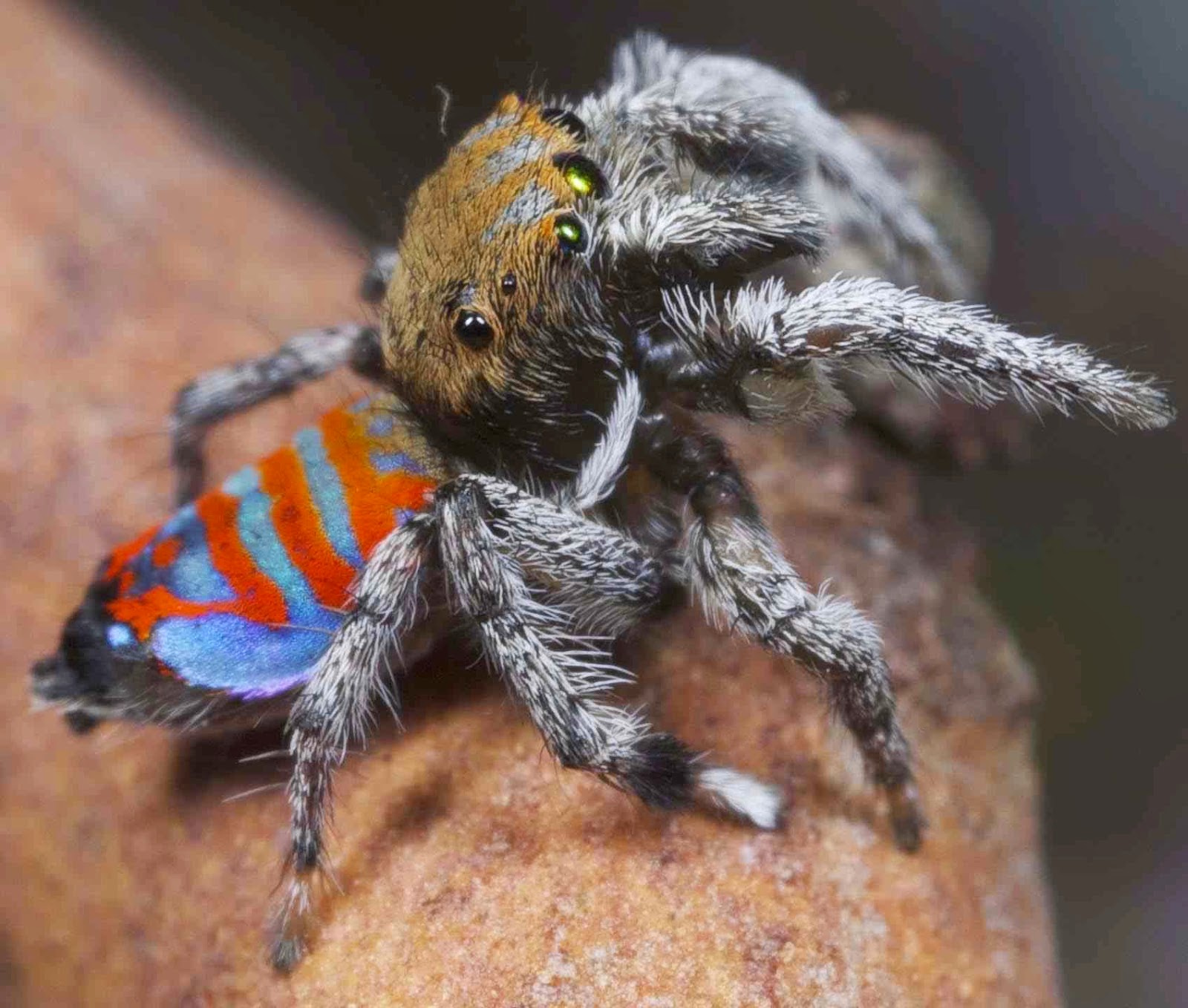 Two new species of Peacock Spider from southern Queensland.
Peacock Spiders, Maratus, are Jumping Spiders, Salticidae, endemic to Australia and distinguished by the bright colours and elaborate courtship dances of the males. The calcitrans group of Peacock Spiders currently comprises three members of the genus... 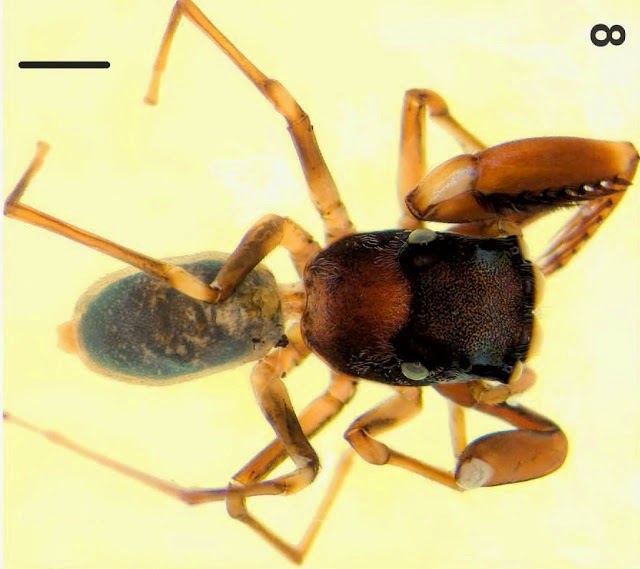 A new species of Jumping Spider from Papua, Indonesia.

Jumping Spiders (Salticidae) are specialists who actively hunt their prey, rather than trapping it in webs as most Spiders do. They have extremely well developed vision, with large, forward facing eyes, and an enhanced respiratory system, which enables them to keep their tissues well oxygenated. Jumping...