Neovenator salerii: The neuroanatomy of the rostrum of an Early Cretaceous Allosauroid Dinosaur.

Neovenator salerii is an Early Cretaceous Allosauroid Theropod Dinosaur, known from a single partial skeleton from the Wessex Formation of the Isle of Wight. The skull of this skeleton is exceptionally well preserved, being deep and laterally (sideways) flattened, with blade-like teeth. This has been interpreted as indicative of a terrestrial apex predator, with a hunting technique that is likely to have involved targeting soft tissues, then defleshing with the sharp teeth, but avoiding biting down on bone or other hard tissue, which would produce wear marks on the teeth that are not seen (this is seen in some modern predators, such as Cheetahs).

In a paper published in the journal Scientific Reports on 16 June 2017, Chris Tijani Barker and Darren Naish of the National Oceanography Centre at the University of Southampton, Elis Newham and Orestis Katsamenis of the Faculty of Engineering and the Environment, also at the University of Southampton, and Gareth Dyke of the Department of Evolutionary Zoology and Human Biology at the University of Debrecen, and the Center for Interdisciplinary Biosciences at Pavol Jozef Safarik University, describe the results of a study of the cranial morphology of Neovenator salerii using microfocus μCT to investigate the distribution of its rostral foramina (the openings of channels within the bones of the snout through which nerves and blood vessels pass)and any internal preservation.

Barker et al. found that Neovenator salerii has an extensive network of channels within its maxilla and premaxilla running laterally (to the outside of) the dental alveoli, and connected to opening on the outer side of the bone. This is interpreted as part of the neurovascular system, occupying at least 7.3% and 6.7% of the internal volume of the premaxilla and maxilla, respectively. 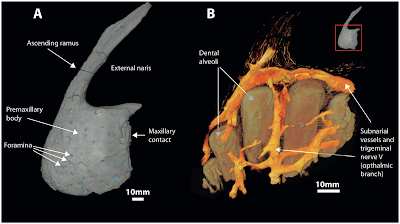 Similar structures have previously been found in Pliosaurids (Mesozoic Marine Reptiles) and the Spinosaurids Spinosaurus and Baryonyx (Theropod Dinosaurs interpreted as having been partially aquatic). For this reason, the structures have been interpreted as sensory in nature, used to detect potential prey moving in the water. However, Neovenator appears to have no adaptations to an aquatic lifestyle, suggesting that the channels must have a different purpose.

Similar channels are found in a number of living animals notably some species of Birds, particularly those that engage in probe feeding, such as Kiwis (Apterygidae), Waders (Scolopacidae), and Ibises (Threskiornithidae), as well as in Ducks and Geese (Anseriformes), which use their beaks in a variety of ways for the detection, recognition, and transport of food, and Parrots (Psittaciformes), which are capable of extremely fine manipulation of objects with their beaks, including tool use. Beaks are known in a range of non-Avian Dinosaurs, including many Ornithischians and some Theropod groups, such as Ornithomimosaurs, Therizinosaurs, Oviraptorosaurs and some Ceratosaurs, but there is no evidence of any such structure in any Allosauroid, and nothing known about the biology of Neovenator suggests that it might have had a beak. 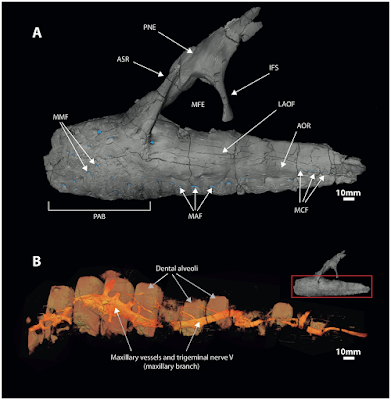 Channels of this type are also known in modern animals which lack beaks, notably Crocodylians, where it is associated with the detection potential prey moving in the water (as has been speculated for Pliosaurids and Spinosaurids), as well as temperature regulation. The very narrow snout seen in Neovanator makes a role in temperature regulation unlikely, as the snout would have shed excess heat (the only real issue for an animal this size) very efficiently without it. This makes it likely that the channels seen in the maxillary bones of Spinosaurus did indeed carry nerves rather than blood vessels. Barker et al. therefore speculate that the species, and other large Theropods such as Tyranosaurids, was probably capable of highly controlled snout movements, both when subduing prey and manipulating food, and that this would have been useful to an animal which needed to avoid brining very sharp, but not particularly strong, teeth into contact with the bone or other hard tissues of its prey. 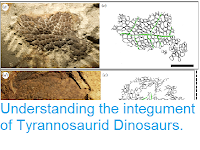 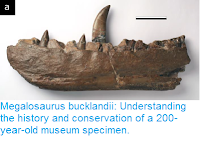 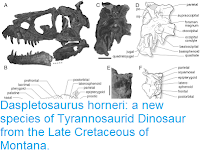 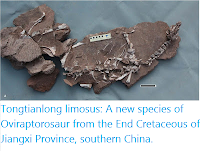 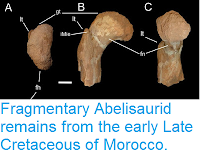