Palaeopathology in a Permian Varanopid.

Bone remodelling is an essential physiological process in growth and healing, and deviations from normal bone physiology in the form of pathologies aid in the understanding of normal bone metabolism. The study of such pathologies in the fossil record therefore offers insight into the biology of extinct groups, and the evolutionary history of groups alive today.

In a paper published in the journal PLoS One on 7 August 2019, Yara Haridy and Florian Witzmann of the Museum für Naturkunde at the Leibniz-Institut für Evolutions- und Biodiversitätsforschung, Patrick Asbach of the Institut für Radiologie at the  Charité-Universitätsmedizin Berlin, and Robert  Reisz of the Dinosaur Evolution Research Centre at Jilin University, and the Department of Biology at the University of Toronto Mississauga, discuss an example of a pathological condition in a Varanopid from the Early Permian Richards Spur deposits.

The Early Permian Richards Spur locality at the Dolese Brothers Quarry in Oklahoma preserve one of the most diverse assemblages of terrestrial vertebrates known from any Permian site. The remains are preserved in fissure deposits within the Ordovician Arbuckle Limestone, in a unique depositional environment that has been interpreted as cave systems that underwent periods of flooding not unlike present-day conditions that are commonly associated with monsoonal episodes, preserving an upland biota that is seldom recorded in the fossil record. The fissure fill sediments are early Permian (about 289 million years old) and consist of soft clays and mudstone. They contain articulated specimens or isolated bones of mostly small to medium sized terrestrial Tetrapods.

Varanopids are generally considered to be early Synapsids related to Pelycosaurs (although an alternative suggestion, that they are early Diapsids, has recently been made by Ford and Benson). Varanopids range from the latest Carboniferous to the latest Middle Permian with a broad geographic distribution in Pangea. They were small to medium-sized (1.5 - 2m total body length) predators, superficially resembling extant Varanids (Monitor Lizards) in their habits.

Haridy et al. describe two pathologically fused caudal (tail) vertebrae of an undescribed Varanopid based on outer morphology and the internal microstructure as revealed by X-ray microtomography. The collective anteroposterior length (front to back length) of the fused vertebrae is 23 mm. Taking the midpoint of the ventral fusion zone between the centra (disks) as the boundary between the two elements, the anterior vertebra has a length of 11 mm and the posterior one of 12 mm. The vertebrae can be assigned to Varanopidae based on the proportionally elongate, slender vertebral bodies with a small perforating foramen in the mid-portion of the centrum and the double keelation on the ventral surface. In addition, the neural arches are slender and slightly concave, and the neural spines are delicate, and posterodorsally slanted.

The two vertebral centra are completely fused to one another without any superficial trace of an intervertebral suture, the proximal part of a haemapophyses (part of the bony arch on the ventral side of a tail vertebra) is fused to the posteroventral margin (back) of the anterior centrum and to the anteroventral margin (front) of the posterior centrum. The proximal part of another haemapophysis is fused to the anteroventral margin of the anterior vertebra. The neural arches are completely fused to the centra such that there is no evidence of a neurocentral suture. The fusion zone between the centra protrudes outwardly and forms a large swelling of bone on the right side. In ventral view, the proximal part of the haemapophyses is visible and shows a left/right-asymmetry in the bases of their paired ventral processes; the base of the right process is larger than the left one and extends further anteriorly. In both haemapophyses, the ventral processes are broken off.

The bone surface is irregular on the left side of the centra, there are irregular grooves, depressions and crests on the right side, sometimes resembling the imprints of large vessels. The bone surface, however, is always smooth with some nutrient foramina penetrating the bone. The right intervertebral foramen for the spinal nerve root between the anterior and posterior vertebra is largely filled with bone; only two smaller openings of unequal size are present in the depression that represents the original foramen. From the larger of these openings, a shallow groove extends in a dorsal direction. In contrast, the intervertebral foramen on the right side is open but slightly constricted by bone growth on the anteroventral margin. A smaller opening is located ventrally on the lateral side of the swollen fusion zone of the centra, also showing a shallow groove running dorsally from the opening. The posterior edge of the posterior vertebra shows that at least the anterior margin of the intervertebral foramen between this and the posteriorly following vertebra was unaltered. The exposed (not fused) anterior and posterior articulation surfaces of the vertebral centra are concave and have a roughened, unfinished surface indicative of a cartilage cover in life. They are round in outline in anterior and posterior view, respectively, and have a centrally located, large notochordal canal. These joint surfaces were not pathologically altered. The opening of the neural canal is well preserved on the anterior face of the anterior vertebra. It is broad ovate in outline, measuring 2.5 mm in width and 1.5 mm in height, and is not constricted by pathological bone growth. 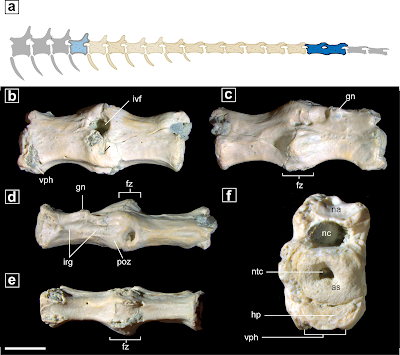 The X-ray microtomography scans of the pathological fused vertebrae show that the smooth exterior of the vertebrae did not indicate the extreme pathology that lay beneath the surface. The notochordal canal and the neural canal remain open and unobstructed in longitudinal and cross sections. However, the notochordal canal maintains a consistent diameter throughout both vertebrae, which is unlike the unaffected vertebrae in which the notochordal canal has a wider diameter towards the anterior and posterior ends. The cross-sectional outline of the neural canal is broad-ovate to reniform in the anterior and posterior regions of each vertebra. In the middle of the vertebra, it becomes nearly circular in cross section, as in the normal vertebra. In sagittal section, the neural canal expands at the boundary of the two vertebrae. The intervertebral space is almost absent and restricted to a very thin gap. 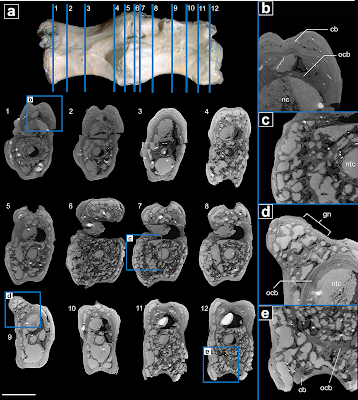 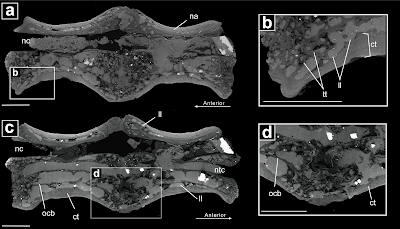 Haridy et al. consider a number of possible causes of the pathology seen, including infectious arthritis, spondylitis tuberculosa, ankylosing spondylitis, Scheuermann’s disease, spondylitis ankylosans, vertebral tumor, fracture callus causing the growth and subsequent fusion, osteochondrosis intervertebralis, and chronic osteomyelitis, but only two conditions were found to fit the observed symptoms, fibrous dysplasia and Paget’s disease. Of these, Paget’s disease seems the more likely cause as cases of fibrous dysplasia affecting more than one bone are rare.

The cause of Paget’s disease is unclear, though correlations have been suggested between cases of the disease and wood-fired heating, tobacco smoking, consumption of brains, rural life, and especially contact with farm or wildlife animals. This has led to the suggestion that the disease is linked to a zoonotic Virus (Virus typically found in animals but which can infect Humans under some circumstances), with a combination of infection by the Virus and exposure to certain environmental triggers needed to activate the condition. If this theory is correct, and if it also holds true for the infection seen in the Varanopid, then this would represent the oldest known example of a Viral infection in the fossil record. 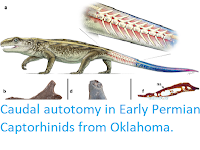 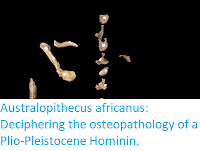 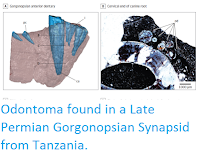 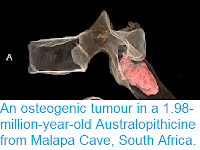 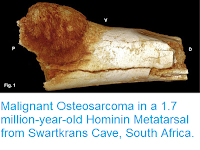 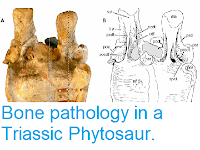