Authorities in Russia are launching a widespread investigation into industrial sites located on areas of permafrost following a 20 000 tonne diesel spill at a site in the city of Norilsk in Krasnoyarsk Krai on Friday 29 May 2020. The spill is thought to have been caused by the collapse of a fuel tank located on permafrost at a site owned by Norilsk Nickel, the world's largest producer of nickel and palladium, which was not reported to authorities for two days after it was detected, leading to a spill that covered an area of about 350 km² and spread 12 km down the Ambarnaya River.

Series of satellite images take between 23 May and 1 June 2020, showing the spread of diesel down the Ambarnaya River following a spill at an industrial plant in Norilsk, Krasnoyarsk Krai. Copernicus Sentinel/ESA.

Around 55% of Russia's territory is located on permafrost (land that remains permanently frozen), and this land includes many industrial sites, including mines and oil and gas wells. The Arctic Council has been warning for some years that such sites were at risk due to rapid warming, both globally, and locally due to heat generated at such sites, and while newer industrial sites in Russia are typically built with this in mind, it is unclear to what extent older sites have been modified to take possible thawing of permafrost. 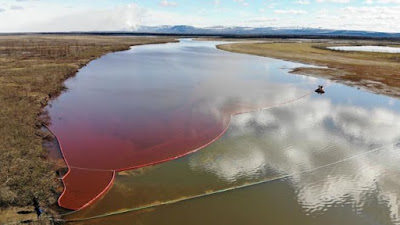 Spilled diesel on the Ambarnaya River in Krasnoyarsk Krai, following the collapse of a fuel storage tank at Norilsk on 29 May 2020. AFP.

The Russian Investigative Committee has launched a criminal enquiry into the Norilsk spill, and the director of the plant at which it occurred, Vyacheslav Starostin, has been arrested and faces charges of negligence and pollution. Specialists in pollution from the Russian Emergencies Ministry have been flown to the scene of the incident, though it is likely that the clean-up process could take several years in what it thought to be the worst oil spill in the Arctic Circle since the Exxon Valdes incident in Alaska in 1989.

Oil spills are potentially harmful to aquatic life in a variety of ways. Most obviously it can coat the outside of organisms, causing damage to external structures such as the feathers of Birds and fur of Mammals, as well as smothering many aquatic invertebrates and plants. It also contains a variety of chemicals which can be directly toxic upset the hormonal balance of many animals. Oil also impedes the feeding of aquatic organisms, coating both food and feeding organs, but provides an excellent food source for Bacteria, which can lead to Eutrophication events - dramatic increases in Bacteria numbers, which then use all the oxygen in the water, leading other organisms to asphyxiate. 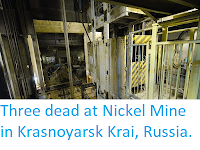 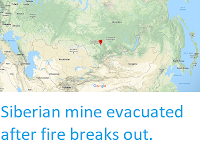 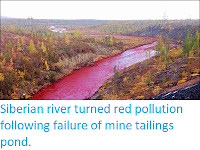 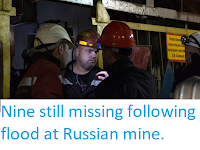