Tulipa toktogulica: A new species of Tulip from the western Tien-Shan Mountains of Kyrgyzstan.

Tulips, Tulipa spp., are one of the most instantly recognisable groups of flowers, with their popularity supporting a billion Euro cultivation industry, and the Plants being considered culturally important in many countries. Despite this, the taxonomy of the group is still somewhat unclear, with estimates of the number of known species varying between 70 and 100, depending on the classification system used. This is because Tulips are highly variable in traits such as flower shape, colour, and even genome size, even within species, making the delimitation of species difficult, and often debatable. 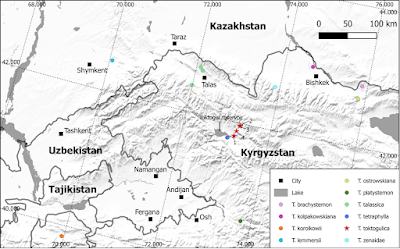 Map of specimens collected for the phylogenetic analysis, excluding Tulipa iliensis and Tulipa altaica, which both lacked GPS information. Populations of the new species Tulipa toktogulica are labelled in order of discovery. Wilson et al. (2022).

Tulipa toktogulica only produces three leaves, with the outermost reaching about 125 mm in length and 15 mm in width, and a solitary flower, about 35 mm in length, slightly fragrant and yellow in colour, apart from the red outer tepals. 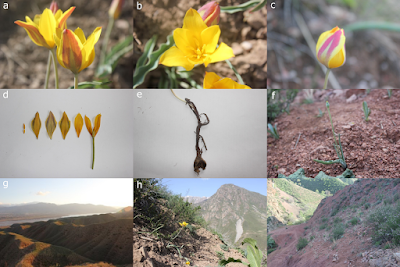 Only four populations of Tulipa toktogulica are known, all from the area to the northeast of the Toktogul Reservoir, with one of these, s in pastureland of the Zagyra Mountains to the south-east of Torkent, in an area heavily grazed by Sheep and Cattle. Wild collecting of Tulips occurs in the area, but there is no commercial trade in the flowers. On the basis of the small number of known populations, and the threat presented to them by overgrazing and climate change, Brett et al. recommend that Tulipa toktogulica be classified as Endangered under the terms of the International Union for Conservation of Nature's Red List of Threatened Species.