At least 32 million people displaced as one third of Pakistan covered by floodwaters.

At least 32 million people are thought to have been displaced as one third of Pakistan has been covered by floodwaters this month, with some estimates placing the figure as high as 50 million. At this time almost 1400 people are known to have died in the floods, including over 400 children. Experts at the Aga Khan University in Karachi have estimated that at least 650 000 pregnant women are among the displaced, with about 70 000 due to give birth in the next month. Estimates of the number of people who will have permanently lost their homes varies between 500 000 and a million. 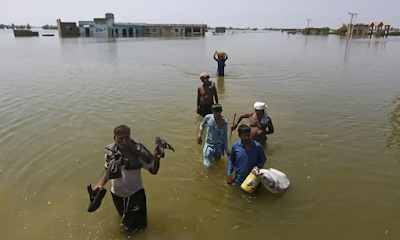 The flooding events are thought to be directly linked to rising global temperatures, with the monsoon rains, which began to fall in the middle of June, being the heaviest ever recorded in the country, 4.64 times the average rainfall for the past 30 years. The problem has been exaggerated by melting glaciers in the Himalayas. Seasonal glacial melting is normal feature of the region, but these glaciers are now melting at a much higher rate, leading both to flood events now, and fears that they will disappear in the near future, leading to a much shorter crop-growing season as water availability becomes entirely reliant on the monsoon. Pakistan's previous worst ever flood event occurred in 2010, when the flow of water on the Indus River reached over 11.3 million litres per second; this year it is expected to pass 19.8 million litres per second. 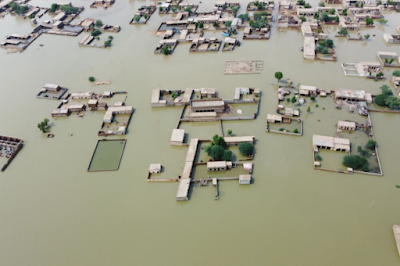 Sindh Province, Pakistan, where the River Indus has burst its banks creating a lake over 100 km wide. Reuters.

As well as the immediate effects of the flooding, there are concerns about the impact this will have on the people of Pakistan both in the coming winter and the longer term. Around 80% of the crops in Sindh Province are thought to have been destroyed, and the vast amounts of standing water left by the flooding are likely to lead to epidemics of Malaria and water-born diseases. The loss of crops is likely to impact not just Pakistan's ability to feed itself, but the loss of much of the revenue earned from growing Cotton, and the accompanying loss of income from manufacturing garments. The flooding is also calculated to have killed over 750 000 head of livestock, over 5700 km of roads and almost 250 bridges. The United Nations has launched an appeal for US$160 million to get Pakistan over the immediate crisis, but has warned that the country is likely to suffer direct economic losses in excess of US$30 billion as a result of the floods, and that the cost of rebuilding the country will cost much more. 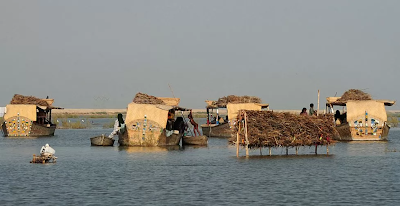 Flooding close to Lake Manchar in Sindh Province, which has also burst its banks. Getty Images.

Pakistan is the world's fifth most populous country, with a population of 220 million, and considered to be one of the ten countries most vulnerable to global warming by the United Nations, despite producing only about 1% of the world's greenhouse gasses.