The planet Jupiter will come to opposition (be directly opposite the Sun) at 7.25 pm GMT on Monday 26 September 2022. This means that it will be at its closest to the Earth this year, about 3.95 AU (3.9 times the average distance between the Earth and the Sun, or about 591 295 000 km), and completely illuminated by the Sun. While it is not obvious to the naked eye observer, the planets have phases just like those of the Moon; being further from the Sun than the Earth, Jupiter is 'full' when directly opposite the Sun. 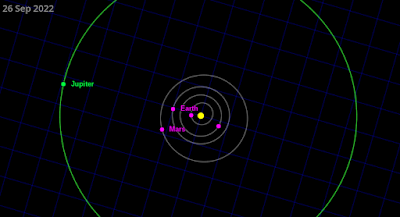 The orbit and position of Jupiter and the planets of the Inner Solar System on 26 September 2022. In the Sky.

While the relative positions of the planets have no direct influence on life on Earth, the opposition of Jupiter does present the best opportunity for observations of the planet by Earth-based observers. On Monday 26 September Jupiter will appear as a bright object in the constellation of Pisces. Seen through a moderate sized telescope both the planet and its larger moons should be visible, and coming the day after a New Moon, viewing will potentially be very good this year.