The Olduvai Gorge in Tanzania is famous for its archaeological sites, notably those associated with early Hominins and the appearance of the genus Homo. However, the area also produces later material, and in particular is home to a number of important Middle Stone Age sites, providing incite into a key stage in the development of Modern Humans. The Middle Stone Age material of the Olduvai Gorge is found within the Ndutu Beds, a succession of tuffacious (volcanic ash), aeolian (wind-blown) and fluvial (river deposited) sediments. These beds can be divided into Upper and Lower units, and are overlain by the Naisiusiu Beds, which produce Later Stone Age material.

Various attempts have been made at dating the Ndutu Beds, none of which is considered definitive. In the 1970s, Richard Hay used amino-acid dating to estimate that the Lower Unit of the Ndutu Beds was laid down between 400 000 and 60 000 years ago, while the Upper Unit is between 60 000 and 32 000 years old. In 1993 Paul Manega used  single‑crystal laser fusion to estimate that the Lower Unit is between 450 000 and 210 000 years old, and that the bottom of the Naisiusiu Beds dates from 42 000 years ago, while a decade later a team led by Anne Skinner dated the start of the Naisiusiu Beds to 62 000 years ago using electron spin resonance.

Two sets of fragmentary Human remains have been recovered from the Ndutu Beds, a palate and maxillary arch considered robust by modern standards, and which was consequently assigned to Homo sp., was described by Mary Leaky in 1971, and  partial calvaria (top part of the skull) assigned to Homo sapiens was described by a team led by Whitney Rainer in 2017. Both of these specimens are derived from the Upper Member of the Ndutu Beds, but neither has been directly dated.

The palate and maxillary arch were found at a location called Dorothy Garrod, which is on the northern side of the Main Olduvai Gorge, 200 m to the west of the KK Fault and opposite the junction with the Side Gorge. Mary Leaky believed the material here was related to the Middle Stone Age material from the Ngaloba Beds at Laetoli, but was not able to date it more precisely. In 1990 Audax Mabulla revisited the area, but again was unable to date the location. In the 2010s a team led by Metin Eren gathered a series of Middle Stone Age stone tools from Dorothy Garrod, but were not able to produce a date for the site.

In a paper published in the journal Archaeological and Anthropological Sciences on 18 August 2022, a team led by José Manuel Maíllo‑Fernández of the Department of  Prehistory and Archaeology at the Universidad Nacional de Educación a Distancia, and the Institute of Evolution in Africa at Alcalá University, presents the results of excavations at Dorothy Garrod, carried out in February and July 2018 and February 2019.

The same team previously carried out excavations at  the Victoria Cabrera Site, 400 m to the southwest of Dorothy Garrod, revealing several layers containing Middle Stone Age tools and faunal remains, which they were able to date to between 86 000 and 75 000 years before the present. 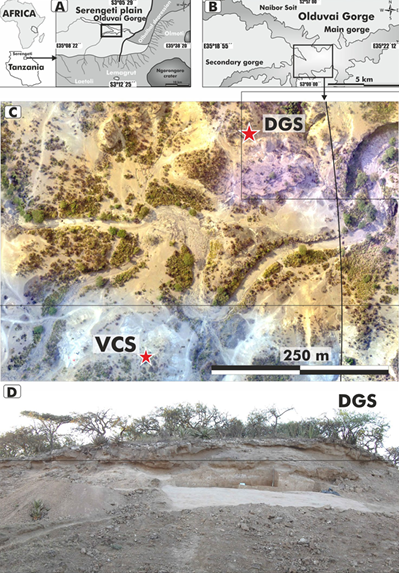 All of the exposed sediments at Dorothy Garrod are attributed to the Upper Unit of the Ndutu Formation, and are assumed to be slightly older than the sediments at Victoria Caberera, based upon their stratigraphic context, but has not been dated more accurately than this. 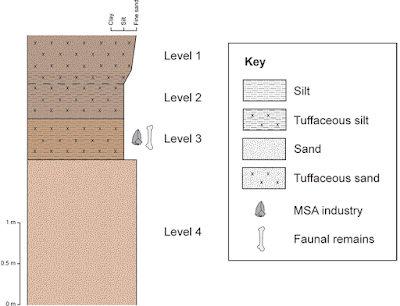 The faunal remains recovered from Dorothy Garrod comprise 247 fragments of bone, 27 teeth and fragments of teeth, two Ostrich shell fragments, and four terrestrial Mollusc shell fragments. Two of the teeth could be identified as those of Equids (Horses, Asses, Zebras etc.), a mandible could be assigned to the Hippotragini (Grazing Antelopes), and four teeth to the Alcelaphini (Wildebeest, Hartebeest, Bonteboks etc.). None of the other tooth or bone fragments could be identified. The bones were generally poorly preserved, at least in part due to the presence of sediment concretions which had affected the surface of many bones. Fifty eight of the bones show evidence of burning, while two (both interpreted as the long bones of Ungulates) have notches cut into them; only one has a carnivore tooth mark. 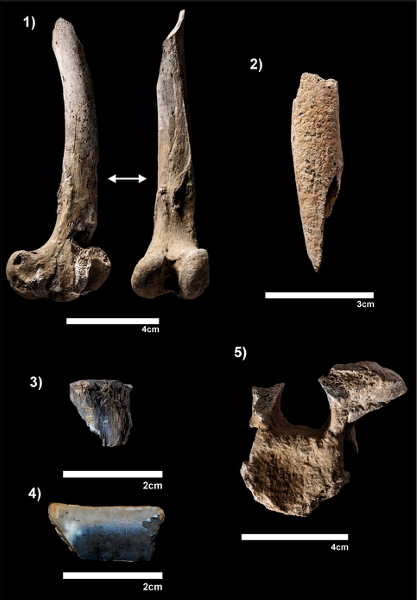 A total of 1179 lithic items were recovered from Level 3 at Dorothy Garrod, 40 of which showed signs of reatouching. Of these tools 113 were excluded from the study due to subsequent alteration, the majority of these being made from phonolite.

Only six pieces showed signs of rounding (i.e. shaping by being rolled in an aquatic environment), and in only one case was this severe, so hydraulic damage (which can sometimes break rocks in a way that can resemble early stone tools) can be ruled out as a cause of the lithic assemblage.

The assemblage included 615 blanks (pieces of rock of suitable size and shape to make stone tools from) with pseudo‑retouching (damage which at first site resembled the actions of a toolmaker). The majority of these are likely to have been caused by trampling, but a few may have been caused by a knapping process, in which they were removed from a rock source.

The majority (79.9%) of the tools at Dorothy Garrod are made from Naibor quartzite, a metamophicly recrystalized sandstone which outcrops at Naibor Soit Hill, 2 km to the north of the Olduvai Gorge. Another 8.2% are made from phonolite, derived from the Engelosen Volcano, 7 km to the north, and 3.6% are made of a basalt derived from the Lemagrut Volcano, 10-12 km to the south. The remainder of the material appears to be locally sourced, including sandstone (6.1%), hyaline quartz (1.4%), chert (0.3%), quartzite (0.1%), and gneiss (0.1%).

Only 7% of the blanks were completely covered by a cortex (the natural surface of a rock caused by chemical weathering, which is removed during toolmaking), while 18% had a partial cortex surface; over 75% had no cortex at all on at least one side.

Of the 757 worked blanks found, 458 could not be associated with any toolmaking scheme, while the remainder were either single platform blanks, or prepared core blanks, either discoid or Levallois. There were no bipolar cores.

Discoidal knapping (removing chips to be used as tools from the surface of a rock by working around it in a circular pattern) was the most common toolmaking method, with 26 discoid cores found, and 222 blanks with chips removed in a discoid pattern. Chips had been removed both unifacially (all from one side) and bifacially (from both sides). The most commonly used rock for this was Naibor quartzite, but some basalt and local quartzite were also used. The knapping had been used to produce chordal flakes, pseudo Levallois points, square f lakes, and flakes wider than they are long. 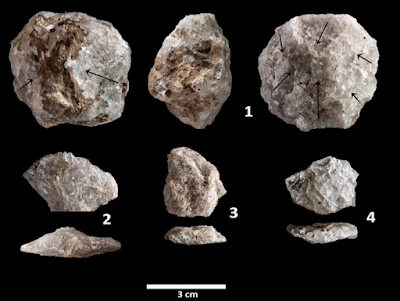 Only 24 blanks and 1 core had been exploited using the Levallois technique; forming a striking platform at one end of a stone tool, then trimming the core's edges by flaking off pieces around the outline of the intended lithic flake, prior to separating the tool with a final blow, which creates a tool with a distinctive plano-convex profile, and leaves a core with a rounded 'tortoiseshell' pattern. The core and the majority of the blanks were made using the centripetal Levallois technique, which can be difficult to tell from the discoidal method, and possibly evolved from it, with the remainder using the preferential, unidirectional, and bidirectional variants of the technique. No Levallois points were found.

Single platform knapping had been used to make 38 flakes and a single core. These were again predominantly made of Naibor quartzite, with phonolite, basalt, and hyaline quartzite also used.

Other cores at the site appeared to have been worked using the polyhedric and/or oportunistic methods (which can be hard to tell apart. A single Kombewa flake (large flake made by striking a core from two different sites) was discovered. 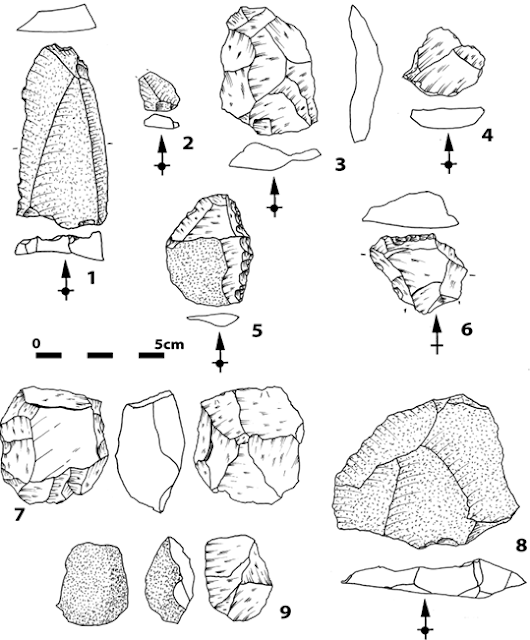 The combination of a plentiful lithic assemblage and faunal remains showing signs of Human modification make the Dorothy Garrod Site a regionally important Middle Stone Age locality. The precise age of this deposit is still unknown, but only an area of 28 m² has been excavated, so it is quite possible that datable material will be uncovered in the future. The material does not appear to be preferentially orientated or abraded, suggesting that it has not been moved significantly by post-depositional processes.

None of the Mammal remains are well preserved, but the vast majority appear to represent Ungulates, and many show signs of modification, either by burning or breaking. Although burning of bones is common, no charcoal usable for dating was recovered. Evidence of modification of the bones by non-Human predators was almost absent.

The majority of the tools found were made for which a manufacturing technique could be identified were made using the discoidal or Levallois methods, with single platform and opportunistic knapping being much less common, and only a single bifacial tool was found, and Levallois points were completely absent. A small number of tools showed signs of retouching. The majority of the tools were made from Naibor quartzite, sourced from a hill 2 km to the north.

The absence of datable material makes it hard to assess the age of the Dorothy Garrod Site, but it may be contemporary with the Kisele industry, found at Mumba Cave near Lake Eyasi and the Nasera Rockshelter in the Ngorongoro Conservation Area, and the Loiyangalanian industry from Loiyangalani in the Serengeti National Park. However, such comparisons are difficult to make; discoidal manufacture is common at almost all Middle Stone Age sites in East Africa, as is the use of materials obtained fairly locally, and while the tool-making appears closest to the Kisele and Loiyangalanian industries, both unifacial and bifacial points are common components of the Kisele industry, but absent at Dorothy Garrod, and bipolar knapping also absent at Dorothy Garrod, is a common feature at Loiyangalani. The low level of retouching at Dorothy Garrod may reflect the material being used; quartzite lends itself to this far less well than chert (rare at Dorothy Garrod) or obsidian (absent altogether).

Although Maíllo‑Fernández et al. have expanded on previous work at Dorothy Garrod, they consider the site still has much more to reveal. The site records a Middle Stone Age technology along with faunal remains almost certainly left by the tool-makers. The site has not been dated, but based upon comparison to tools from other sites it is probably dates from Marine Isotope Stage 5-Marine Isotope Stage 4 (i.e. is between 130 000 and 71 000 years old).

Further excavations at Dorothy Garrod have the potential to resolve the dating of the site, as well as shedding light upon Middle Stone Age patterns of settlement, and how these people interacted with their environment.