Spider Wasps, Pompilidae, are a large and diverse group of (usually) solitary Wasps with a global distribution. They get their popular name from their habit of capturing live Spiders to bury with their young as a food source. Spider Wasps are generally strong flyers with large wings, fused thorax segments, and spiny legs. Each species of Spider Wasp tends to prey on a different species of Spider, or sometimes a few closely related species, with the targeted Spiders often being large species such as Tarantulas, Huntsmen, or Baboon Spiders.

Lord Howe Island is a volcanic island in the Tasman Sea, 600 km of the coast of New South Wales. It has a high proportion of endemic species, although in the 250 years since it was discovered it has been colonised by a wide range of Plants, Vertebrates, and Invertebrates brought in by Humans, either deliberately or by accident.

Despite's the island's high rate of endemism, and the threat presented by introduced species such as Rats, relatively few studies of Lord Howe Island's invertebrate fauna have been made, which presents serious problems for conservation efforts there.

Lord Howe Island is currently known to be home to 318 species of Wasps, 36% of which are endemic to the island. This includes two species of Spider Wasps: the endemic Sphictostethus insularis, and Ctenostegus murrumbidgee, a species widely distributed in Australia, although this species has been identified there on the basis of a single male specimen only. There are also four specimens of unidentified Spider Wasps from Lord Howe Island in the collection of the Australian Museum.

In a paper published in the journal Austral Entomology on 26 August 2022, Juanita Rodriguez and Olivia Evangelista of the Australian National Insect Collection, describe a new species of Spider Wasp from Lord Howe Island.

The new species is described on the basis of a two citizen science expeditions to Lord Howe Island organised by the Australian Geographic Society in October 2017 and October 2018. The new species is placed in the genus Ctenostegus, and given the specific name hansoni, in honour of Luke Hanson of the Australian Geographical Society, for his role in helping to put together the expeditions to Lord Howe Island. The male specimen previously assigned to Ctenostegus murrumbidgee is also considered to be a member of the new species, with the implication that that species should not be considered to be present on the island. 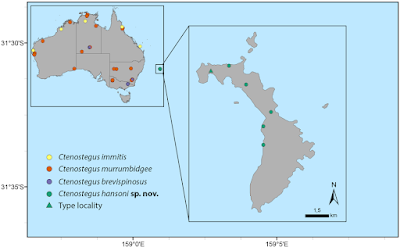 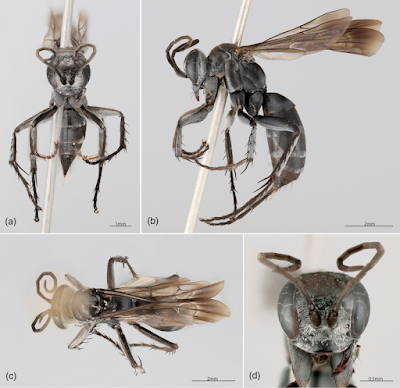