The Late Ediacaran layers of the Portfjeld Formation of North Greenland produce an array of phosphatised microfossils, including embryo-like forms, comparable to those from the Doushantuo Biota of Weng’an in South China, Acritarchs, Cyanobacteria, and some enigmatic helically coiled threads which have tentatively also been assigned to the Cyanobacteria.

Tubular and cylindrical fossils are comparatively common in the Proterozoic. Macroscopic forms begin in the Mesoproterozoic (1600 to 1000 million years ago) with fossils such as the carbonaceous Tawuia, which first appears in the Chorat Sandstone of Central India and persists into the Ediacaran, with a more diverse assemblage appearing in the Ediacaran, including the carbonaceous Sabellidites, and the mineralised Cloudina. Rod-like and filamentous tubular microfossils also become abundant in the Ediacaran, although these can be hard to classify due to the wide range of preservation methods, including compressions, casts, molds, and replacement fossils in silica and phosphatic materials.

Interpreting such simple fossils is difficult, and suggestions for their origin have included Bacterial colonies, filamentous Algae, and early Animals, possibly related to Annelids or Cnidarians.

A number of nonbranching and helically coiled tubular microfossils from the Portfjeld Formation have previously been described under the name Jiangispirellus groenlandicus, with has annulations, and Spirellus, which lacks annulations and has an enclosing, often calcified sheath, both of which have been interpreted as Cyanobacteria.

In a paper published in the Journal of Paleontology on 2 June 2022, Sebastian Willman and John Peel of the Department of Earth Sciences at Uppsala University, describe a new tubular microfossil from the Portfjeld Formation of North Greenland.

The description is based upon material collected by John Peel and Peter Frykman in July 1978, from an outcrop of the Portfjeld Formation on the north side of Wandel Dal, west of Øvre Midsommersø, the western of the two lakes comprising the Midsommersøer. 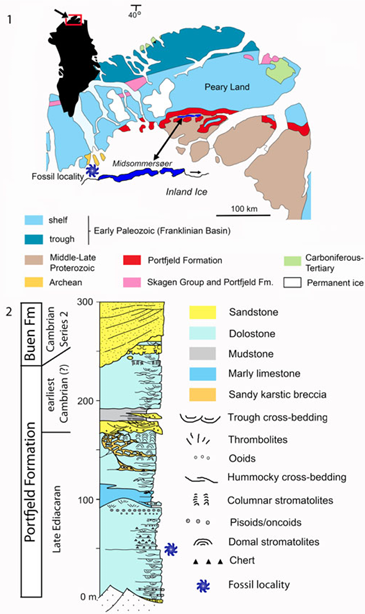 The microfossil is named Portfjeldia aestatis, where 'Portfjeldia' is a reference to the Portfjeld Formation, and 'aestatis' means summer, a reference to the location where it was found (Midsommersøer means 'Midsummer-lakes'). Portfjeldia aestatis is a cresent-shaped annulated tubular fossil with two or three slender, slowly expanding, internal tubules. The annulations on the external surface do not appear to correspond to any form of internal segmentation. The tube is not circular in cross section, and has longitudinal groves where it it adpressed against the internal tubules, probably implying that it was flexible in life. The internal tubules run parallel to one-another along the entire length of the preserved outer tubes. The best preserved section of tube, designated as the holotype, is about 400 μm in length, and about 45 μm wide, with the inner tubules being about 20 μm wide with an internal cavity about 10 μm wide. 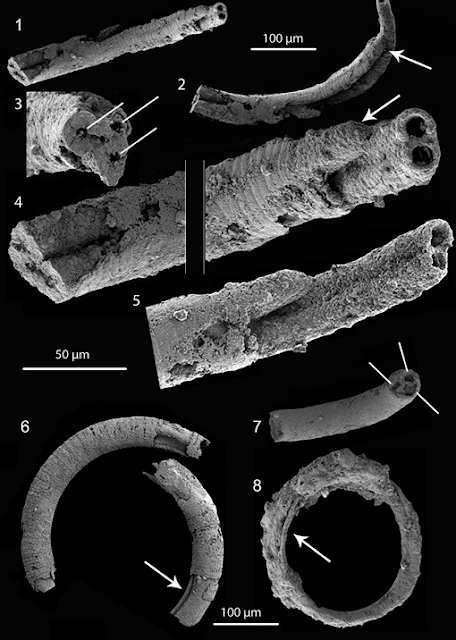 Willman and Peel also describe another distinctive tubular microfossil, but decline to name this as only a single specimen is known, and this was found within the helical coil of a specimen of Jiangispirellus groenlandicus, making it impossible to say there is not a relationship between the two. This specimen is almost 2 mm in length, with a diameter of about 20 μm, and a central opening running along its length about 10 μm in diameter. 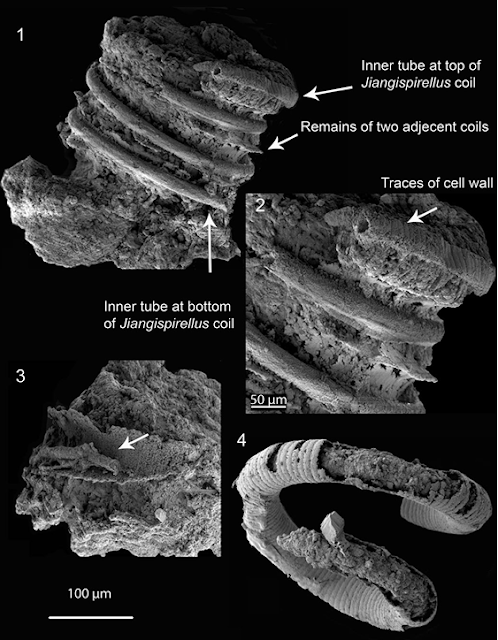 Ediacaran deposits have produced a wide range of tubular fossils of varying sizes, and debatable origins. The majority of the larger tubes are likely to have been produced by Metazoans (Animals), and some may have been biomineralised. As such, understanding these tubes is thought to be a key step to understanding the origin of the Animals as a whole. Many of these macroscopic fossils share morphological similarities to the microfossils Willmand and Peel describe from the Portfjeld Formation, being slightly-curved to sinuous, and occasionally branching. However, the macro- and microfossils are not identical in morphology, which, combined with the size difference between the two groups, makes it impossible to say if they are genuinely related or just show convergent morphology.

Microscopic tubular and filamentous fossils have variously been interpreted as Cyanobacteria, Algae, and Fungi. It is seldom even possible to say with any confidence whether these tubes were made by prokaryotic or eukaryotic organisms, due to the overlap in size between the two groups, although a number of 'grades' of structure have been proposed to try to separate different groups of tube-makers.

Tubes of sizes similar to the ones Willman and Peel describe from the Portfjeld Formation are known to be made by extant Cyanobacteria, such as Microcoleus, and Schizothrix, as well as sulphur-oxidizing Bacteria such as Thioploca. Forms such as the extant Trichodesmium even form bundles of filaments, as seen in Portfjeldia aestatis, and Subtifloria, an Ediacaran-Cambrian calcarious fossil comprising bundles of filaments, also interpreted as a Cyanobacteria. However, such bundles of filaments are not usually contained within an outer sheaf, and it is difficult to imagine what the advantage of such a sheaf would be to a photosynthetic Cyanobacterium.

Subtifloria is known from the Late Eidacaran deposits of Shaanxi Province, China, where it forms part of an assemblage that also includes forms interpreted as Oscillatorialean and Rivulariacean Cyanobacteria, some of the most complex members of the group today. The Shaanxi and Portfjeld Ediacaran biotas both contain Obruchevella, a helical microfossil possibly also made by a Cyanobacterium, as well as Jiangispirellus and Spirellus, suggesting a possible link between the two sites.

Complex modern Cyanobacteria, such as those of the Order Nostocales, develop distinctive resting cells towards the end of their annual growth cycle, which can produce new filaments when conditions improve again, building up Cyanobacterial mats over time. The specimens from Portfjeld appear to be of a much more complicated nature than anything seen in such Cyanobacteria, and may well themselves be part of a larger and mote complex organism, making it unlikely the fossils are of Cyanobacterial origin.

The organism found preserved within the coil of a specimen of Jiangispirellus groenlandicus could be interpreted as a specimen of that organism, but for the presence of an internal cavity. Again, its general morphology is consistent with a Cyanobacterial origin, but its position within the coil of another calcified organism seems unlikely for anything which was reliant on photosynthesis to survive.

Eukaryotic Algae are important members of many modern ecosystems, both aquatic and terrestrial, and come in a wide range of forms. Neoproterozoic Algae can usually be identified either by a branching structure or the presence of more than one type of cell. The earliest form of multicellular Eukaryotic Algae, filamentous Red Algae, probably appeared at around the beginning of the Mesoproterozoic (1600 million years ago), while the first filamentous Green Algae probably appeared at around the beginning of the Neoproterozoic, about 1000 million years ago. The general shape and size of  Portfjeldia aestatis, this appears quite likely to be an Algae, although the internal tubules are unlike anything known from any Algal group, living or fossil.

Ediacaran deposits contain a wide variety of macrofossils which may-or-may-not represent early Animals. However some, such as the bilaterally symetrical Kimberella, are now generally accepted as being true Animals, in addition to which trace fossils have been found at a number of Ediacaran sites, leading to the possibility that fossils from Ediacaran deposits may represent Animals or parts of Animals.

Mineralised tubular fossils are also common in the Ediacaran, and an Animal origin has been suggested for many of these, such as the Anabaritids, globally distributed tubular organisms that grew by accretion around the aperture and showed a triradial symmetry, which have been suggested as possible stem-group Cnidarians.

Another possibility is that the inner tubules of Portfjeldia aestatis are not part of the same organism as the outer tubes, but some form of cavity dwelling micro-organism which has secondarily occupied the tubes. Such behaviour is found in a variety of different organisms, including Bacteria, Algae, and Fungi. Such organisms will often occupy tubes created by other organisms, although the filamentous shape of Portfjeldia aestatis is unlike any known such organism, which tend to be more mesh-like in organisation, on which basis Willman and Peel consider this to be an unlikely scenario.

Given the possible alternatives, Willman and Peel believe that the most likely explanation is that Portfjeldia aestatis is some form of Algae, albeit one unlike any modern form.