A fossil Snake from the Cretaceous of Brazil.

Snakes are generally accepted to have appeared and diversified during the Mesozoic, though their fossil record is not extensive. This is due to their lightly mineralized, easily disarticulated skeletons, which tends to result in Snake fossils, where they are found at all, tend to be poorly preserved and fragmentary. Nevertheless, by the late Cretaceous, a reasonable diversity of Snakes is known from sites across the world. How these early forms are related to modern Snakes is unclear, some retained limbs, and clearly could not be placed in any modern group, others are placed in extinct family Madtsoiidae, which died out in the Pleistocene, but most are too fragmentary for any taxonomic assignment. Fossils which can be placed with reasonable confidence in modern groups appear in the Palaeocene-Eocene.

The species is described from a pair of disarticulated mid-trunk vertebrae, not assumed to come from the same animal, though they are distinctive enough to say that they are Snake bones, and probably come from the same species. This is not unusual with Snakes fossils; the animals gain their extreme flexibility from having bones only lightly mineralized and loosely held together with tendons and muscles. 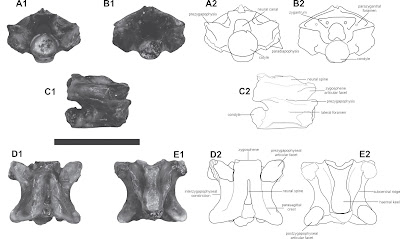 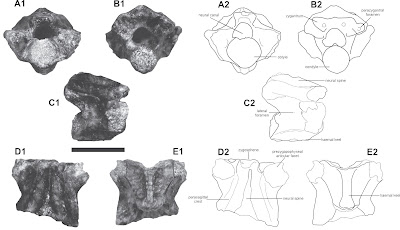 Due to the fragmentary nature of this material, it is not possible to say how this species is related to other Cretaceous or modern Snakes, but it is considered to be the oldest known Snake yet discovered in Brazil.

Map showing the locality where the specimen was found. Hsiou et al. (2013).