The Daohugou Beds are a fossil Lagarstätte from Ningcheng County in Inner Mongolia, which have produced a large number of well preserved Middle Jurassic Vertebrates, Insects, Plants and other fossils. The fauna has been considered to be part of the Jehol Biota, but is now generally considered to be slightly earlier. The deposits formed in lake surrounded by a moist, warm-temperate forest, dominated by Conifers, Ginkos and Cycads.

Two species of Salamander are very abundant in the Daohugou Beds, with over 600 individual animals having been recovered from the deposits, and specimens of both have been found with intact stomach contents.

Jeholotriton paradoxus is a Newt-sized Salamander considered to have undergone only partial metamorphosis; the adults retained external gills as in the modern Axolotl and Tiger Salamanders. Two specimens of Jeholotriton paradoxus have been found with intact stomach contents. Both contain numerous Conchostracans (Clam Shrimps); which are an important part of the diet of many small modern Salamanders. 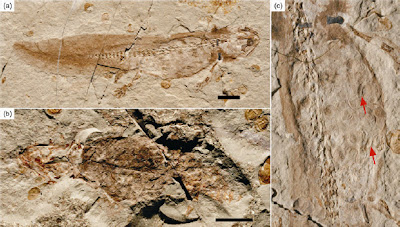 Chunerpeton tianyiensis is a slightly larger animal, typically reaching around 180 mm in length; it is thought to be related to the modern Hellbender and Giant Salamanders, though it does not reach the large size of these modern species. Like Jeholotriton paradoxus (to which it is not thought to be closely related) Chunerpeton tianyiensis appears to have retained external gills into adult life. Nine specimens of Chunerpeton tianyiensis are preserved with intact stomach contents, though none of these are mature individuals, ranging from 30 to 62 mm in length. All of these contain the insect Yanliaocorixa chinensis, a form of Corixid (Water Boatman) which is an abundant member of the Dauhugou Biota. It is common for modern Amphibians to switch prey animals as they mature, feeding on larger animals as they grow. The presence of Yanliaocorixa chinensis in individuals of a limited size range suggests that this was the case in Chunerpeton tianyiensis. Water Boatmen have tough, waxy integuments, which may have helped their preservation in the stomachs of deceased Salamanders, which larger individuals probably fed on small vertebrates which had lower preservational potential as stomach contents. 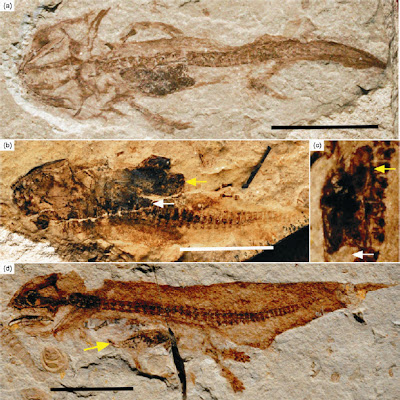 Chunerpeton tianyiensis with corixids preserved as stomach contents. (a) Specimen with one corixid in its belly; (b) Specimen with two corixids shown by arrows; the yellow arrow indicates a corixid with a disarticulated wing on its right side; (c) enlarged view of the corixid in the belly of specimen shown in (a); the yellow arrow indicates the disarticulated head, and its original position is indicated by the white arrow; (d) specimen preserved laterally with one corixid in its belly showing its hind leg. Scale bars: 10 mm. Dong et al. (2012).

See also An immature Temnospondyl Amphibian from the Late Triassic of Brazil, A new species of Asian Warty Newt from Guizhou Province, China and A Salamander from the Late Jurassic of China.