A new species of Hydrozoans from British Columbia.

Hydrozoans are simple members of the Phylum Cnidaria, which also includes Jellyfish, Corals and Sea Anemones. They typically have a simple tubelike structure, one end attached to the a substrate the other having a mouth surrounded by ring of tentacles, which are used to catch prey. This mouth doubles as the anus; like other Cnidarians Hydrozoans lack a through gut. Some Hydrozoans are colonial, with fused polyps (the equivalent of the whole body of an individual) sharing a common gut. The Portuguese Man of War is a highly modified colonial Hydrozoan.

In a paper published in the journal Zootaxa on 31 May 2013, Anita Brinckmann-Voss and Dale Calder of the Invertebrate Zoology Section of the Department of Natural History at the Royal Ontario Museum, describe a new species of Hydrozoan from inshore waters near the northern tip of Vancouver Island, British Columbia.

The new species is placed in the genus Zyzzyzus, and given the specific name Zyzzyzus rubusidaeus, meaning 'raspberry coloured'. It is a raspberry-red Hydrozoan growing in clumps at a depth of about 18 m in the waters of Broughton Strait, to the north of Vancouver Island. The individual polyps are about 5 cm long and about 0.5 cm wide. It was not possible to tell if the clumps were clones that arose by budding or if separate individuals were forming clumps for some reason. 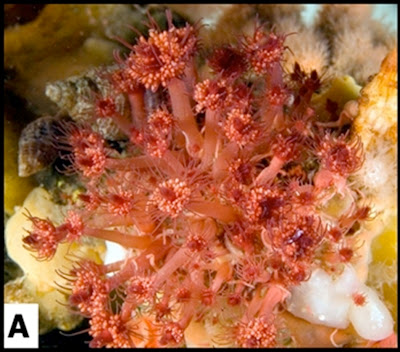 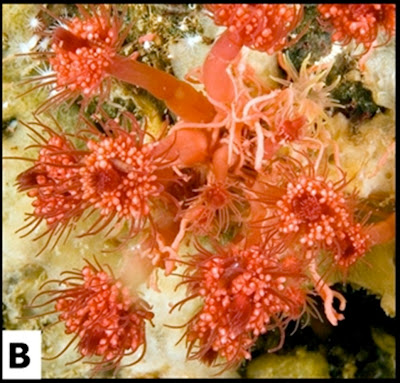 Zyzzyzus rubusidaeus, live aggregation of polyps, from nature. (A) Entire aggregation. (B) Closer view of an aggregation, showing polyps and gonophores. Brinckmann-Voss & Calder (2013). 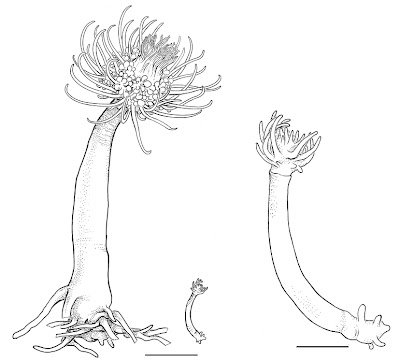 See also The mysterious ebb and flow of Jellyfish populations, The vanishing Corals of Pelorus Island, Building an artificial Coral Reef on Pulau Weh, Indonesia and Coral decline on the Great Barrier Reef.