Fossil Tapeworm eggs from the Permian.

Tapeworms (Cestoda) are parasitic Flatworms that live in the digestive tracts of Vertebrate hosts, attaching themselves to the intestine wall and absorbing nutrients through their skins. Adult Tapeworms engage in sexual reproduction, producing eggs which are passed out of the host in its feces. Juvenile Tapeworms often inhabit one or more intermediate hosts before reaching their final adult stage, growing in the gut till they reach a certain size, then migrating to other tissues where they form cysts, becoming dormant till the animal dies and is eaten by the next host in the life-cycle.

In a paper published in the journal PLoS One on 30 January 2013, a team of scientists led by Paula Dentzien-Dias of the Laboratório de Paleontologia e Paleoceanografia at the Instituto de Oceanografia at the Universidade Federal do Rio Grande, announce the discovery of a number of fossilized tapeworm eggs in a coprolite (fossil feces) from the Mid to Late Permian Rio do Rasto Formation in the
municipality of São Gabriel in southern Brazil.

The coprolite is interpreted to have come from a Shark, due to its distinctive spiral shape, which is still seen in the feces of modern Sharks. The eggs are smooth shelled, ovoid structures 145–155 μm long, grouped together in a 1 × 4 mm cluster. This arrangement is typical of modern Tapeworms, who periodically shed clusters of eggs inside cast off body segments (proglottids). 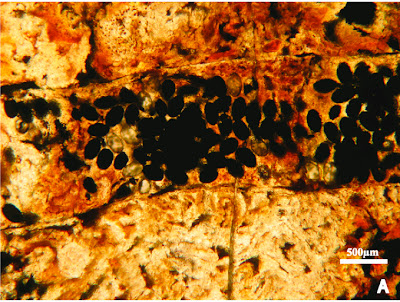 The cluster of eggs from the Permian Shark coprolite in thin section. Dentzien-Dias et al. (2013).

Some of the eggs appear broken, and one has a developing embryo preserved. This egg only possesses part of the outer capsule, but retains a multi-layered inner capsule surrounding the embryo. Dentzien-Dias et al. theorize that the outer capsule has undergone apoptosis as modern Tapeworm eggs do. 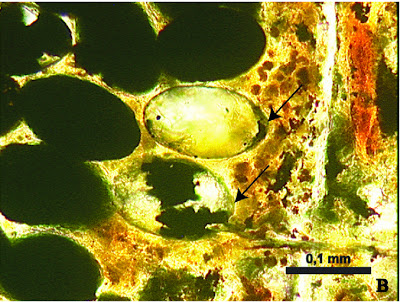 
The coprolite contains pyrite inclusions, which suggests it almost certainly sank into anoxic waters; the fossil bed it was found in is thought to have formed at the bottom of a freshwater lake. Coprolites with pyrite and preserved Tapeworm eggs have previously been found at neolithic sites, supporting this method of preservation, but nothing remotely as ancient as this find, which is thought to be around 270 million years old. Since it is more-or-less impossible to tell modern Tapeworm eggs apart visually, no attempt at lower level classification of the eggs is made. 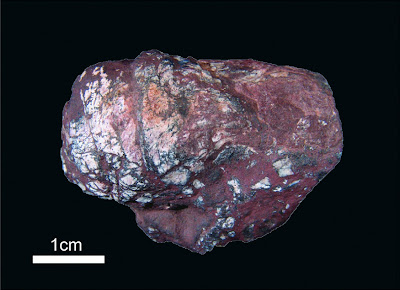