Two women have been killed, and a further two injured, in a landslide at Chhapari Village in the Nepalese part of Darchula District (part of the district lies in the Indian province of Uttarakhand), following heavy rains. The women, who were collecting fodder at the time of the incident, have been named as Manamati Devi Bam, who died instantly, Dhana Devi Bam, who died of her injuries while undergoing treatment, and Madhavi Devi Bam and Sarawoti Bam, who are undergoing treatment in a hospital on the Indian side of the border. 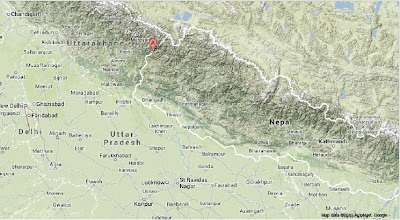 The location of the Chhapari landslide. Google Maps.


Nepal and Uttarakhand have suffered extensive flooding following the onset of the Monsoon Season earlier this month. This has lead to a number of landslide events, as well as rivers bursting their banks and the partial collapse of the Chorabari Glacier in Uttarakhand. Landslides are a common problem after severe weather events, as excess pore water pressure can overcome cohesion in soil and sediments, allowing them to flow like liquids. Approximately 90% of all landslides are caused by heavy rainfall, but the situation in Uttarkhand is thought to have been made much worse by extensive deforestation, sand extraction and quarrying (much of it illegal) and unregulated building construction across the affected area.