A Freshwater Mosasauroid from the late Cretaceous of Hungary.

Mosasauroids were large marine Lizards that became dominant marine predators in the Late Cretaceous after the disappearance of the Ichthyosaurs. They were related to Monitor Lizards, but fully adapted to an aquatic environment, with flipperlike limbs and elongate, streamlined bodies, probably coming ashore only to lay eggs like modern marine Turtles. The smallest members of the group reached about three meters in length, the largest were over seventeen meters long.

The new species is named Pannoniasaurus inexpectatus, meaning the unexpected Lizard from Pannonia; Pannonia being the Roman name for the region where the fossils were found. The species is described from a large number of disarticulated bones from a flood breccia (conglomerate deposit formed by a flash flood) exposed at the Iharkút open-pit bauxite mine in the Bakony Hills of Western Hungary since 2000. Such disarticulated remains are difficult to work with, but in this case are so numerous as to allow a reasonable reconstruction of the living animal. 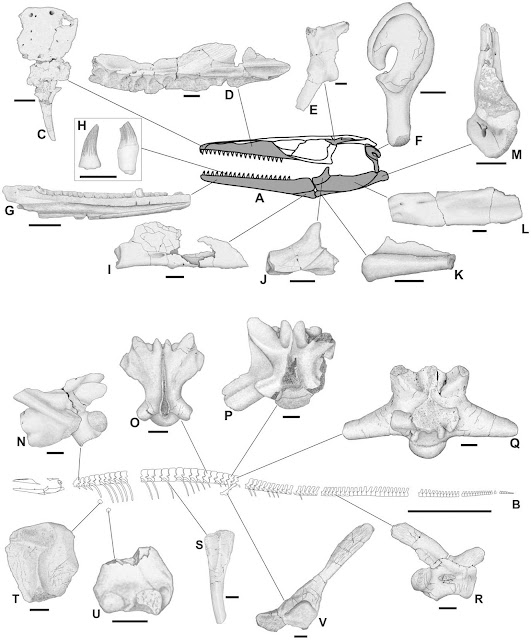 Pannoniasaurus inexpectatus appears to have been a Crocodile-like animal reaching up to seven meters in length, though most of the remains appear to come from animals of between three and four meters. It has a flattened skull, suggesting it lived as an ambush predator operating in shallow water, similar to modern Crocodiles.

This is the first known Mosasauroid that appears to have lived entirely in freshwater (some previous specimens have been found from estuarine deposits). As wells as the sedimentological evidence that this is a fluvial flood deposit Makádi et al. carried out a number of geochemical tests, all of which point to a freshwater, rather than a marine, origin for the deposits where the specimens where found.

Apart from being disarticulated the fossils show little sign of wear and tear; this implies that the specimens were not moved far in the flood, but that they were from animals that had pre-deceased the flood event (allowing them to become disarticulated), but not attacked by scavengers (which leave distinctive marks on bones. This suggests that the animals were either quickly buried or submerged in anoxic waters, then exhumed and redeposited by the flood event.