The bite of the Megapiranha.

Piranhas are carnivorous Characid Fish from the Amazon river basin with a reputation for stripping large animals to the bone in seconds. While this reputation is unquestionably exaggerated, Piranhas are still formidable predators, capable of delivering powerful bites and tackling large prey. In the Late Miocene South America was home to a much larger fish, Megapiranha paranensis, which is thought to have exceeded a meter in length, and which if like modern Piranhas in habit, would have been a truly terrifying predator. However Megapiranha is known only from a partial premaxilla (part of the upper jaw) with three teeth, which are intermediate between those of Piranhas and the related, but herbivorous, Pacus, so some ichthyologists have questioned if Megapiranha was actually a carnivore at all. Pacus are considered to be amiable, even affectionate fish in the aquarium trade; though as their diet includes tough nuts which they crack with their teeth, it is still best to avoid being bitten by one. 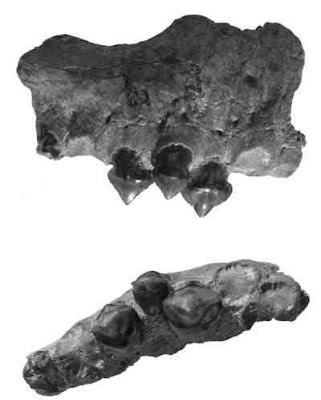 The only known remains of Megapiranha paranensis. Clone et al. (2009).


In a paper published in the journal Nature Scientific Reports on 20 December 2012, a team of scientists led by Justin Grubich of the Department of Biology at the American University in Cairo, the Division of Fishes at The Field Museum of Natural History and the Biology Department at Western Kentucky University, describe the results of an investigation into the biting power of the modern Black Piranha, Serrasalmus rhombeus, and the implications for this on the biting power of Megapiranha paranensis.

Grubich et al. found that a 170 g Serrasalmus rhombeus was capable of delivering a bite with a force of 67 N, while a 1.1 kg fish could deliver a bite of 320 N, the largest bite/size ratio ever recorded in any form of Fish (including Sharks) and three times as powerful as an equivalent sized American Alligator. Scaled up to the estimated size of Megapiranha paranensis this would imply a bite strength of between 1240 N and 4749 N, equivalent to the bite of a 3000 kg Great White Shark.

If this is correct, and the strength of the bite in a Piranha is largely controlled by the adductor mandibulae muscle complex, which is not preserved in Megapiranha paranensis, then the fish would have been capable of quickly biting through the armour of the largest Armoured Catfish and Turtles of Miocene South America, and of doing significant damage to the limbs of some of the large Mammalian Megafauna extant at the time. 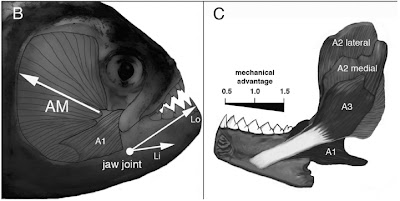 This bite would be a third of the estimated strength of the bite of Tyrannosaurus rex, which is considered to have been over a hundred times the size of Megapiranha paranensis, and would vastly exceed the estimated size-to-mass ratio of any other living or fossil Fish, including the enormous whale eating Carcharodon megalodon and the monstrous Devonian placoderm, Dunkleosteus terrelli.

This should sound a note of caution on this study; it is a truism in science that extraordinary claims need to be backed up with extraordinary evidence, and no evidence is available on the morphology or behavior of Megapiranha paranensis. Furthermore its dentition is not the same as that of Serrasalmus rhombeus, which strongly suggests that other elements of its biology were different too. The study has revealed that the bite of Serrasalmus rhombeus is truly remarkable, and suggests that Megapiranha paranensis was also a remarkable Fish, but the claims about the biting power of Megapiranha paranensis are not supported by the available evidence.