Coming down from the trees.

One of the traits that is used to determine that fossil primates are part of the Human lineage, rather than that which leads to Chimpanzees and Bonobos (our closest relatives) is the structure of the ankle. Because of this palaeoanthropologists have tended to assume that the abandonment of an arboreal lifestyle for a life on the open plains of Africa was the defining ecological change that led our ancestors to diverge from those of the Chimps and Bonobos, and that hominids with human-like ankles would be incapable of climbing trees in a similar way to Chimpanzees.

In a paper published in the Proceedings of the National Academy of Sciences of the USA on 22 January 2013, Vivek Venkataraman, Thomas Kraft and Nathaniel Dominy of the Departments of Biological Sciences and Anthropology at Dartmouth College, examine the tree climbing abilities of modern forest dwelling hunter gatherers several different parts of the world, and conclude that they are not notably different from those of Chimpanzees. 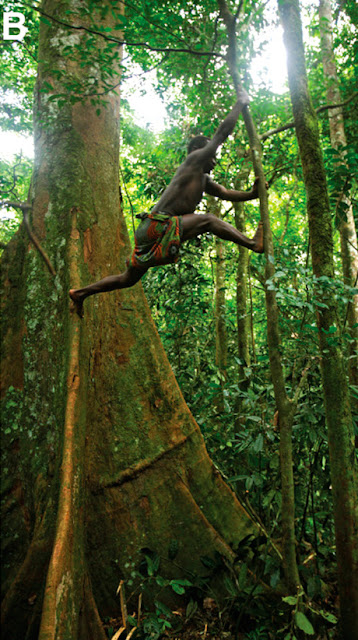 A modern African hunter-gatherer climbing a tree. This is risky and often requires extraordinary bridging abilities in the understory and canopy. Bruno Zanzottera in Venkataraman et al. (2013).

Humans that habitually climb trees from an early age are able to flex their ankle joints to a similar extent to Chimpanzees. This is reflected in their leg musculature, but not in their skeletons. It is commonly asserted Australopithecus afarensis, and all subsequent hominids, had a terrestrial lifestyle unlike that of Chimps and Bonobos, due to their human-like ankle structure. Venkataraman et al. conclude that this argument is not supported by the available evidence; Australopithecus afarensis may-or-may-not have had a terrestrial lifestyle, but its human-like ankle joints shed little light on this, since some modern human populations climb trees as freely as Chimpanzees. 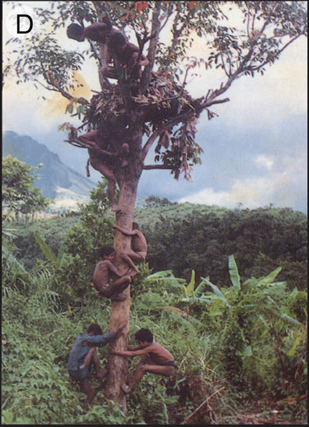 Aeta children in the Philippines climb during play in a variety of styles. Carmen Balazo  in Venkataraman et al. (2013). 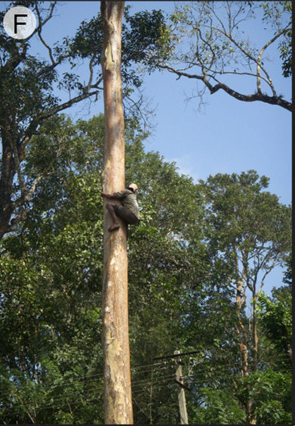 A Jenu Kuruba man in Southern India climbs a large-diameter tree with smooth bark by inverting his ankles and hugging the trunk. Kathryn Demps in Venkataraman et al. (2013).

See also Signs of malnutrition in a 1.5 million year old child's skull from the Olduvai Gorge, Skull closure in the Taung Infant, The earliest evidence of fire use from million year old sediments in Wonderwerk Cave, Northern Cape Province? Trying to find Peking Man and The canine teeth of Australopithecus anamensis.