Mount Pavlof, an active volcano on the Alaska Peninsula, which has been erupting intermittently since mid-May 2013, underwent a sharp increase in seismic activity on 24 June, accompanied by an increase in explosive eruptions, ash and lava production, according to the Alaska Volcano Observatory. On 25 June it produced an ash column 8.5 km high, which drifted to the southwest, causing an ashfall in King Cove, 48 km away. Since then there has been only minor ash and lava production on the volcano, but infra-red satellite images are still showing a strong thermal signal, suggesting the presence of a large magma body with the potential to trigger further eruptions. 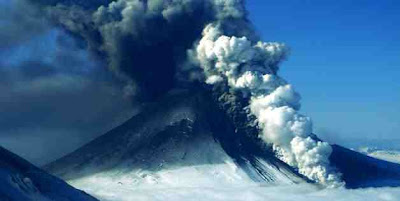 Pavlof is a 2500 m high, 7 km wide stratovolcano (cone-shaped volcano) between Cold Bay and Pavlof Bay near the tip of the Alaskan Peninsula. It has several active vents on its north and east flanks, it's remoteness and inaccessibility meaning that it is usually hard to tell from exactly which of these an individual eruption is occurring. Pavlof is considered to be one of America's most active volcanoes, and though it is located in a remote spot with no settlement close by, it still presents a serious threat to air-traffic.

The volcanoes of the Alaskan Peninsula and Aleutian Islands are fed by magma rising from the Pacific Plate, which is being subducted beneath the North American Plate to the south. As the subducting plate sinks into the Earth it is subjected to enormous heat and pressure, causing more volatile minerals to melt. These then rise through the overlying North American plate as magma, fueling the Alaskan volcanoes.