Palaeopathology is the study of disease and injuries in fossil remains. The way in which an organism responds to infection can tell biologists a lot about its ecology and lifestyle, and this is more true of palaeobiologists, who are working with fossil organisms that cannot be directly observed in the field.

In a paper published in the Chinese Science Bulletin in April 2013, a team of scientists led by Xing LiDa of the Department of Biological Sciences at the University of Alberta and the School of the Earth Sciences and Resources at the China University of Geosciences describe a right maxilla of a Theropod Dinosaur, Sinosaurus triassicus, from the Early Jurassic Lufeng Formation of Yunnan Province, China.

The Lufeng Maxilla has two broken teeth in place, as well as several empty tooth sockets where teeth appear to have been lost after the animal died. However one of the sockets shows closure of an open socket by secondary bone growth, implying the tooth was lost while the animal was alive and the socket subsequently healed before the animal died. 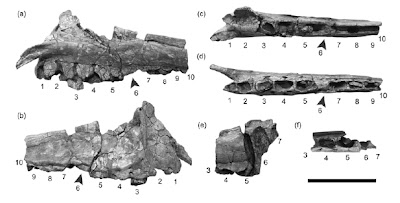 Modern mammals commonly show remodeling of the maxilla and mandible in response to tooth loss, abscesses or other injuries. Modern Reptiles on the other hand seldom show such remodeling. This suggests that Sinosaurus triassicus must have had a lifestyle and metabolism more akin to a modern Mammal than to a Reptile.