Three people have died as Tropical Storm Kong-Rey crossed the populous south and west of Taiwan on Thursday 29 August 2013. A man drowned after falling from a motorbike in Pingtung County in the south of the country, and two women died in Yunlin County, one drowning wjile trying to get to work and one by electrocution in her home. Over 500 mm of rain fell across much of the affected area, leading to widespread flooding. Around 3600 people had to be evacuated from their homes and many public transport services were not running. It is thought that there was also severe damage to many crops in the area. The storm is currently moving towards Japan, but has lost much of its energy and is not thought likely to cause severe problems there. 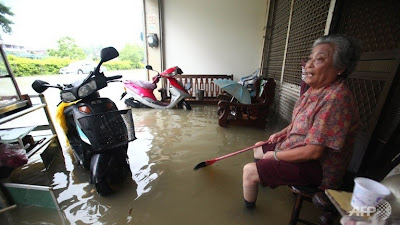 A woman sits in front of her flooded home in Tainan, southwest Taiwan on Thursday 29 August 2013. AFP.


Tropical storms are caused by solar energy heating the air above the oceans, which causes the air to rise leading to an inrush of air. If this happens over a large enough area the inrushing air will start to circulate, as the rotation of the Earth causes the winds closer to the equator to move eastwards compared to those further away (the Coriolis Effect). This leads to tropical storms rotating clockwise in the southern hemisphere and anticlockwise in the northern hemisphere.These storms tend to grow in strength as they move across the ocean and lose it as they pass over land (this is not completely true: many tropical storms peter out without reaching land due to wider atmospheric patterns), since the land tends to absorb solar energy while the sea reflects it. 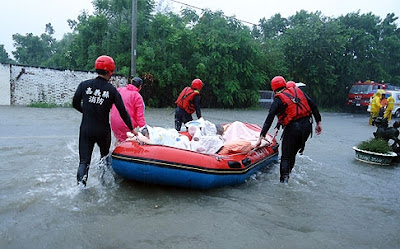 Vulnerable people being evacuated by boat in southeast Taiwan on Thrusday 29 August 2013. Xinhua.