A fossil Ape from the Late Miocene of Yunnan Province China.

Apes (Hominoidea) are large, tailless Primates found in Africa, eastern Asia, and in one case (Homo sapiens) globally. Apes are commonly divided into Lesser and Great Apes, with the 17 species of Gibbon (Hylobatidae) considered Lesser Apes and the remaining Orangutans, Gorillas, Chimpanzees and Humans as Great Apes (Hominidae). The Apes are thought to have diverged from the Old World Monkeys (Cercopithecidae) between 29 and 34.5 million years ago, with the Gibbons splitting from the Great Apes about 18 million years ago, and the Great Apes splitting into Asian and African lineages about 14 million years ago.

In a paper published in the Chinese Science Bulletin on 1 November 2013, a team of scientists led by XuePing Ji of the Department of Paleoanthropology at the Yunnan Institute of Cultural Relics and Archaeology, and the Yunnan Key Laboratory for Paleobiology at Yunnan University, describe the partial skull of a juvenile Ape from the terminal Miocene of the Shuitangba Lignite Mine (an open pit coal mine) in northeastern Yunnan Province. 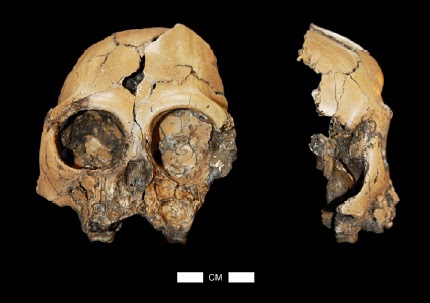 The Shuitangba Ape skull in frontal view (left) and lateral view (right). Note that the actual contour of the frontal squama in lateral view is somewhat distorted by the displaced bone of the left portion of the frontal. Ji et al. (2013).

To date three species have been assigned to the genus Lufengpithecus, though skull material has been rare and fragmentary for all of these. The genus was formerly thought to be part of the lineage that lead to the modern Orangutans (‎Ponginae), though this has been disputed in recent years. The Shuitangba skull shows no features associated with Orangutans, strongly supporting the idea that these Apes form part of a separate, extinct, Asian Ape lineage. 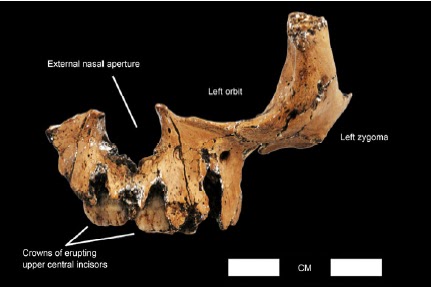 The nasoalveolar and left malar regions of the Shuitangba Ape skull. The central incisors had begun to erupt but had not yet emerged beyond the alveolar margin. This fragment can be approximated to its original position but it cannot be reattached to the rest of the cranium because of damage along the cleavage plane between the two portions. Ji et al. (2013).