A giant Metriorhynchid Crocodylomorph from the Middle Jurassic of England.

The Metriorhynchids were Mesozoic Crocodylomorphs adapted to a fully aquatic marine lifestyle. Their limbs were modified into paddle-like flippers, they has a shark-like tail-fin and had lost the osteoderms in their skin. Meriorhynchids appear to have been fully pelagic, i.e. capable of swimming freely in ocean currents, rather than being restricted to inshore environments. The Meriorhynchids appeared in the Middle Jurassic and survived into the Early Cretaceous.

In a paper published in the Journal of Systematic Palaeontology on 4 January 2013, a team of scientists led by Mark Young of the Institute of Biodiversity, Animal Health and Comparative Medicine at the University of Glasgow, and the School of Geosciences at the University of Edinburgh, describe a new species of Metriorhynchid Crocodylomorph based upon fragmentary material excavated from a clay it at Fletton in Cambridgeshire by Alfred Leeds between 1907 and 1909, which has remained undescribed in the collection of the Hunterian Museum in Glasgow since this time.

The new species is named Tyrannoneustes lythrodectikos, where 'Tyrannoneustes' means 'tyrant-swimmer' and 'lythrodectikos' means 'blood-biting'. It is described from a partial mandible (lower jaw), part of the jugal and quadratojugal  (bones in the upper jaw) and a collection of vertebrae and rib fragments. 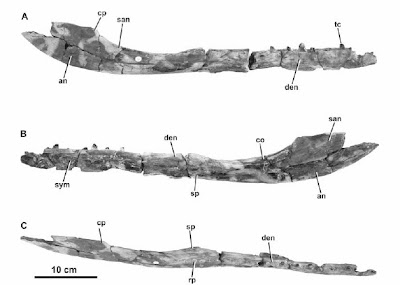 The bones of the mandible of Tyrannoneustes lythrodectikos are not completely fused, suggesting that it is a sub-adult. While it is not possible to estimate the size of the full animal from the material available, the 670 mm length of the partial mandible suggests that it was big, probably in excess of 3 m, larger than any other known Metriorhynchid Crocodylomorph from this early. 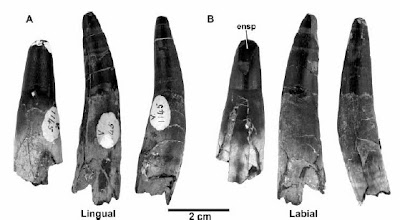 See also Predation of Freshwater Mussels in the Early Cretaceous of Spain, A Thalattosuchian Crocodiliforme from the Late Cretaceous of Argentina and Identifying Triassic footprints.