The Kuiper Belt is a region of the Solar System extending from the orbit of Neptune at about 30 AU (i.e. 30 times the distance between the Sun and the Earth) out to about 50 AU from the Sun it contains a very large number of bodies known as Kuiper Belt Objects, which are thought to be left over from the formation of the Solar System, elements of the original proto-planetary disk that were to widely scattered, and had to high an angular momentum, to assemble into planets under their own gravity. Some of these objects are large enough to be considered dwarf planets, notably Pluto (formerly considered to be a planet), Makemake and Haumea.

In a paper published on the online arXiv Database at Cornell University Library on 6 September 2013,  and in the Monthly Notices of the Royal Astronomical Society on 3 December 2013, Pedro Lancerda and Andrew McNeill of the Astrophysics Research Centre at Queen's University Belfast and Nuno Peixinho of the Center for Geophysics and Geophysical and Astronomical Observatory of the University of Coimbra, describe attempts to model the shape of one particular Kuiper Belt Object 2003 SQ317.

2003 SQ317 was discovered in September 2003 (the designation 2003 SQ371 indicates that it was the 7941st object discovered in the second half of September 2003). It has an eccentric 279 year orbit inclined to the plane of the Solar System, with an average distance of 42.7 AU from the Sun. It is considered to be a Haumea Family Object, a body with a similar orbital path and albedo to the dwarf planet Haumea, possibly formed by an ancient collision involving the proto-Haumea and another body, though modeling a scenario that could start in such a collision and end with the current pathways of these objects has proved elusive. In 2010 it was noted that 2003 SQ317 had a notably variable albedo, dimming and brightening by a factor of 14 over a period of 3.7 hours, suggesting that it might have a highly irregular shape. 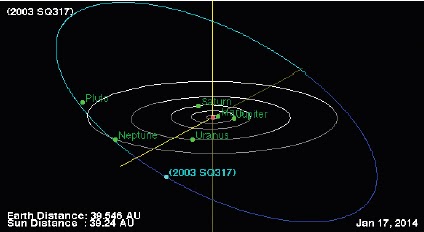 Based upon additional observations of 2003 SQ317 using the ESO New Technology Telescope located at the La Silla Observatory in Chile, Lancerda et al. attempted to build a model of the object that fit with the observed pattern of brightening and darkening.

They were able to come up with two, equally plausible models to account for this. Firstly 2003 SQ317 could be an flattened elongate body (Jacobi ellipsoid) spinning so that the body alternatively presents long and short sides to the Earth. Secondly the object could in fact be a pair of gravitationally bound bodies (a Roche binary pair), rotating one in front of the other, so that alternately one and two bodies can be seen. 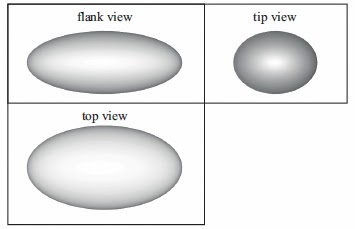 2003 SQ317 is too small and too distant for its shape to be resolved visually with any current telescope. It would in theory be possible to differentiate between the two models it the mass of the object were known (the binary pair would need to be considerably more dense than the Jacobi ellipsoid), though there is no easy way to do this at the current time. 2003 SQ317 is likely to be a rubble pile type object rather than one or two large rocks, which would allow it quite a range of possible densities, and make it hard to determine its density based upon its mineralogy (which can sometimes be assessed from albedo).