Interpreting an Insect trace fossil from the Late Carboniferous of Massachusetts.

In a paper published in the Proceedings of the National Academy of Sciences of the United States of America in April 2011, Richard Knecht of the Department of Geology at Tufts University, Michael Engel of the Division of Entomology (Paleoentomology) at the Natural History Museum and the Department of Ecology and Evolutionary Biology at the University of Kansas and Jacob Benner also of the Department of Geology at Tufts University described an Insect trace fossil from the Late Carboniferous Wamsutta Formation of Massachusetts, which they interpret as a landing trace left by a Mayfly (Ephemeropterida) in soft mud in a marginal freshwater habitat. 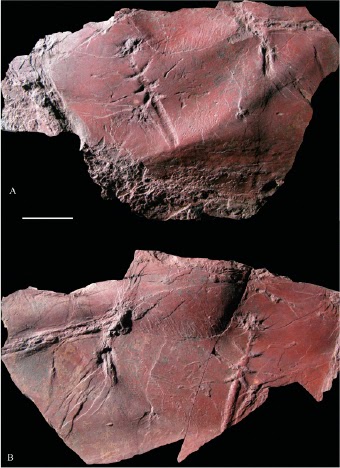 (A) Lower-facing side preserving trace fossil in concave epirelief. Two ripple mark crests are evident in this view running from left to right across the bedding plane. (B) Upper-facing side (in convex hyporelief). Possible incipient mud cracks are visible to the left of the trace fossil. Knecht et al. (2011).

In a paper published in the journal Evolution in January 2013, James Marden of the Department of Biology at Pennsylvania State University presents an alternative view of the Wamsutta Formation specimen, suggesting that it might be a trace left by a surface-skimming Stonefly (Plecoptera).

Knecht et al. had suggested that the insect was a Mayfly due to the absence of antennae and presence of traces left by two terminal filaments, furthermore ruling out a Stonefly as this group was not present in the Carboniferous. However Marden observes that a Carboniferous Stonefly was recorded from China in a paper published in August 2011 (after the publication of the Knecht et al. paper), implying that the group had arisen by this time, and that this group actually has two terminal filaments (unlike the Mayflies, which have three) and tend to hold their antennae aloft, where they do not make traces. Furthermore he shows a strong correlation between the morphology of the trace fossil and that of the underside of a modern Stonefly. 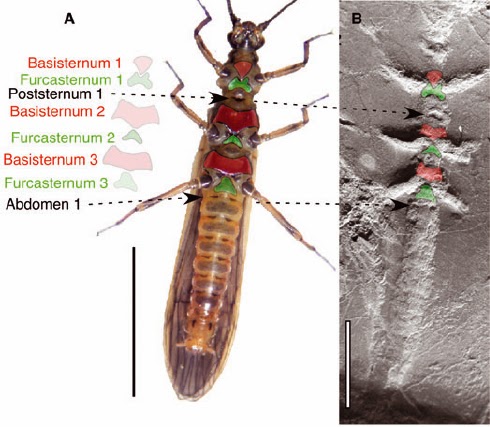 Ventral morphology of an extant neopteran insect (Plecoptera, Taeniopteryx) and the trace fossil (scale bars: A 5 mm; B 10 mm). Highlighted are sternal sclerites of Taeniopteryx, which, with minimal changes in size (primarily width) and relative position, match the fossil. Poststernum 1, basisternum 3, and furcasternum 3 are clearly defined in the fossil. Marden (2013).

Unlike Mayflies, Stoneflies are Neopteran Insects, meaning they can fold their wings along their bodies rather than keeping them stuck out at the sides at all times. Marden's examination of the Wamsutta Formation specimen shows marks alongside the body, which he interprets as traces made by the folded wings. 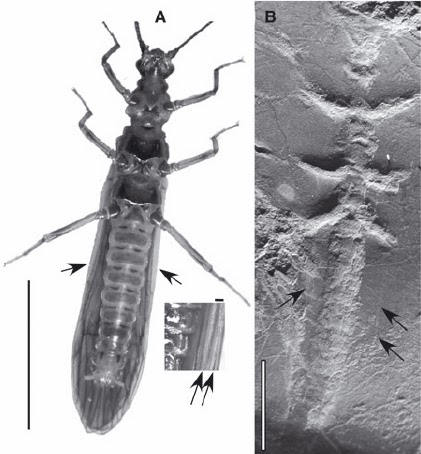 Evidence for marks made by the edges of folded neopteran wings. (A) Ventral view of a live Taeniopteryx stonefly. Arrows show the fore and hind wing leading edges, which sit flush against the ground when thewings are folded. Inset shows close-up of the paired wing edges. (B) Wing edge marks (at arrowheads) beside the abdomen of the trace fossil. Scale bars: A 5 mm (inset 0.1 mm); B 10 mm. Marden (2013).

The trace fossil also shows a number of faint marks outside the apparent reach of the leg-span of the tracemaker. Marden interprets these as wing-marks made by a Stonefly skimming across water by flapping its wings, prior to coming ashore on saturated sediment. Modern Stoneflies, which tend to be indifferent fliers, are known to move in this way, and similar marks were made by a Taeniopteryx beaching on wet kaolinite clay under experimental conditions.

Comparison of striations distal to the legs in the trace fossil with location of wingtips of a surface skimming stonefly. Left: Interpretation requiring lateral movement of the entire body to leave striations beyond the reach of the meso- and metathoracic legs while also moving forward to leave the linear marks parallel to the abdomen (i.e., two contradictory paths). Right: Dorsal view of a Taeniopteryx Stonefly skimming on the surface of water or wet sediment. Tips of the fore and hind wings contact the surface at locations consistent with the distal lateral marks in the trace fossil. Marden (2013).