A giant Platypus from the Miocene of northwestern Queensland.

Platypus (Ornithorhynchidae) are semi-aquatic Monotremes from eastern Australia and Tasmania. Like other Monotremes they are egg-layers, and lack several other adaptations seen in Marsupial and Placental Mammals. Monotremes are thought to have branched from the Mammal family tree around 220 million years ago, and are sometimes referred to as 'living fossils', though this is somewhat inaccurate, as nothing resembling a modern Platypus or Echidna is thought to have existed that long ago; rather the group have followed their own, separate, evolutionary path for a long time. The single species of modern Platypus, Ornithorhynchus anatinus, resembles a small Otter, but with a large, flat tail similar to that of a Beaver, and a leathery beak resembling that of a Duck. This beak is an electroreceptive organ, used to detect buried invertebrates, upon which the Platypus feeds. The male Platypus has venomous spurs on its hind legs.

In a paper published in the Journal of Vertebrate Paleontology on 5 November 2013, Rebecca Pian, Michael Archer and Suzanne Hand of the School of Biological, Earth and Environmental Sciences  at the University of New South Wales, describe a new species of fossil Platypus from the Two Trees Site in the Riversleigh World Heritage Area in northwestern Queensland, Australia.

The new species is placed in the genus Obdurodon, and given the specific name tharalkooschild; the Platypus being the child of the Water Rat Biggon and the Duck Tharalkoo in local Aboriginal mythology. Obdurodon tharalkooschild is described from a single molar. This is somewhat counterintuitive, as modern Platypus are toothless, however this is the third species described in the genus Obdurodon, and the teeth are considered to be quite distinctive. 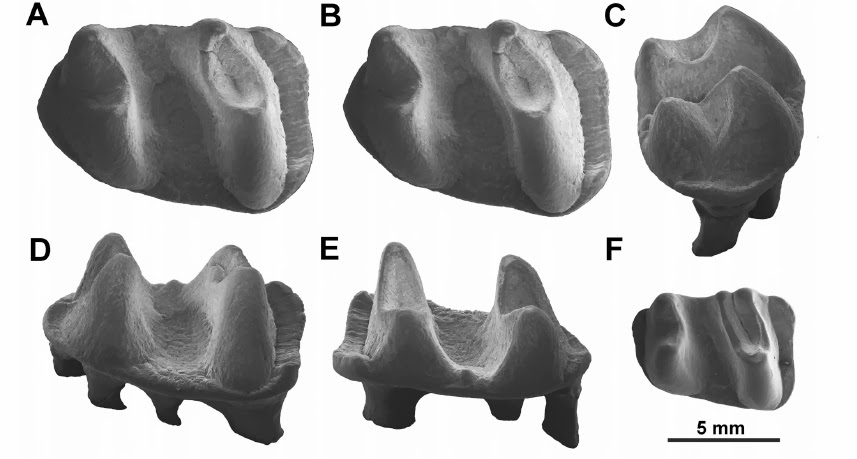 The dating of the Two Trees Site is somewhat controversial. It is generally thought to be middle Miocene in age, but some authors have argued that it is late Miocene or even Pliocene in age.

See also A 'South American' Marsupial from the early Eocene of Australia, What killed the Australian Thylacine and Walking with Giant Wombats.