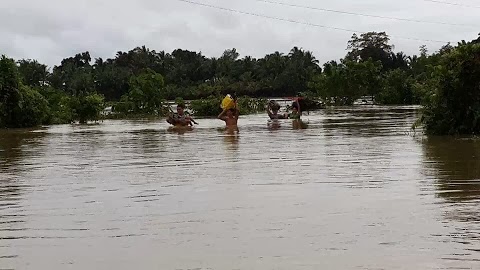 Flooding at San Francisco in Agusan del Sur Province on the northeast of Mindanao. Jela Castillo.


A man was swept away by flooding on the Aciga River at Santiago on the northwest of the island, and has not yet been found. Landslides also occurred at Kapatagan on the west of the island and El Salvador on the east. Flooding has been reported at Poblacion, Mambajao, Asuncion, Kapalong, New Corella, Depot, Ulip, Veruela and Rosario. Over 11 000 people have been evacuated from low lying areas.

Landslides are a common problem after severe weather events, as excess pore water pressure can overcome cohesion in soil and sediments, allowing them to flow like liquids. Approximately 90% of all landslides are caused by heavy rainfall.