Agamid Lizard remains from the late Early Pleistocene of Spain.

In a forthcoming paper in the journal Acta Palaeontologica Polonica, available online since 13 May 2013, a team of scientists led by Hugues-Alexandre Blain of the Institut Català de Paleoecologia Humana i Evolució Social describe a collection of Agamid Lizard remains from the late Early Pleistocene of the Sierra de Quibas in southeastern Spain.

Blain et al. do not attempt to classify these remains to species level, but are confident that they do belong to Agamid Lizards. They note that this extends the known presence of Agamid Lizards in Western Europe by about 500 000 years, from 1.8 million years ago to around 1.3 million years ago, though also that the area where the remains were found has the warmest climate in Western Europe, so the presence of Agamids later than elsewhere in the region is not greatly surprising. 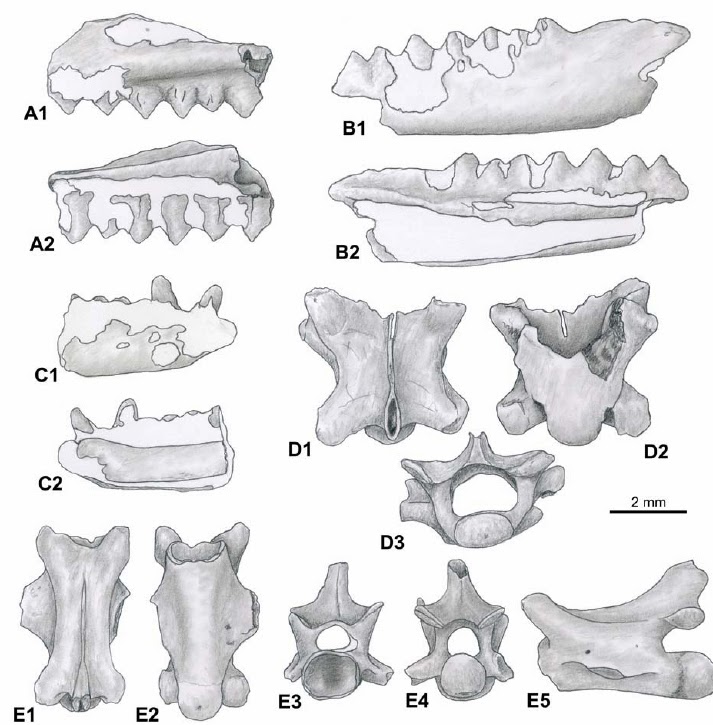 Blain et al. also note that a previous find, comprising a single dentary (jawbone) of an Agamid Lizard from Monte Tuttavista on Sardinia was previously considered to be of similar age, but that the dating of this specimen has been called into question, and that a single skeletal element should be treated with caution anyway, as this could possibly be the result of contamination. They contend that the dating of the Sierra de Quibas can be more confidently asserted, and that the larger number of specimens makes the possibility of contamination less likely.

See also Late Pleistocene Lizards from Fowlkes Cave, Texas, Four new species of American Legless Lizards from California, The biodiversity of Beaded Lizards, Giant fossil Sea Snakes from the early Eocene of Morocco and A fossil Snake from the Cretaceous of Brazil.