Bone pathology in a Triassic Phytosaur.

Palaeopathology is the study of disease and injuries in fossil remains. The way in which an organism responds to infection can tell biologists a lot about its ecology and lifestyle, and this is more true of palaeobiologists, who are working with fossil organisms that cannot be directly observed in the field.

In a paper published in the journal PLoS One on 15 January 2014, Florian Witzmann, Daniela Schwarz-Wings and Oliver Hampe of the Museum für Naturkunde - Leibniz-Institut für Evolutions- und Biodiversitätsforschung, Guido Fritsch of the Leibniz-Institut für Zoo- und Wildtierforschung and Patrick Asbach of the Institut für Radiologie at the Charité - Universitätsmedizin Berlin, describe a case of bone pathology in a Phytosaur from the Late Triassic of Halberstadt in central Germany.

Phytosaurs were a group of Archosaurs from the Late Triassic. They were similar in morphology (and presumably lifestyle) to modern Crocodiles, and for many years were thought to be among the earliest members of the Crocodylomorph group, but they are now thought to have branched of much earlier in the history of the Archosaurs, being less closely related to Crocodiles than Crocodiles are to Birds.

The Halberstadt specimens were originally excavated by Otto Jaekel in 1909–1912 and described by Friedrich von Huene in 1922, who assigned it to the species Angistorhinopsis ruetimeyeri. The species name is no longer considered valid, and Witzmann et al. do not reassign the material to another species due to its limited and deformed nature.

The material compares two pairs of fused vertebrae, the first being a pair of thoracic vertebrae, and the second the last presacral and first sacral vertebra. These were considered by von Huene to be the long-term consequences of trauma, possibly fracture, that the animal had experienced earlier in its life. However modern understanding of bone pathology and development makes this analysis somewhat unlikely. 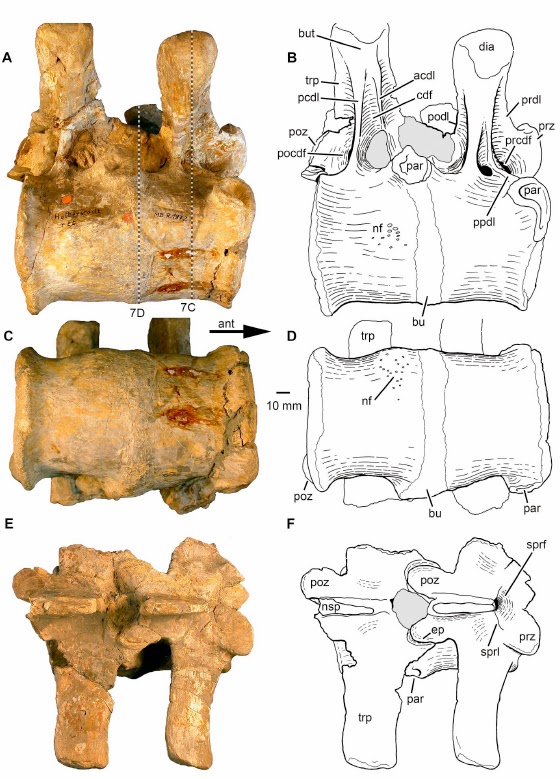 Instead of the damage being the result of an injury, Witzmann et al. suggest that it is likely to be the result of spondyloarthropathy, a form of chronic inflammation in which bone is both formed and eroded, and which is known to cause bone fusion of this type. Spondyloarthropathy can arise as a result of a number of rheumatic diseases, but which is not usually associated with injury or infection.

See also Tooth microwear in a Silesaurid Archosaur, Fighting in Pachycephalosaurs, Dental pathology in a Jurassic Theropod Dinosaur, Signs of malnutrition in a 1.5 million year old child's skull from the Olduvai Gorge and A predatory Archosaur from the Late Triassic of southern Poland.