Metamorphic Insects from the Late Carboniferous of Germany and France.

The Eumetabola, or Metamorphic Insects, are thought to have appeared sometime between the Middle Devonian and the end of the Carboniferous. They are distinguished by undergoing a complete metamorphosis in order to become an adult, with distinctive larval, pupal and adult stages to their life-cycle; as opposed to other Insects which typically have larvae similar to the adults and undergo a number of molts as they grow, each making them a little larger and more adult-like. This distinctive life cycle has arguably made the Eumetabola the most successful group of animals on the Earth, containing such groups as the Beetles (Coleoptera), True Flies (Diptera), Butterflies and Moths (Lepidoptera) and Wasps, Bees and Ants (Hymenoptera). Despite the modern success of the group, their origins are somewhat obscure, with fossils from the Palaeozoic being extremely rare.

In a paper published in the journal Nature on 16 October 2013, a team of scientists led by André Nel of the Muséum National d’Histoire Naturelle in Paris describe a series of early Eumetabolan Insects from the Late Carboniferous of France and Germany.

The first specimen described is named Avioxyela gallica, where 'Avioxyela' means 'Wood Wasp from Avion' and 'gallica' is an ancient name from France. It is thought to be a stem-group Hymenopteran, i.e. a member of a group from which the modern Hymenoptera (Wasps etc.) descended and which is ancestral to no other living Insects. Only a partial forewing is preserved, though this is typically considered to be enough for taxonomic assignment in palaeoentomology, as wing venation is highly distinctive in Insects. The specimen comes from Avion in the Pas-de-Calais Department of northern France, and is dated to the Moscovian (a stage of the Late Carboniferous/Pennsylvanian, 315.2-307.0 million years ago). 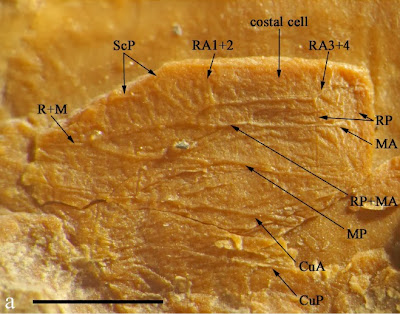 The forewing of Avioxyela gallica, a putative stem-group Hymenopteran from the Moscovian of Pas-de-Calais. Scale bar is 1 mm. Nel et al. (2013).

The second specimen described is named Stephanastus polinae, where 'Stephanastus' means 'citizen of the Stephanian' (Stephanian is a regional name for the last stage of the Carboniferous/Pennsylvanian, genrally called the Gzhelian) and 'polinae' honours Polina Kirejtshuk, daughter of one of the authors of the manuscript. Stephanastus polinae is considered to be a stem-group Coleopteran (Beetle). It comes from Commentry in the Allier Department of central France, an is dated to the Stephanian/Gzhelian (303.9-299.0 million years ago). 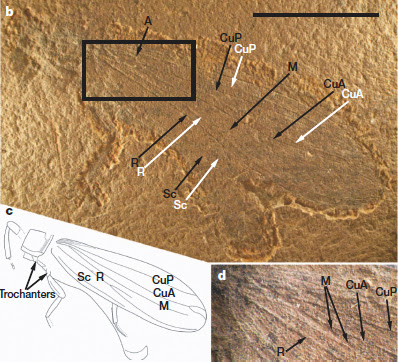 The third specimen described is named Metabolarva bella, where 'Metabolarva' is a combination of 'metabolism' and 'larva' and 'bella' means good, a reference to the state of preservation. Metabolarva bella is a larval Insect of uncertain affinities, but clearly of a metamorphic species, from the Moscovian of Piesberg in Lower Saxony, Germany.

The fourth specimen described is named Aviorrhyncha magnifica, where 'Aviorrhyncha' means 'Bug from Avalon' and 'magnifica' means wonderful, in reference to the state of preservation. Aviorrhyncha magnifica is  an isolated forewing thought to be from a Hemipteran (True Bug), and is from the Moscovian of Avion in Pas-de-Calais. 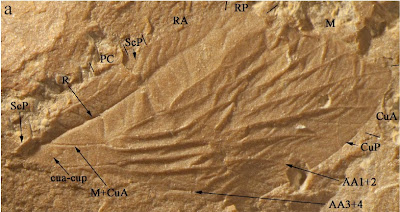 The forewing of Aviorrhyncha magnifica, a putative Hemipteran from the Moscovian of Pas-de-Calais. Nel et al. (2013).

The final specimen described is named Westphalopsocus pumilio, where 'Westphalopsocus' means 'Louse from the Wesphalian' (in reference to the Westphalian Stage of the Late Carboniferous/Pennsylvanian, 313-304 million years ago) and 'pumilio' means small. it is an isolated forewing thought to be from a Psocodean (Louse) from the Moscovian of Avion in Pas-de-Calais.

The forewing of Westphalopsocus pumilio, a putative Psocodean from the Moscovian of Pas-de-Calais. Nel et al. (2013).

Insect fossils from the Carboniferous are well documented from a number of locations, including many of great sizes. However these are overwhelmingly of non-metamorphic Insects such as Dragonflies or Cockroaches, so the metamorphic Insects described in this study greatly increase the range of known groups from the period. All of these specimens are very small, and therefore potentially easily overlooked, suggesting that more such fossils from this period may be found in other deposits from the period.

The Late Carboniferous was a time of climatic change, with cooling temperatures and increasing seasonality, factors that may have given the metamorphic Insects (which can occupy more  than one ecological niche during their life-cycle) an advantage over their non-metamorphic relatives. The earliest members of the group appear to have been tiny animals in a world of giant Insects, apparently unable to  compete well with non-metamorphic Insects during the more stable climate of the great Carboniferous forests.