A new species of Eagle Ray from the Northwest Pacific.

Eagle Rays (Myliobatidae) are large Batoid Fish (bilaterally symmetrical fish with cartilaginous skeletons descended from Sharks), that predominantly live as free swimming animals in the water column rather than on the sea bottom. They are strong swimmers, and some species have been observer to leap several meters from the water. The plankton-feeding Manta Rays and Devilfish are highly specialized Eagle Rays, though most members of the group feed on Molluscs and other shellfish, which they crush with strong, flat teeth, in a similar way to other Batoids.

In a paper published in the journal PLoS One on 31 December 2013, William White of the Wealth from Oceans Flagship of CSIRO Marine & Atmospheric Research and Keisuke Furumitsu and Atsuko Yamaguchi of the Faculty of Fisheries at Nagasaki University, describe a new species of Eagle Ray from the northwest Pacific.

The new species is placed in the genus Aetobatus and given the specific name narutobiei, meaning 'Naru Eagle Ray', a reference to the island of Naru, one of the Goto Islands, which are part of Nagasaki
Prefecture, where the new species was first encountered. Aetobatus narutobiei is a cryptic species; the populations referred to the new species were previously known, and referred to the wide ranging Aetobatus flagellum, which is recorded from across the Indian Ocean as well as the northwest Pacific. The new species is very hard to distinguish from the old visually, it is slightly larger and has slightly different colouring, but this is based upon a small sample size for both species. The species can only be reliably differentiated by genetic testing. 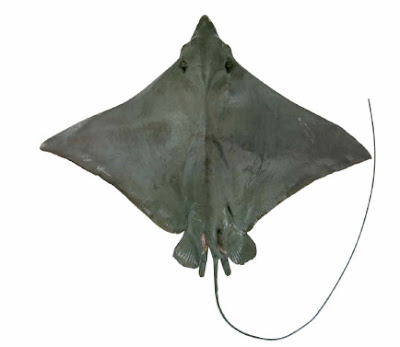 Eagle Rays assigned to the species Aetobatus flagellum have been subjected to a predator control program since 2001, due their impact on commercial shellfish stocks; this is despite the face that Aetobatus flagellum, like many Shark and Ray species, is listed as Endangered on the IUCN’s Red List of Threatened Animals. White et al. suggest that this policy needs to be reviewed as a matter of priority as it appears that these Rays are part of a smaller overall population.

See also A Hybodont Shark from the Middle Permian of Northern Arizona, Fossil Tapeworm eggs from the Permian, Satellite tracking Manta Rays off the coast of Mexico and New species of Catshark from the Galapaagos.