A new species of Rhinoceros from the Late Miocene of northeastern Thailand.

Rhinoceroses are iconic members of the modern Mammalian megafauna, distinguished by their large bulk, thick hides and horns. There are five modern species of Rhinoceros from Africa and Asia, three of which are considered to be Critically Endangered under the terms of the International Union for the Conservation of Nature's Red List of Endangered Species, with the two remaining being considered Vulnerable and Near Threatened. The earliest Rhinoceroses appear in the fossil record in the Early Eocene in North America. These animals were more Horse-like than Rhinoceros-like in appearance, and the smallest were no bigger than a Dog.

In a paper published in the Journal of Vertebrate Paleontology in July 2013, Tao Deng of the Key Laboratory of Vertebrate Evolution and Human Origin at the Institute of Vertebrate Paleontology and Paleoanthropology at the Chinese Academy of Sciences and the Department of Geology at Northwest University, and Rattanaphorn Hanta and Pratueng Jintasakul of the Northeastern Research Institute of Petrified Wood and Mineral Resources at Nakhon Ratchasima Rajabhat University, describe a new species of Rhinoceros from the Late Miocene Tha Chang Sand Pits in Nakhon Ratchasima Province, northwestern Thailand.

The new species is placed in the genus Aceratherium and given the specific name porpani, in honour of Porpan Vachajitpan, who donated the specimens from which the species is described to the Northeastern Research Institute of PetrifiedWood and Mineral Resources. Aceratherium porpani is described from a largely complete skull and separate nearly complete mandible. 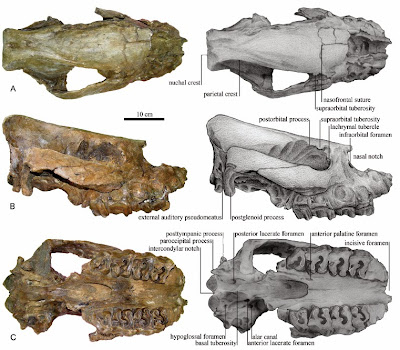 Skull of Aceratherium porpani .Photographs to the left and interpretive drawings to the right. (A) dorsal view; (B) lateral view; (C) ventral view. Deng et al. (2013). 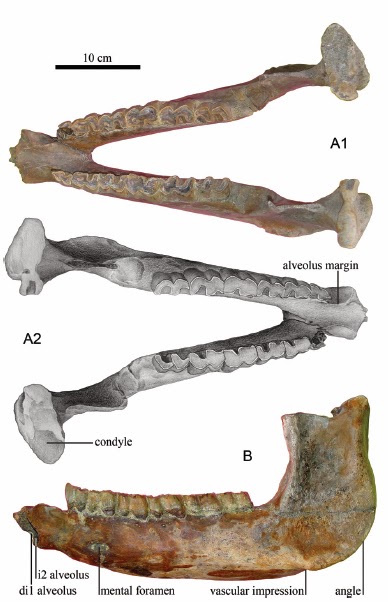 
See also Three new species of Tapir from the Early Eocene of Pakistan, What a 4.6 million-year-old Three Toed Horse can tell us about the climate of Mid Pliocene Tibet, The Western Black Rhino and Vietnamese Rhino declared extinct, November 2011 and A Woolly Rhino from the Pliocene of Tibet.