A new species of Skink from southern New Caledonia.

Skinks are smallish lizards with elongate bodies and reduced legs and necks. They are an ancient and successful group, found throughout the tropical, subtropical and warm temperate regions of the world, though individual species (of which there are over 12 000) may be threatened. Skinks can either lay eggs or bear live young (depending on species) and can be divided into tree-dwelling and ground-dwelling species, though this is an ecological rather than a taxonomic distinction; ground-dwelling species tend to have much more reduced limbs than tree-dwelling species, often being quite snake-like. Most skinks are insectivorous, but some will eat vegetable matter, or small rodents.

In a paper published in the journal Zootaxa on 8 August 2013, a team of scientists led by Ross Sadler of the Section of Herpetology at the Australian Museum in Sydney describe a new species of Skink from the southern Highlands of New Caledonia.

The new species is placed in the genus Caledoniscincus, which is native to New Caledonia and already contains 13 species, and given the specific name notialis, meaning 'southern'. Caledoniscincus notialis is a cryptic species (one that cannot be distinguished on morphological traits alone, but which has been shown to be distinct genetically) discovered as a result of a genetic study into the systematics of the genus. It closely resembles the widespread Caledoniscincus atropunctatus, and the populations referred to the new species were formerly classified as belonging to this species. The adult males, on close inspection, have pale marking on their dorsal scales not seen in Caledoniscincus atropunctatus, but the juveniles and females could only be differentiated by genetic analysis. 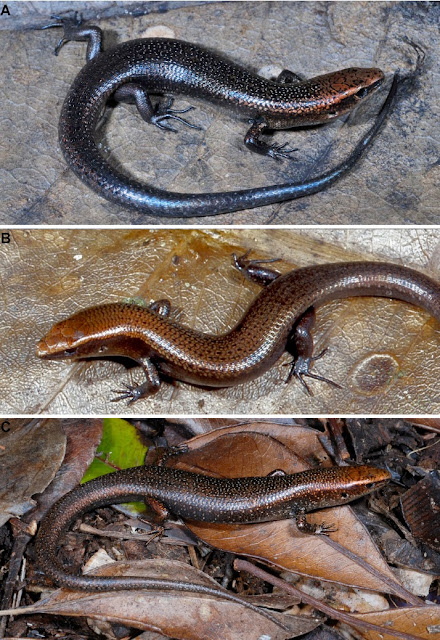 Caledoniscincus notialis is only known from scattered locations on the Goro Plateau and Grand Terre in far southern New Caledonia. It lives in humid forests and tall maquis (shrubland) on ultramafic soils (soils derived from low silica volcanic rocks, which tend to be low in calcium and phosphorus but high in metal content). Due to its limited range and subsequent low population, Sadler et al. recommend that Caledoniscincus notialis be classified as Vulnerable on the ICUN's Red List of Threatened Species. 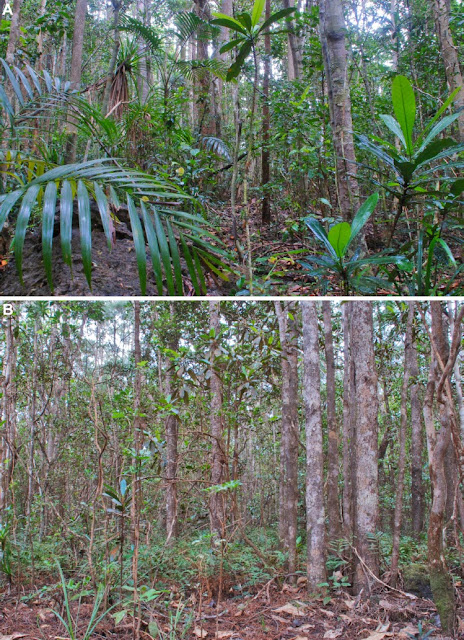 Humid forest (a) and maquis preforest (b) on ultramafic surfaces of the Goro Plateau, typical habitat for Caledoniscincus notialis. Sadler et al. (2013).