The lunar regolith provides an archive of data that can potentially be used to date the chronology of ancient impact events on the Moon. The ApolloMoonlander missions of the 1970s returned numerous samples of impact melt breccias (rocks made up of heat-fused pieces of older rocks) which can potentially be used to date the timings of the formations of the ancient impact basins which cover the surface of the Moon. However recent observations by NASA’s Lunar Reconnaissance Orbiter Camera suggest that even quite small impacts, creating craters as little as 100 m across, can result in some melting, suggesting that the impact chronology recorded in lunar rocks is likely to be extremely complicated.

The impact melt breccias recovered by the Apollo Moonlander missions were dated using 40Argon/39Argon dating techniques, which rely on determining the ratio of radioactive Argon⁴⁰ to non-radioactive Argon³⁹ within minerals from igneous or metamorphic rock to determine how long ago the mineral cooled sufficiently to crystaliz. If the ratio of Argon⁴⁰ to Argon³⁹ is constant in the environment, then this ratio will be preserved in a mineral at the time of crystallization; no further Argon³⁹ will enter the mineral from this point, but Argon⁴⁰ is produced by the decay of radioactive Potassium⁴⁰, and increases in the mineral at a steady rate, providing a clock which can be used to date the mineral.

However even the most advanced methods available at the time, such as infrared laser techniques (which focus an infra-red laser on a small sample of rock in order to vaporize some of the rock for spectrographic analysis), were prone to causing collateral heating (heating of the rock outside the area being focussed on), which made it hard to quantify how much of the outgassed sample analysed actually came from the area of the rock under investigation. Even at their very best these methods could not be focussed on areas of rock smaller than a few hundred micrometres across.

The first sample, 77115,121 (that is to say the 121st section cut from sample 77115) has a fine grained crystalline matrix consisting largely of plagioclase and pyroxenewith scattered olivine and ilmenite grains and xenoclasts of anorthosite, norite and dunite. 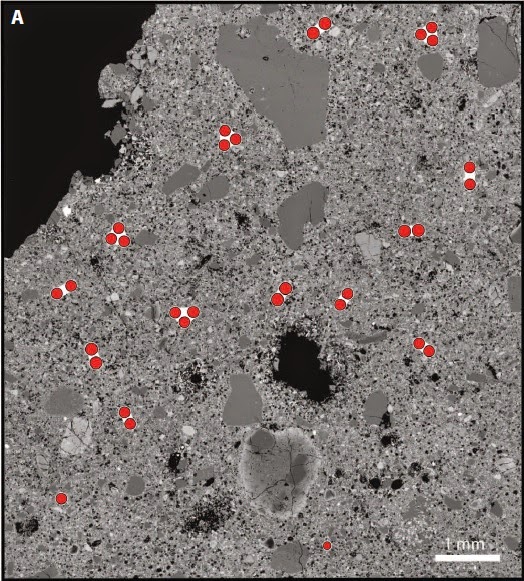 Backscattered electron mosaic of 77115,121 with the locations and dimensions of UVLAMP melt analyses shown as red circles. Mercer et al. (2015).

The second sample, 73217,83,  is more complex, showing several distinct zones with different mineralogy. The first zone is a medium-grained noriticanorthosite assemblage with plagioclaseand orthopyroxenegrains; this is split into two subsections, (1a), which has orthopyroxene gains up to 750 μm across and plagioclase grains in excess of a millimetre, and (1b) where all the grains are much smaller. The second zone, (2) gabbronoritic melt breccia with a potassic, glassy matrix and large quartz crystals, and the third zone, (3), is a very fine-grained crystalline,noritic melt breccia with abundant plagioclase and low-Ca pyroxene but few larger inclusions. 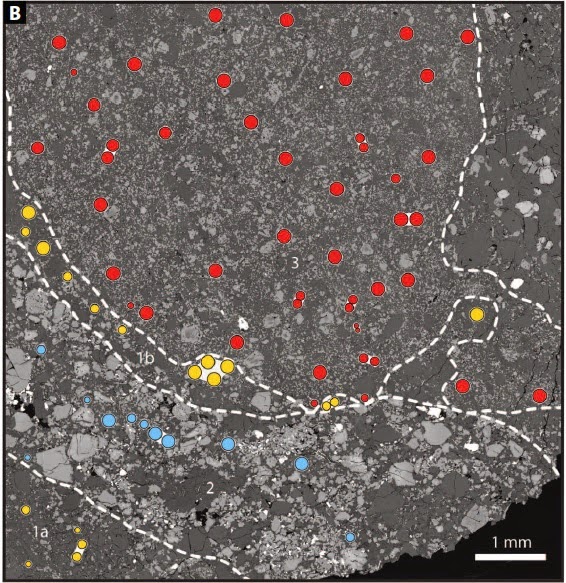 Backscattered electron mosaic of 73217,83 with the locations and dimensions of UVLAMP melt analyses in domains 1 (yellow), 2 (blue), and 3 (red). The coarse-grained region in the upper right is a gabbroic granulite. Mercer et al. (2015).

Mercer et al. took fifteen samples from the matrix of 77115,121, and a further eleven samples from larger crystals and clasts (fragments of older rock incorporated into the matrix). The matrix from this sample yielded an approximate age of 3.834 billion years, while the included clasts were considerably older, ranging from 3.892 to 4.23 billion years old.

Data from the Lunar Reconnaissance Orbiter Camera suggests that the area from which the Apollo 17 samples were recovered is likely to be dominated by ejecta from the formation of the Imbrium Basin, or (less likely) ejecta from the formation of the Serenitatis Basin. Estimates for the ages of these two events vary, but most of the estimates of the age of the Imbrium formation event cluster around 3.8 billion years ago, which coincides with the age of sample 77115,121 and with zone (1) of sample 73217,83, while all estimates suggest the Serentis Basin formation event was considerably earlier, ruling it out as a source of the melts, though leaving open the possibility it may have contributed some of the clasts incorporated in the samples. 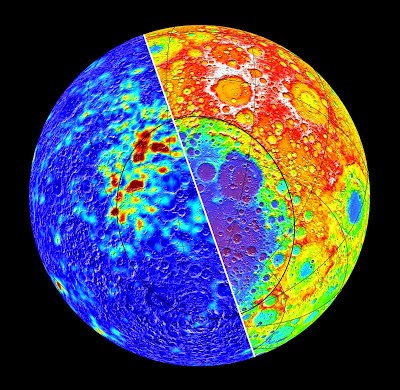 How the Moon got its strange magnetic field. The Moon has a much weaker magnetic field than the Earth, but much stronger than can easily accounted for, and not arranged in a bipolar bar-magnet style like that of the Earth, but made up of a patchwork of magnetic fields, with different orientations on different parts of the surface. This patchwork is seem on Earth too, where it is useful for dating and placing rocks. When liquid magma cools to form rocks, magnetic particles... 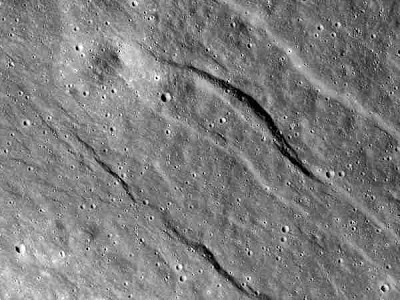 Recent tectonic activity on the moon?             The moon is thought to have formed about 4.5 billion years ago, thrown off from the Earth by a collision with another early planetesimal. After this collision it cooled rapidly, with the last of the flood basalts that cover much of the surface of the moon erupting between 3 and 3.5 billion years ago (the most recent major flood...
Follow Sciency Thoughts on Facebook.