The role of gold mining in deforestation in tropical South America.

The rate of deforestation in South America has risen sharply since the 1990s, driven largely by economic growth in nations such as China, particularly the greater market for meat this has created, which has led to forests being felled both directly to create new pasture and to grow cattle-feed crops such as Soybeans. An increased disposable income in countries such as China and India has also led to a rising demand for gold for personal use (i.e. jewellery etc.), which combined with uncertainty on the global financial markets since 2007/8 has led to a sharp rise in the price of gold, from US$250 an ounce in 2000 to US$1300 an ounce in 2013. This has in turn created a global boom in the gold mining industry, with both large and small scale miners expanding their activities in many areas, and in particular mining activities increasing sharply in many areas where this was not previously considered economically viable, such as low grade deposits in tropical rainforests.

While the amount of land cleared for mining and associated activities (roads, settlements etc.) is never likely to be as extensive as that caused by agriculture or urban expansion, the environmental effects of mining can be particularly severe, resulting in not just the loss of canopy trees but also the removal of soil and bedrock, and the widespread use of persistent pollutants such as mercury, arsenic and cyanide, all of which can enter aquatic ecosystems and cause damage over a wide area.

In a paper published in the journal Environmental Research Letters on 13 January 2015, Nora Alvarez-Berríos of the Department of Environmental Sciences at the University of Puerto Rico-Río Piedras and Mitchell Aide of the Department of Biology, University of Puerto Rico-Río Piedras describe the results of a study intended to detect rates of deforestation directly attributable to gold mining in South American moist forests below 1000 m, between 2000 and 2013.

Many areas within this region have soils rich in alluvial gold (gold that has been eroded from rocks elsewhere, in this case generally the High Andes or Guyanan Shield, and deposited by the action of rivers), which can be accessed by extracting washing and chemically treating the soil. While this process is highly destructive, it has significant economic impacts, contributing 6% of the total GDP of Peru in 2000-2010, creating 140 000 jobs in the formal sector (and an unknown number in the informal sector) in Colombia, and employing around 200 000 people in Brazil and 60 000 people in Surinam (which is 12% of the total population).

Alvarez-Berríos and Aide used data from government records, records of mining companies, articles in peer-reviewed journals and news reports, as well as imagery from Google Earth, Digital Globe and Landsat to determine the sites of mining activities in 373 municipalities in Colombia, Peru, Suriname, Guyana, French Guiana, Brazil, Venezuela, and Ecuador. In order to avoid overcomplicating the data, municipalities not known to produce gold were excluded from the study, and the legal status of mining sites was not taken into account. Once the sites of interest were established, vegetation index data from the MODIS satellites was obtained for the period 2000-2013, in order to determine rates of deforestation and reforestation around these sites. 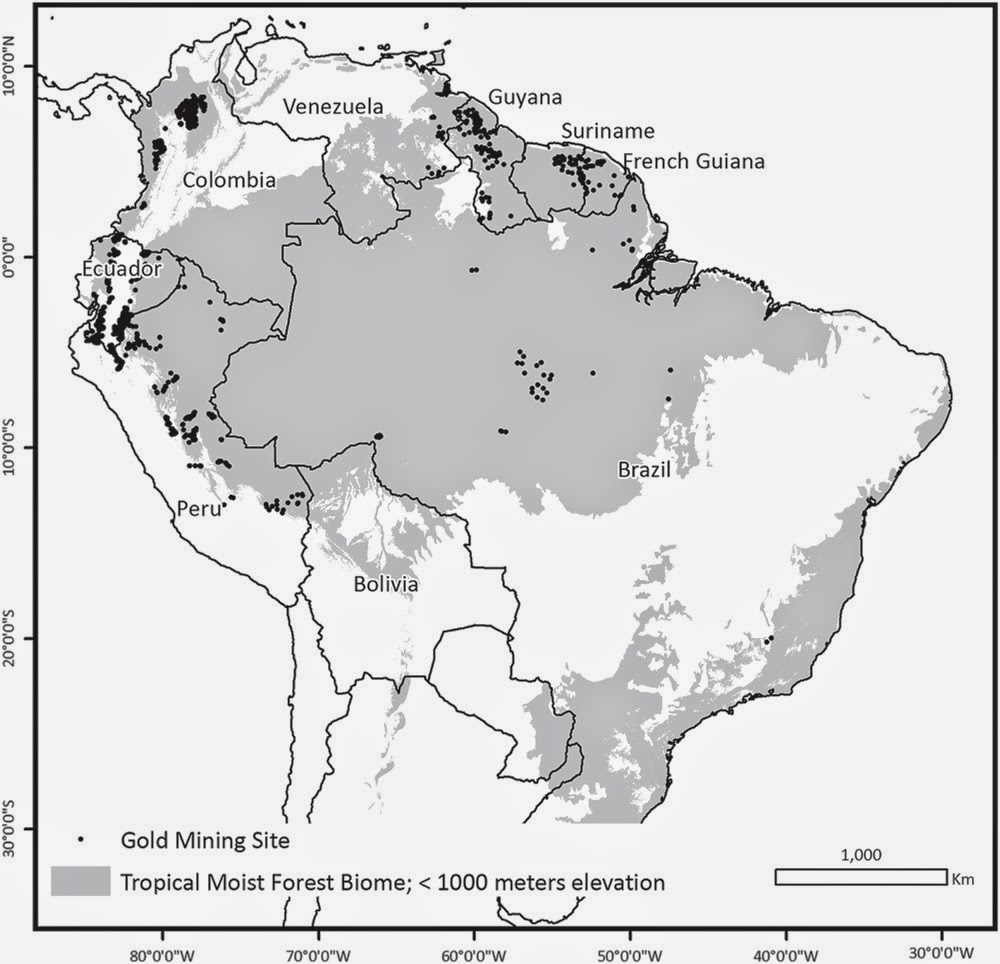 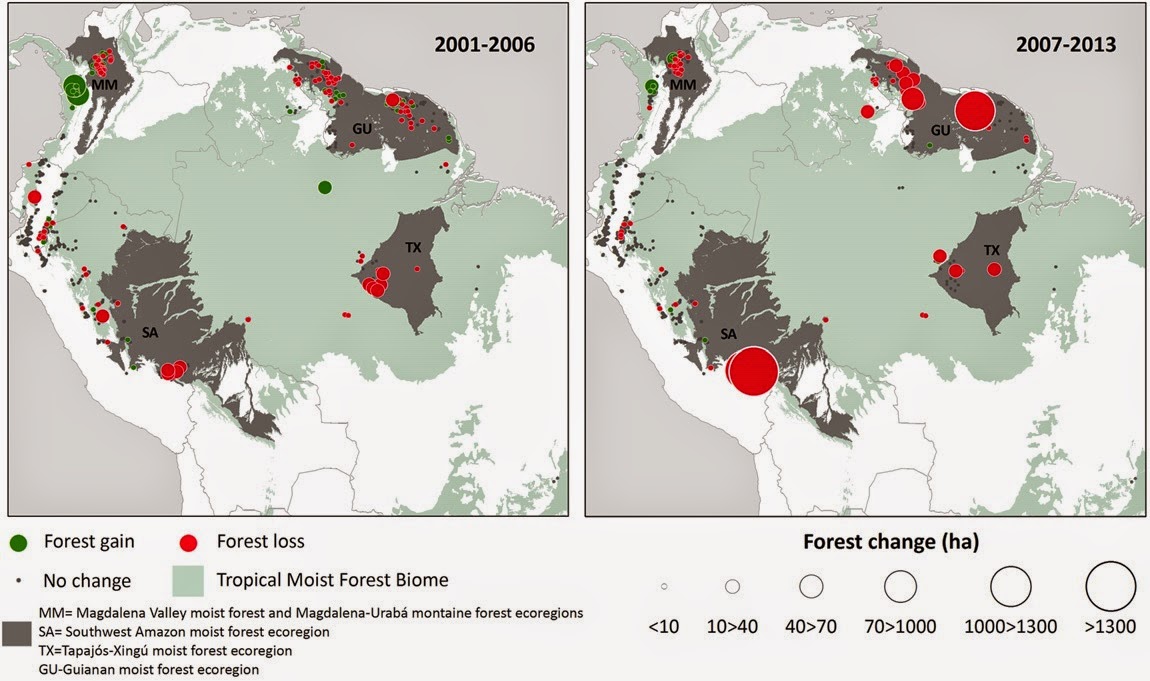 The largest losses were recorded in the Guianan moist forest ecoregion, which covers forests across Suriname, Guyana, French Guiana and Venezuela, an area of high mineral richness which produces large amounts of gold, diamonds, iron and bauxite, and where mining is already considered to be a major cause of deforestation (for example 68% of deforestation in Guyana between 2000 and 2010 is attributed to mining). Alvarez-Berríos and Aide detected ∼684 km2 of forest loss associated with gold mining in this region over the study period, 41% of the entire loss detected. The majority of this deforestation occurred in just two municipalities in Surinam, Brokopondo and Sipaliwini. Gold mining across the Guianan moist forest ecoregion increased sharply between 1990 and 2004, following liberalization of the international gold market and an influx of miners from Brazil, where the enforcement of land use and tribal land laws had been tightened. Much of this deforestation was attributed to small and medium scale mining operations, though some of it was attributed to (in theory better regulated) large operations.

The second highest level of deforestation occurred in the Peruvian Southwest Amazon, where ∼473 km2 of forest loss occurred (28% of the total), predominantly in the municipalities of Inambari, Madre de Dios, and Huepetuhe in the Department of Madre de Dios. The rate of deforestation sharply increased between 1999-2006, when an average of 21.66 km2 was lost each year, and 2007-2013, when an average of 61.56 km2 was lost each year (an almost threefold increase). In the period 2001-2006 agricultural expansion was considered to be the major cause of deforestation in Madre de Dios, but from 2007 onwards gold mining is considered to have overtaken agriculture as the primary cause of deforestation. This is directly linked to the rise in gold values, and subsequent increase in potential earnings in the industry, with an agricultural day labourer able to earn around US$15-18 per day, while a artisanal miner can earn US$10-230 per day.

The third highest level of deforestation occurred in the Tapajós–Xingú moist forest in Brazil, where ∼183 km2 of forest was lost around gold mining sites, 11% of the total loss detected in the study. This loss occurred at sites across the region, though much of it was found in the municipality of Itaituba. This area is considered to be the most important gold mining region in Brazil, with the majority of extraction undertaken by small scale artisanal miners. The number of miners in the region has risen from about 10 000 in 1990 to about 100 000 in 2010, with the largest influx occurring after 2008, largely due to the recolonization of areas previously considered exhausted, but which became profitable again as rising gold prices made it profitable to work marginal reserves previously considered uneconomicly viable.

The fourth highest level of forest loss occurred in the Magdalena Valley montane forest and Magdalena-Urabá moist forest ecoregions of Colombia, where ∼144 km2 of forest was lost, 9% of the total forest loss detected in the survey. This area has been considered an area of major forest loss over the period 2000-2010, due to oil exploration, cattle ranching, small-scale agriculture, and gold mining. Gold has been an important economic activity in the region since 1990, but as in other regions has undergone a major expansion in the last decade. The situation is made more complicated in Colombia due to the presence of guerrilla and paramilitary groups which derive income from mining, with around 86% of mining being illegal (i.e. unlicensed and unregulated by the government) and 20% of the proceeds of illegal mining going to groups such as the Revolutionary Armed Forces of Colombia (FARC) and National Liberation Army (ELN). Interestingly this area also saw the only major occurrence of reforestation produced in the study, in the municipalities of Nechí and Caucasia, which Alvarez-Berríos and Aide attribute to ongoing conflict in the region which leads to displacement of human populations, and abandonment of the activities in which they were involved. 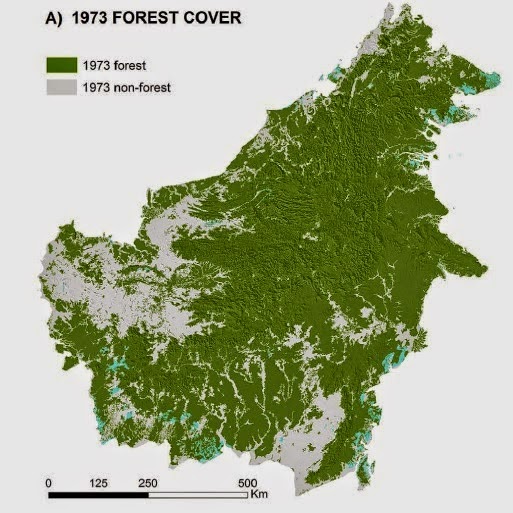 Mapping deforestation on Borneo.
Industrial scale timber extraction began on Borneo in the 1970s and during the period 1980 to 2000 more timber was harvested from Borneo than from Africa and the Amazon Basin combined. In addition much forest has been cleared to make way for monoculture plantations, for the palm oil, rubber and timber industries, as well as being burned in forest fires.  For this reason the island is often assumed to be a hopeless case...

Columbia gold mine collapse kills at least three.
Three people are known to have died and about thirty more are missing following a cave-in at an unlicensed gold mine near Santander de Quilichao in the...