Large carnivorous Theropod Dinosaurs are considered to have been the top predators in Late Cretaceous terrestrial ecosystems. These animals are well documented in many areas, but less well known in other, where it is unclear if they were absent or simply have not been preserved. In Central Asia and northern China large Theropod remains are well documented, but in southern China they are less well known, represented mostly by isolated and fragmentary teeth.

In a paper published in the journal Vertebra PalAsiatica on 21 January 2015, Mo Jin-You of the Natural History Museum of Guangxi and Xu Xing of the Institute of Vertebrate Paleontology and Paleoanthropology of the Chinese Academy of Sciences describe two exceptionally large isolated Theropod teeth from the redbeds of the Late Cretaceous Nanxiong Formation of Jiangxi Province in southeastern China.

The first tooth is 85.6 mm in length, with a crown height (exposed height) of 76 mm, a crown base length (front to back measurement taken at the base of the crown) of 40.4 mm and a crown base with (left to right measurement taken at the base of the crown) of 29 mm. The tooth is strongly recurved, and has chisel shaped denticles along its distal carina (the back edge of the tooth. These denticles are typical for a Tyrannosaurid, and Mo and Xu assign this tooth to that group, though they are unable to make any more specific diagnosis. The size of the tooth falls within the range of Tyrannosaurus rex, the largest Tyrannosaurid species, but this species is unknown from Asia. The largest currently known Late Cretaceous Chinese Tyrannosaurid is Zhuchengtyrannus, from Shadong Province, the largest two teeth of which measure 43 mm long by 27 mm wide and 38 mm long by 32 mm wide at the base of the crown, comparable with the Nanxiong tooth, but are otherwise different in shape, lacking the strong curvature seen in this specimen, suggesting that this tooth belongs to a new and undescribed species. 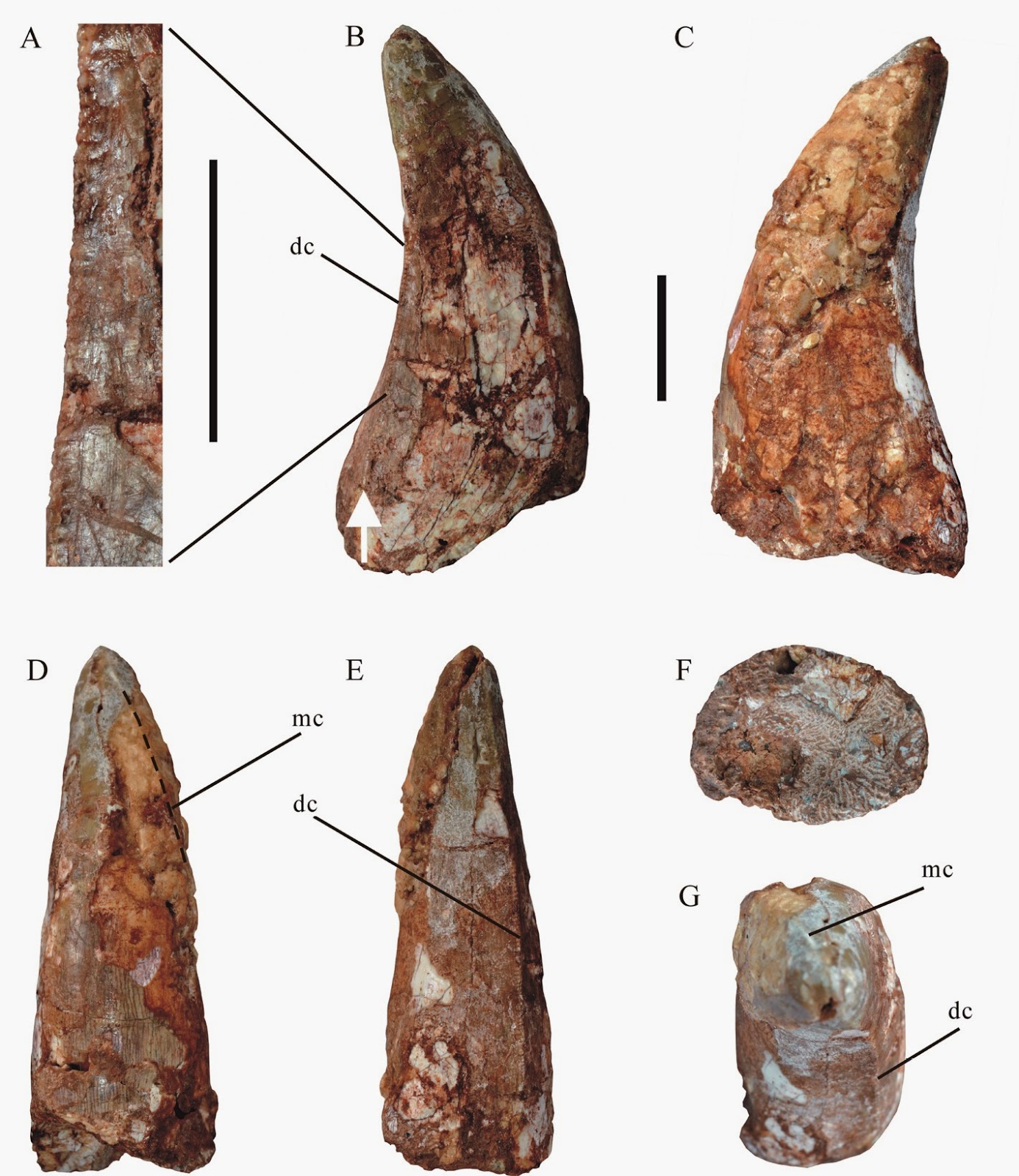 The second specimen is 103 mm in length with a crown height of 91 mm, a crown base length of 45.2 mm and a crown base width of 21 mm. It is blade-like in profile and recurved. The tooth has distinctive serrations on both the mesial and distal carinae (front and back edges), though these carinae do not meet at the top of the tooth, and ripple-like irregular ridges on the mesial and distal surfaces (front and back surfaces), particularly towards the base of the crown, while the lingual and labial surfaces (inside and outside surfaces) are smooth.

This tooth shows no clear affinity with any known Theropod group. It is comparable in size to the largest Tyrannosaurs, Carcharodontosaurs and Spinosaurs, but differs in shape from any known member of these groups.

Ripple-like ridges are common on the teeth of Spinosaurs, including Asian specimens, but again these ridges tend to be concentrated on the lingual and labial surfaces of the teeth, and they tend to be arranged in very regular patterns, quite unlike the irregular arrangement seen on the Nanxiong tooth. The blade-like profile of the Nanxiong specimen is also unSpinosaurlike, with most Spinosaurs having roughly conical teeth. 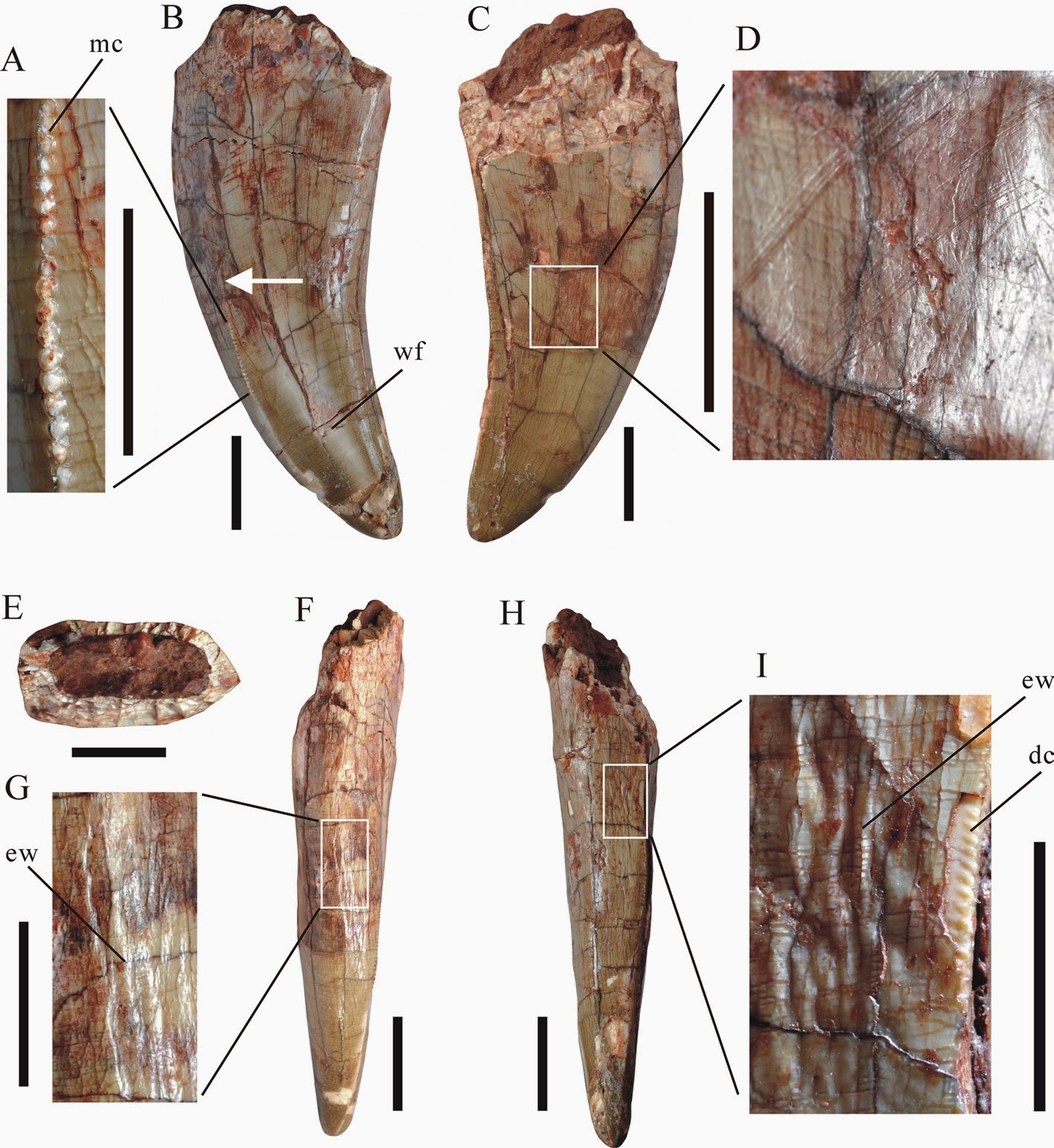 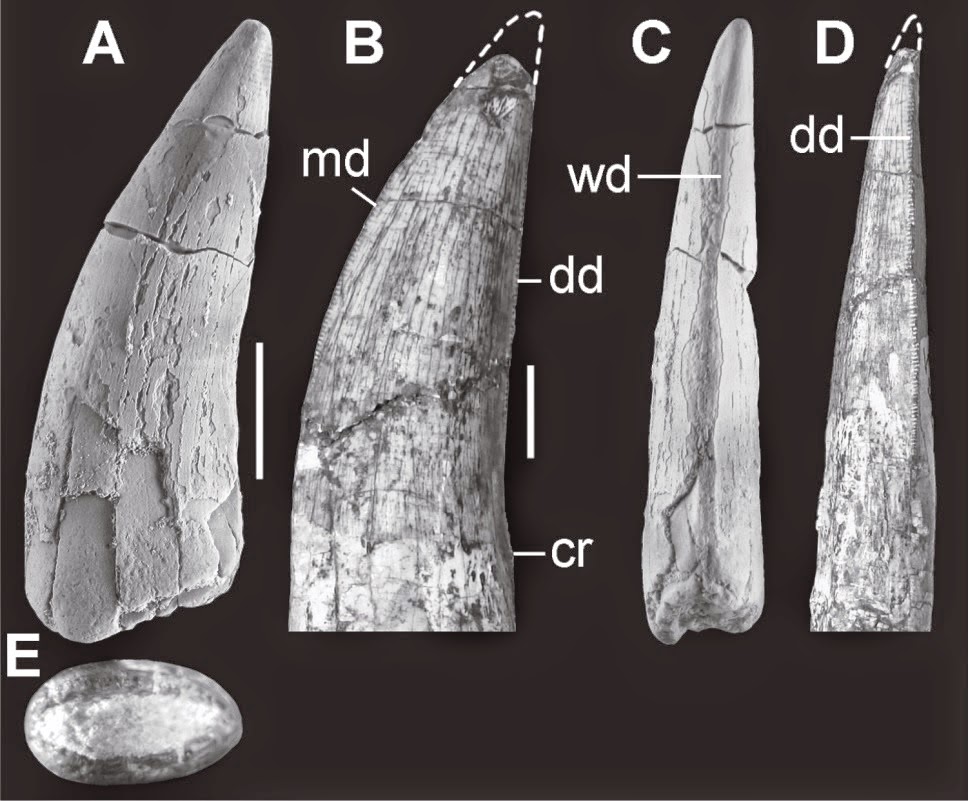 Theropod remains from the earliest Jurassic of Luxembourg.
Terrestrial faunas of the Triassic comprised a wide variety of large Vertebrates, including Synapsids and both Dinosaurian and non-Dinosaurian Archosaurs. At the end of the Triassic a major extinction event wiped out or greatly reduced most of these groups, with the...

A Megatheropod tooth from the Early Cretaceous of Guanxi Province, China.
In recent years China has become a focus for studies...

Dinosaur remains from northwestern Saudi Arabia.
Dinosaurs are the most distinctive ﻿element of Mesozoic Vertebrate faunas, arising in the Triassic, and coming...