The Ginger Family, Zingiberaceae, appears to have a biodiversity hotspot in the Indochina region (Cambodia, Laos and Vietnam), though this has been little studied, with the last comprehensive review published in 1908. Numerous new species have been described in the past decade nsuggesting that the group is in need of more detailed study in this area.

In a paper published in the journal Blumea on 10 October 2014, Jana Leong-Škorničková of The Herbarium of the Singapore Botanic Gardens, Otakar Šída of the Department of Botany at the National Museum in Prague, Somsanith Bouamanivong of the Biotechnology and Ecology Institute of the Ministry of Science and Technology of Laos and Keooudone Souvannakhoummane and Kithisak Phathavong of the Pha Tad Ke Botanical Garden describe three new species of Zingiberaceae from Laos, two of which are placed in the Turmeric genus Curcuma and one of which is placed in the Ginger genus Zingiber.

The first new Turmeric species is named Curcuma corniculata, meaning ‘having small horns’ in reference to the shape of the flowers. This is a herbaceous plant reaching a meter in height, producing 5-9 leaves up to 47 cm in length from a pseudostem made up of the sheaths of the leaf stems (petioles). Flowers are produced in bracts from the base of this stem, and are red and orange in colour. The flowers last only a single day, and are produced from the end of May till July, which is the start of the rainy season. The plants were found growing on a single limestone outcrop 866 m above sea-level in Louangphrabang Province.

The second new species of Turmeric is named Curcuma flammea, meaning ‘flaming’ in reference to the fiery red colour of the flowers. This is a herbaceous plant reaching 70 cm in height, producing 1-5 leaves up to 36 cm in length from a pseudostem that can reach 30 cm. Flowers are a fiery red and orange colour and last only a single day, being produced from the end of May till July, which is the start of the rainy season. The species is known only from a single location, on a limestone slope in a dense Diptocarp forest in Vientiane Province, Laos. 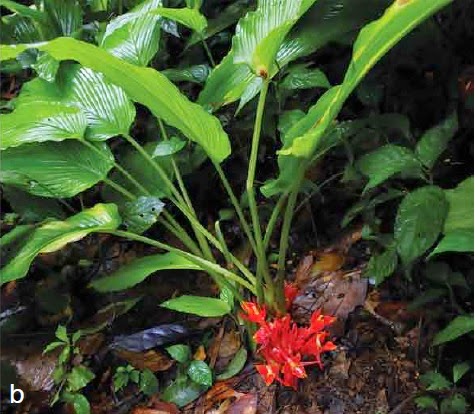 The new Ginger species is named Zingiber jiewhoei, in honour of Tan Jiew Hoe of the Singapore Gardening Society for his support on Ginger research at the Singapore Botanic Gardens and of taxonomy in Laos. This is a herbaceous plant producing arching leafy shoots up to 2.5 m in length. Flowers are 7-9 cm long, deep red in colour, and produced from the base of the plant, these are produced in the early rainy season, and open overnight, from about 3 pm to early the following morning. The plant was found growing at a single location, near a stream in a lowland deciduous forest in Vientiane Province, Laos. 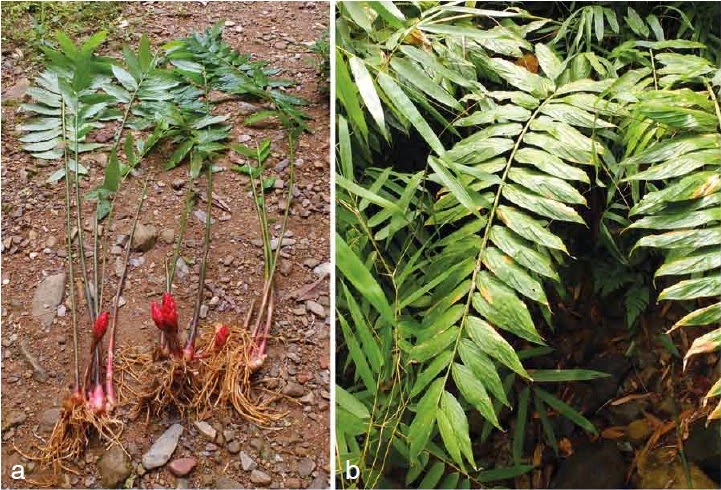 A new species of Turmeric from the Bù Gia Mập National Park in southern Vietnam.
Turmeric (Curcuma) plants are members of the Ginger Family (Zingiberaceae) native to India, southern China, Southeast Asia, Indonesia, Papua New Guinea and northern Australia. Several species are grown for use as a spice or dye, and the more colourful species are popular garden plants in tropical areas, though they need constant warm temperatures and high rainfall to thrive. The plants can reproduce both sexually by flowering and asexually by means...