A compact planetary system around an ancient star.

The Kepler Space Telescope has discovered over 4000 candidate planets, around 40% of which are in systems with multiple planets. Many of the early multiple planet systems discovered contained one or more giant planets (planets of similar size to, or larger than, Jupiter), which tend to be easier to detect. More recent discoveries have found a wider range of planets, enabling comparisons to be drawn about the systems that host these planets. All of the giant planets have been found in systems with metal rich stars, indicating that they are relatively young and have formed late in the Universe’s history (all metal in the Universe is thought to have formed in old and dying stars, and as the universe has aged the amount of metal has steadily increased, so that younger stars contain more metal from the outset), but smaller planets have been found around a much wider range of stars, implying that such planets began to form much earlier in the Universe’s 13.8 billion year history.

In a paper published on the arXiv database at Cornell University Library on 26 January 2014 a team of scientists led by Tiago Campante of the School of Physics and Astronomy at the University of Birmingham and the StellarAstrophysics Centre at the Department of Physics and Astronomy at Aarhus University describe a system of planets around the ancient low metal star Kepler 444, which is estimated to be about 11.2 billion years old.

Kepler 444 was formerly designated as KOI 3158 (Kepler Object of Interest 3158, implying the 3158th star in the Kepler field found to have candidate planets), becoming Kepler 444 with the conformation of its planets (Kepler 444 implying the 444th system in the Kepler field with confirmed planets). It also has the catalogue designations HIP 94931, KIC 6278762 and LHS 3450. It is a K-type dwarf star, with about 75% of the mass of the Sun and an effective surface temperature of 5046 K (compared to 5778 K for our Sun).

It is also one of the closest stars in the Kepler study, at a distance of only 116.4 light years, and is part of the Arcturus Stream, a group of ancient stars with similar proper motions; these were formerly thought to have formed outside the Milky Way proper, in a now defunct satellite galaxy, though this is now considered unlikely, with the stars probably originating in the Thick Disk, an area ranging from one to five kiloparsecs of the galactic plane (85% of the galaxy’s stars originate within the Thin Disk, which lies within one kiloparsec of the galactic plane).

Campante et al. followed up the initial Kepler observations of the system with observations from the Keck I telescope and HIRES spectrograph on Mauna Kea, the Robo-AOlaser-adaptive-optics system, the Palomar Observatory 60-inch telescope and the NIRC2 instrument mounted on the Keck II 10-meter telescope.

These observations found a second, dimmer star at a distance of 1.8 arcseconds from Kepler 444 (an arcsecond is one sixtieth of an arcminute, which is one sixtieth of a degree, which is one three hundred and sixtieth of the sky envisioned as a sphere surrounding the Earth). This second star shows a common radial velocity with the primary star, suggesting that it is orbiting Kepler 444 roughly once every 430 years. Data from the HIRES spectograph further suggests that this second body is itself a pair of M-type Red Dwarf stars, the larger of which has an effective surface temperature of 3464 K, the smaller being cooler. 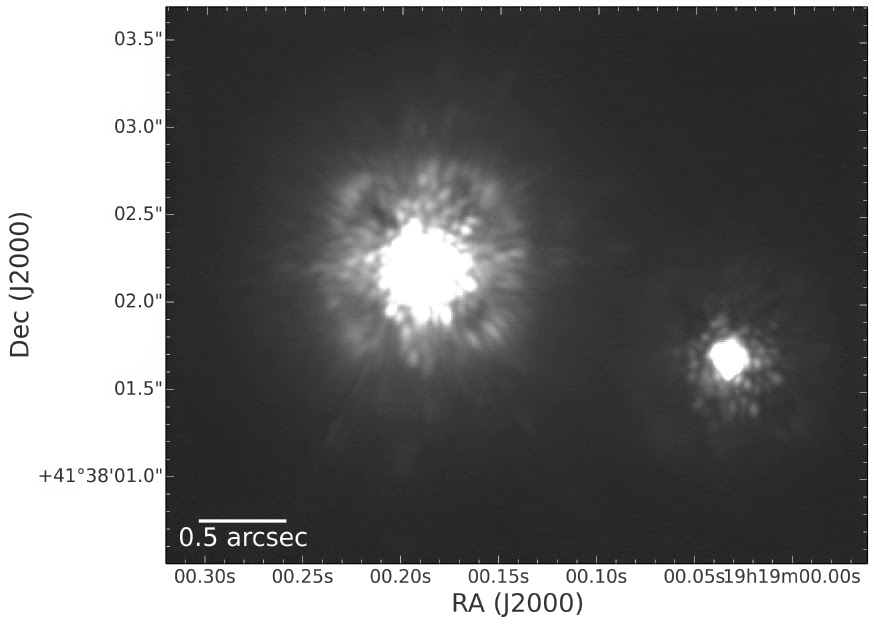 NIRC2 adaptive optics image of Kepler-444. The image was obtained using the K’filter (2:124mm) for a total of 378 s of integration time. Declination and right ascension coordinates (J2000.0) are given alongthe vertical and horizontal axes, respectively. Campante et al. (2015).

The Kepler 444 system had five planetary candidates, all of which were resolved to be true planets rather than background objects with a 99.9% certainty. The planets are all have short orbital periods, implying that they are all close to the star, within 0.06 AU (i.e. 6% of the distance at which the Earth orbits the Sun), and the orbital periods appear to be resonant; which is what would be expected from tightly packed planets.

Next Campante et al. examined the possibility that the planets might orbit one or both of the companions, rather than Kepler 444 itself. Since the data from the Kepler Space Telescope records the amount of dimming that occurs when a planet passes in front of a star, it is possible to calculate the radius of that planet if the brightness of the star is known. This suggests that the planets would have radii of 1.33, 1.64, 1.75, 1.80, and 2.45 times that of the Earth if they are orbiting the companion bodies. Since it would be virtually impossible for planets to retain gaseous envelopes or significant volumes of ice this close to a star, these bodies would have to be rocky in nature, and therefore have significant masses. Attempts to model such a system with bodies of such high masses close together suggested that such a system would be unstable and the planets would be lost within decades or centuries, ruling out this scenario.

Thus the first planet, Kepler 444b (when naming bodies in other star systems planets are given lower case letters and stars upper case letters), will have a radius 40.3% of the Earth’s (roughly comparable with Mercury), and orbit the Keppler 444A (the main star in the system) every 3.6 days, at a distance of 0.04178 AU (4.178% of the average distance between the Earth and the Sun). 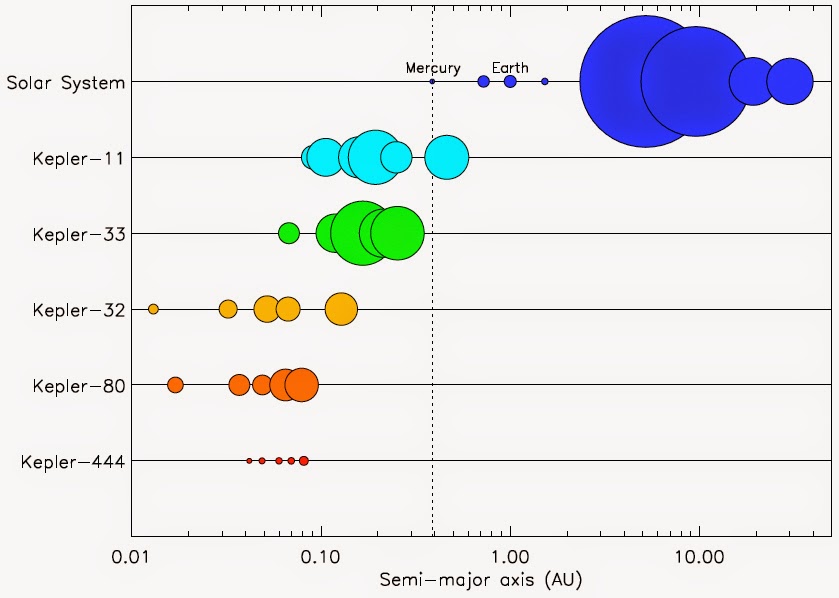 Semi-major axes of planets belonging to the highly-compact multiple-planet systems Kepler-444, Kepler-11, Kepler-32, Kepler-33, and Kepler-80. Semi major axes of planets in the Solar System are shownfor comparison. The vertical dotted line marks the semi-major axis of Mercury. Symbol size is proportionalto planetary radius. Note that all planets in the Kepler-444 system are interior to the orbit of the innermostplanet in the Kepler-11 system, the prototype of this class of highly-compact multiple-planet systems.Campante et al. (2015).

Kepler 444 is the oldest star yet found to host planets, the former holder of which title was Kepler 10, at an age of 10.4 billion years. It is considered to be a second generation star (i.e. made of matter that had previously been in only one other star since the origin of the universe), unlike the Sun and most other known planet-hosting stars, which are third generation stars. This means that at the time when the Solar System was forming, the planets of the Kepler 444 system were already older than the Earth is now. The existence of rocky planets this early in the history of the Universe suggests that life may also have originated very early, and that truly ancient ecosystems may exist somewhere in the Universe. 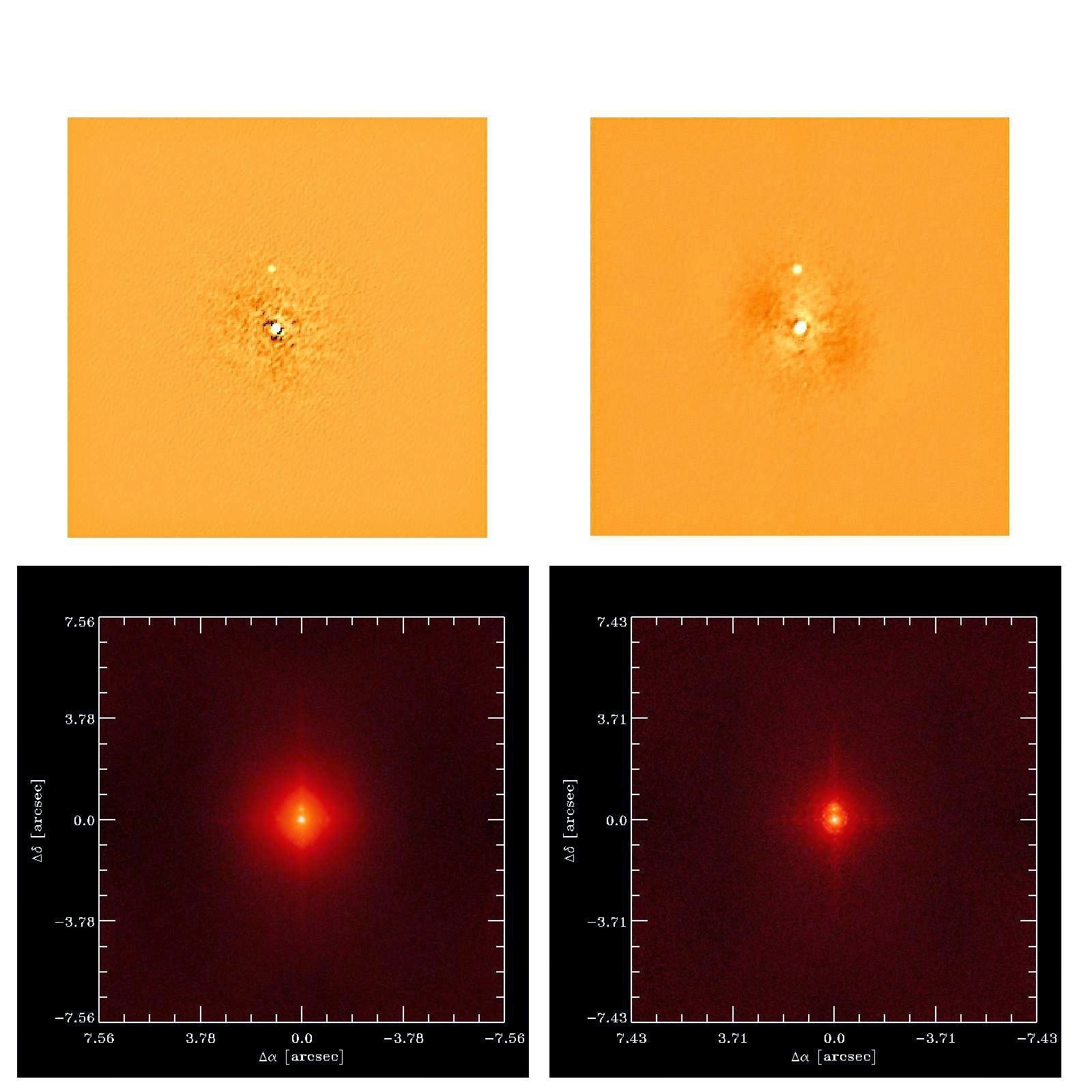 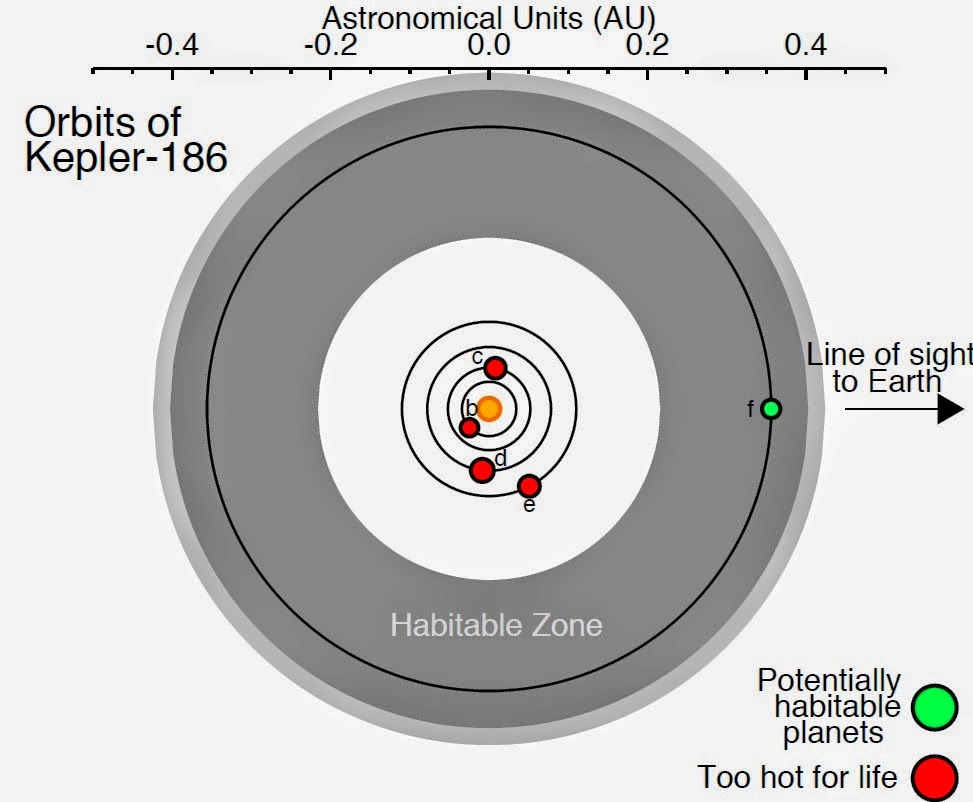 Kepler 186f: an Earth-sized planet in the habitable zone of a Red Dwarf star.
One of the key objectives in the search for planets orbiting other stars has been to locate planets in the habitable zones of such stars, i.e. planets on which liquid water could potentially exist. A number of.
Follow Sciency Thoughts on Facebook.