Understanding the preservation of Insects in the Crato Formation.

The Crato Formation outcrops on the northern flanks of the Chapada do Araripe, a plateaux on the border between Ceará, Pernambuco andPiauí States in northern Brazil. In is noted for its exceptionally well preserved fossils, which include Dinosaurs, Crocodiles, Fish, Pterosaurs, Crustaceans, Arachnids, Plants and most notably Insects, which are present in large numbers, often showing exceptional preservation. These Insects are of particular interest as they date from a time in the Early Cretaceous when Flowering Plants were rapidly diversifying, and relationships between Insect and Plant groups that would come to dominate the Earth’s terrestrial biology were being formed.

Despite the importance of these fossils, the preservation process that led to their formation is not well understood. The fossils occur only in the Nova Olinda Member at the base of the Crato Formation, a laminated limestone made up of alternating light and dark layers about 1 mm thick, interpreted as representing a seasonal cycle. Preservation of insects in limestone is exceptionally rare (most high quality Insect fossils are found in amber), which suggests that the method of preservation in the Crato Formation must have been exceptional. 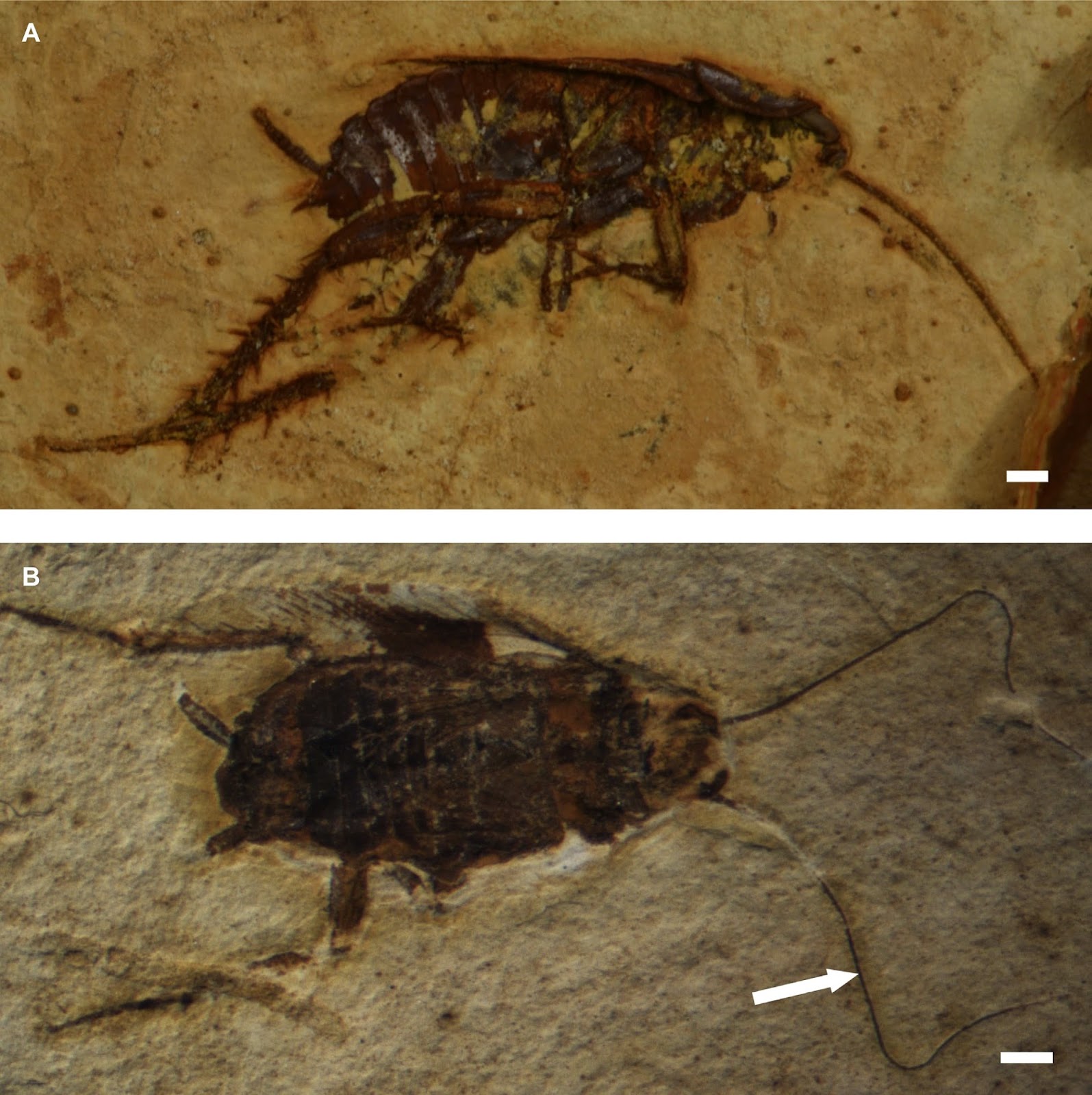 Exceptional preservation is a little hard to quantify in Insects; as a rule a fossil is considered to show exceptional preservation if it shows any preservation of non-mineralized tissue, however Insects are comprised entirely of such tissue, and while describing the fossilization of any Insect as exceptional might be accurate, this is not useful when comparing the relative preservation of different Insect fossils. Many specimens from the Crato show exceptional preservation of surface features, such as cuticular scales, setae (‘hairs’ – though not formed from the same material as Mammalian hair), muscle fibres and eye structures. This is often true of even fragmentary remains (which would otherwise not be considered exceptional), suggesting that these remains were fragmentary before reaching the site of preservation, possibly as a result of predation or similar damage. However other specimens are less well preserved, showing only the gross morphology of the Insect, not any fine detail. Unusually these less well preserved fossils appear to be the exception in the Crato (i.e. the better preserved fossils are more common), and seem to be limited to certain horizons. 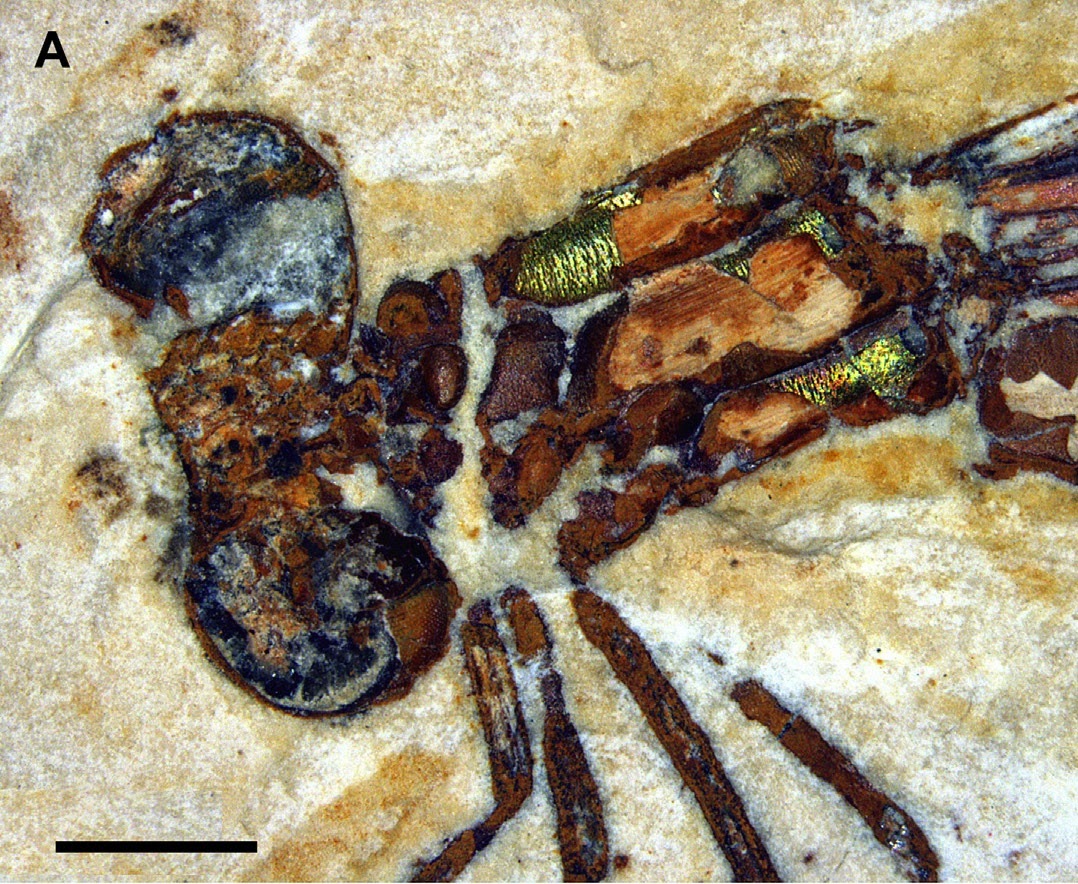 Damselfly Parahemiphlebia mickoleiti showing structural iridescence; this is achieved through fine structure of the cuticle rather than the presence of pigments, and therefore requires exceptional preservational detail to be retained. Scale bar is 1 mm. Barlinget al. (2014).

All of the Crato Formation Insects are replacement fossils; that is to say no original tissue has been preserved, everything seen is minerals that have replaced these tissues, albeit with remarkably high fidelity. On exposed limestone surfaces, which are buff in colour, the cuticletissue is preserved as friable orange or brown amorphous goethite (limonite). In unexposed limestones, which are blue-grey in colour, this tissue is preserved in a more delicate black mineral, probably a form of iron sulphide. The exposed fossils (and limestone matrix) have apparently turned brown as a result of recent oxidation, probably over no more than a few thousand years. Other tissues appear to be preserves as forms of apatite. Some fossils are surrounded by silica halos, which may indicate the presence of former biofilms. 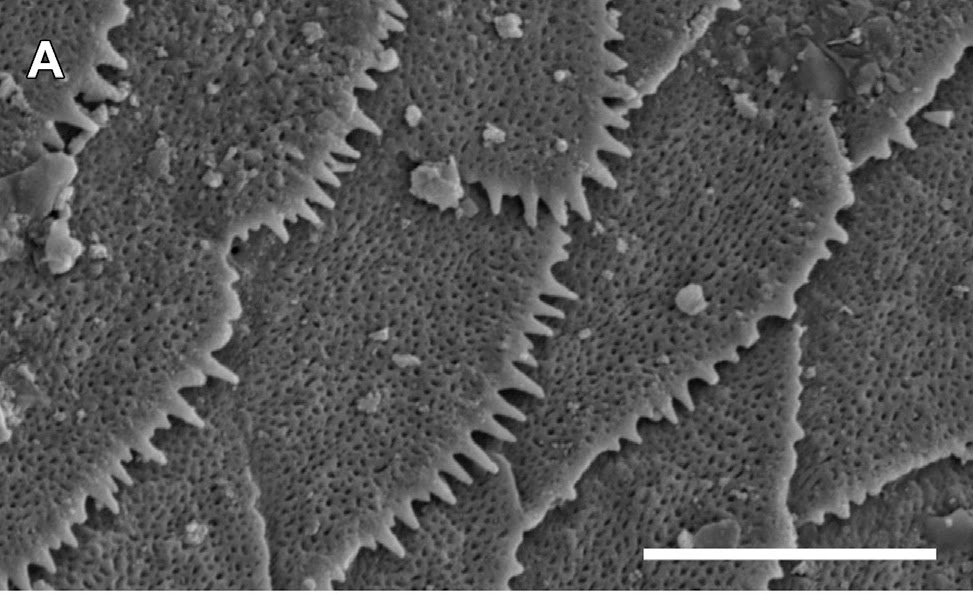 The preservation seen in the Crato fossils is even more remarkable when it is understood that many are preserved as oxidised iron minerals (essentially rust). Many of these specimens show preservation of fine structures of the cuticle and other tissues, with little loss of detail occurring during the mineral replacement process. Some specimens do show structures that may be mineralogical rather than biological in origin, such as spherical bodies resembling pyrite framboids (‘raspberry-shapes’). However these do not appear to be pyrite, as they do not appear to contain much sulphur (pyrite is a form of iron sulphide), leading Barlinget al. to hypothesise that these may also be goethite replacements, this time of minerals formed at an earlier stage in the preservation process. 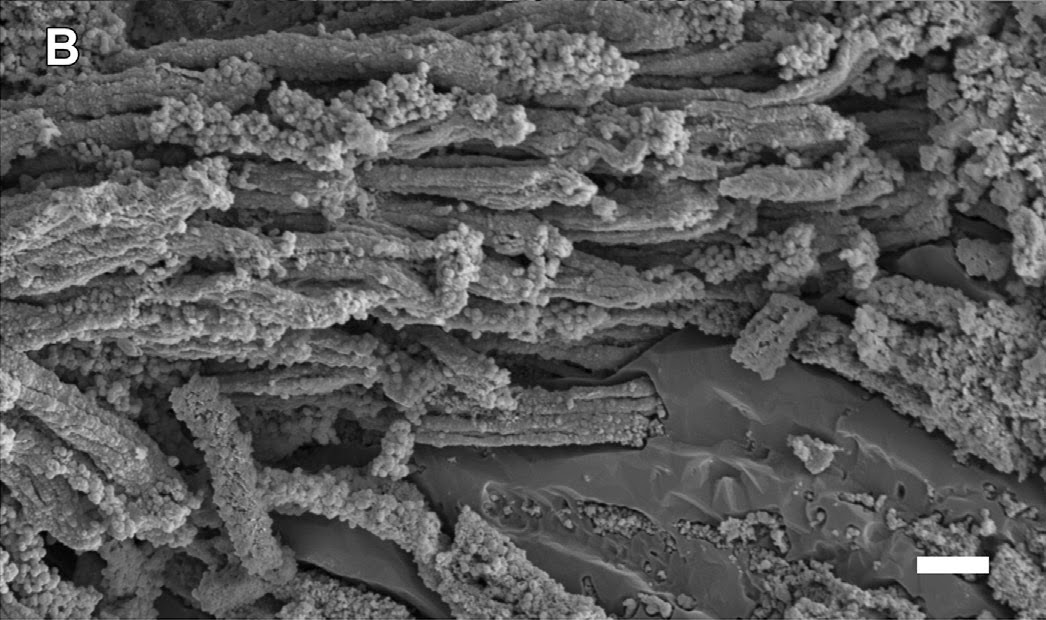 Examination of the Crato Insect fossils under very high magnification electron microscopy suggests that the mineral forming most of the replacement material is a form of iron hydroxide, arranged in small crypto-crystals (expand) about 100 nm in diameter, but arranged into larger spherical or cylindrical clusters up to 20 mm in diameter. These larger clusters superficially resemble Bacterial cells, and have been previously interpreted as a sign of replacement of tissues by Bacteria, which have subsequently auto-mineralized (i.e. mineralized as a consequence of their own biological activity). However the microstructure of these structures is more reminiscent of mineral replacement. 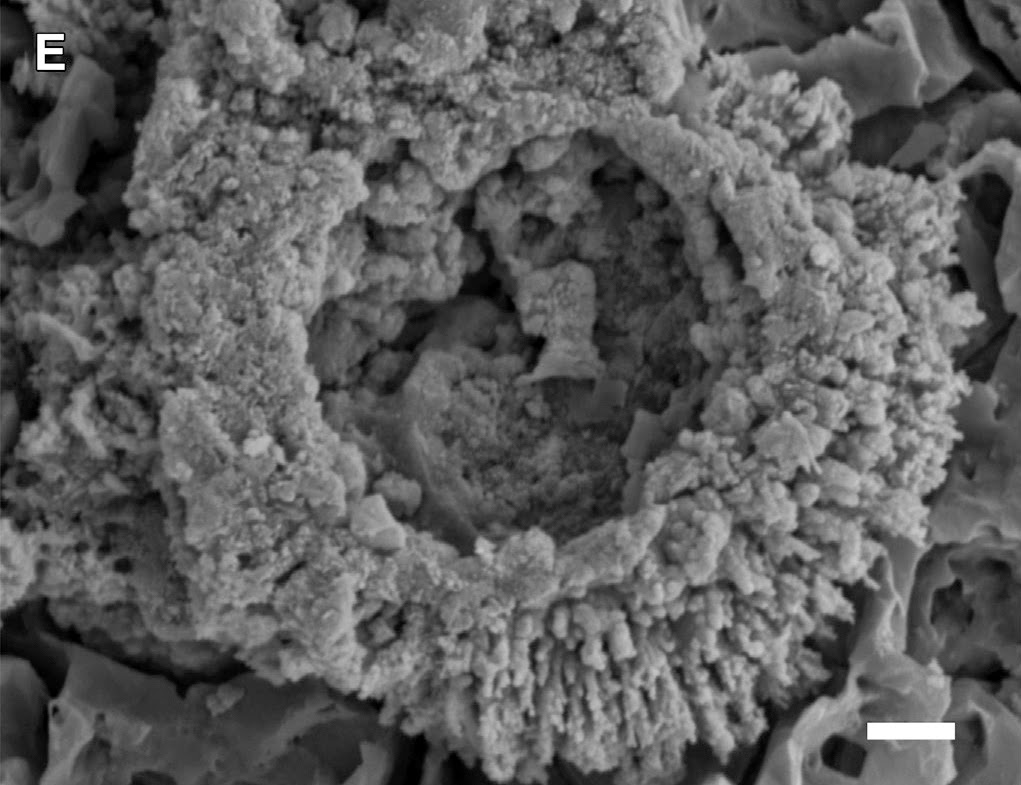 The Crato Insects show a range of chemical phases, and it is not possible to state with absolute confidence what is responsible for the exceptional preservation seen at the site. Similar exceptional preservation is known to occur at other locations where sulphate reducing Bacteria have coated soft tissues under anoxic conditions, then auto-mineralized forming pyrite. However it is not possible to prove that the first phase of replacement in the Crato was pyrite, and nor have any bacterial cells been recovered from the Insects, making it impossible to either prove or disprove this hypothesis. Traces of bacterial mats have been found in the Crato formation – but not at the horizons which have produced Insects. Exceptional preservation of Insects is also known from the Early Cretaceous Jehol Biota of northern China, and in this case is believed to be of geochemical origin. However the Jehol fossils do not preserve the exceptional cuticle preservation seen in the Crato fossils, suggesting that the fossilization process may have been different.

Finally Barling et al. note that while many studies of Crato Insects have been carried out, relatively few have used scanning electron microscopy to study the fine details of the surface of fossils. They note that this is a somewhat destructive process, as it involves coating the samples with conductive material, but recommend that this tool is more widely used when examining these fossils, due to the high quality of results achieved. 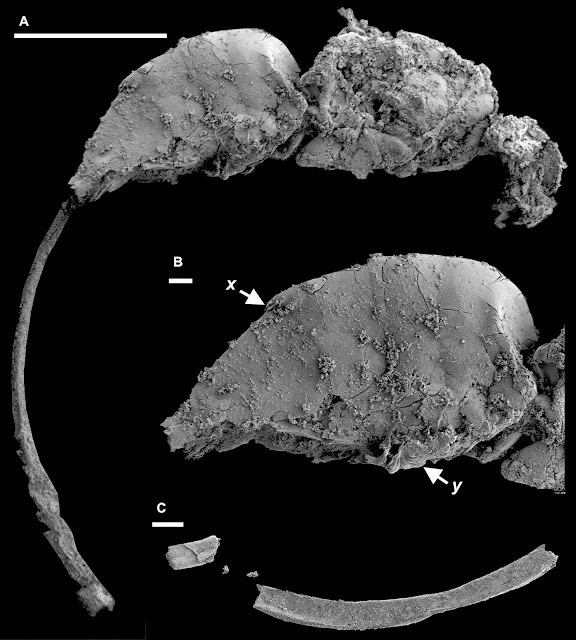 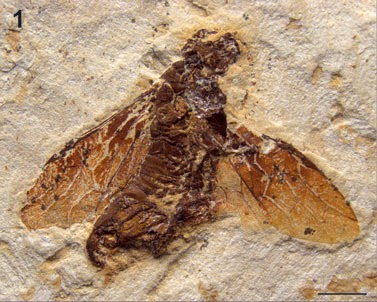