Methane (CH4) is considered to be a serious atmospheric pollutant, both for its role as a greenhouse gas and its immediate effect on the area where it is released, where it can contribute to raised ozone levels at ground level, which is harmful to human health. It is currently calculated that methane is present in the atmosphere at levels 2.5 times as high as in the pre-industrial period, and that the level of atmospheric methane, which rose steadily till the mid 1980s, then slowed and levelled off by the early 2000s, has begun to rise sharply again since 2007. Methane emissions can come from a number of sources, including landfill sites and sewage treatment works, but the majority of the released methane is thought to come from leaks in the natural gas infrastructure (i.e. gas extracted from fossil hydrocarbon sources and intended for use as a domestic or industrial fuel). However the exact contribution of different sources to atmospheric pollution is unclear (and sometimes controversial), and current levels of atmospheric methane are much higher in many areas than predicted to arise from leaks in the gas distribution network.

In a paper published in the Proceedings of the National Academy ofSciences of the United States of America on 23 January 2015, a team of scientists led by KathrynMcKain of the School of Engineering and Applied Sciences and Department ofEarth and Planetary Sciences at Harvard University discuss the results of an experiment in which they monitored methane levels in and around the city of Boston, Massachusetts, for one year (twelve calendar months) in 2012-13, in order to determine levels of the gas in the city, and attempt to determine its origin. 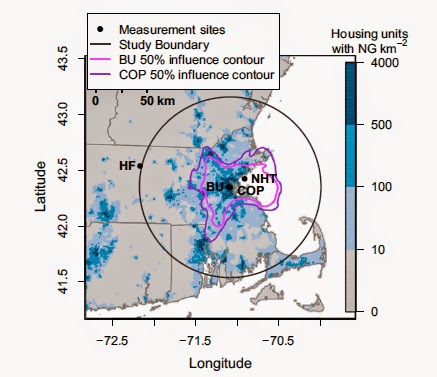 Location of two city [Boston University (BU), 29-m height; CopleySquare (COP), 215-m height] and two peripheral [Harvard Forest (HF);Nahant (NHT)] measurement stations (black points) in Boston, and the surrounding area, overlaid on a map of the number of housing units with NG per square kilometer (14). The 90-km radius circle delineates the ∼18,000km2 land area for which CH4 emissions and the NG loss rate were calculated.The magenta and purple contours enclose 50% of the average footprint(sensitivity area) of the BU and COP afternoon measurements, respectively.The two city sites are difficult to distinguish at this scale because the horizontaldistance between them is ∼2 km. The influence area is ∼80% largerfor COP than BU because the former station is higher. McKain et al. (2015).

In order to determine the origin of the gas, McKain et al. also monitored ethane (C2H6) levels at each site. Ethane forms a significant proportion of supplied natural gas, but is not produced by microbial sources such as wetlands, landfill or sewage farms. Since Boston lacks other potential sources of atmospheric ethane, such as natural geological gas seeps or hydrocarbons refineries, this is taken as a good proxy for gas emitted by the natural gas infrastructure. Based upon this McKain et al. calculate that 98% of atmospheric methane in winter and 67% of atmospheric methane in winter originates from the natural gas infrastructure (a higher percentage in winter would be expected, as humans use less fuel and microbial production is higher).

This suggests that 2.7% of all natural gas supplied to the Boston area during the study period was leaked into the atmosphere. It is currently estimated that 0.7% of all supplied natural gas in the US is lost to the atmosphere, though this figure is not broken down by regions. The State ofMassachusetts produces its own figures, and estimates that 1.1% of supplied natural gas is lost (68% of the study area lies within Massachusetts, while 88% of the supplied gas in the state is consumed within the study area). 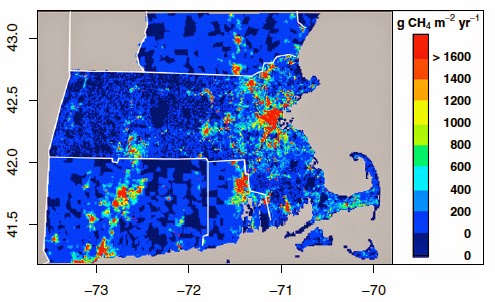 Reconstructed geographical distribution of NG consumption, in unitsof CH4 mass flux, during September 2012 through August 2013 for the fourstates included in the study region. McKain et al. (2015).

McKainet al.’s figures suggest that both the US national figures and the independent figures produced in Massachusetts are severe underestimates. They suggest that this is because these figures are based upon detected leeks from the system (i.e. leeks large enough to be noticed and responded to), and that numerous smaller leeks could go undetected, particularly if occurring in inaccessible places. They also note that leeks on private property are not included in the official figures, but will still contribute to atmospheric pollution. 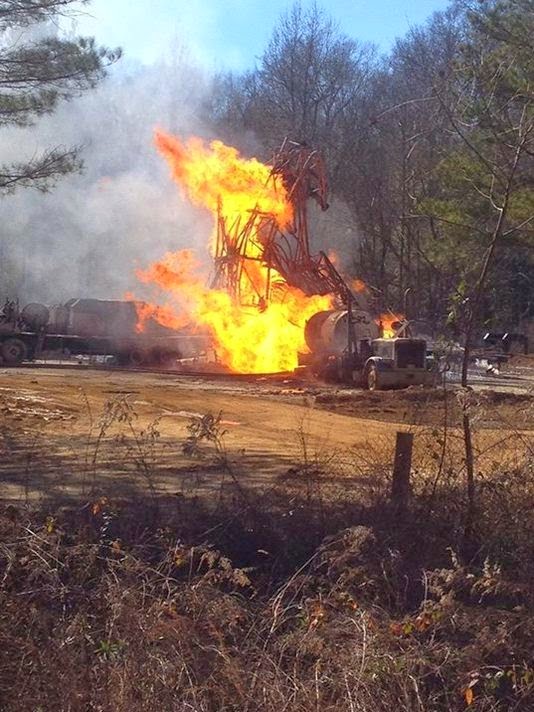 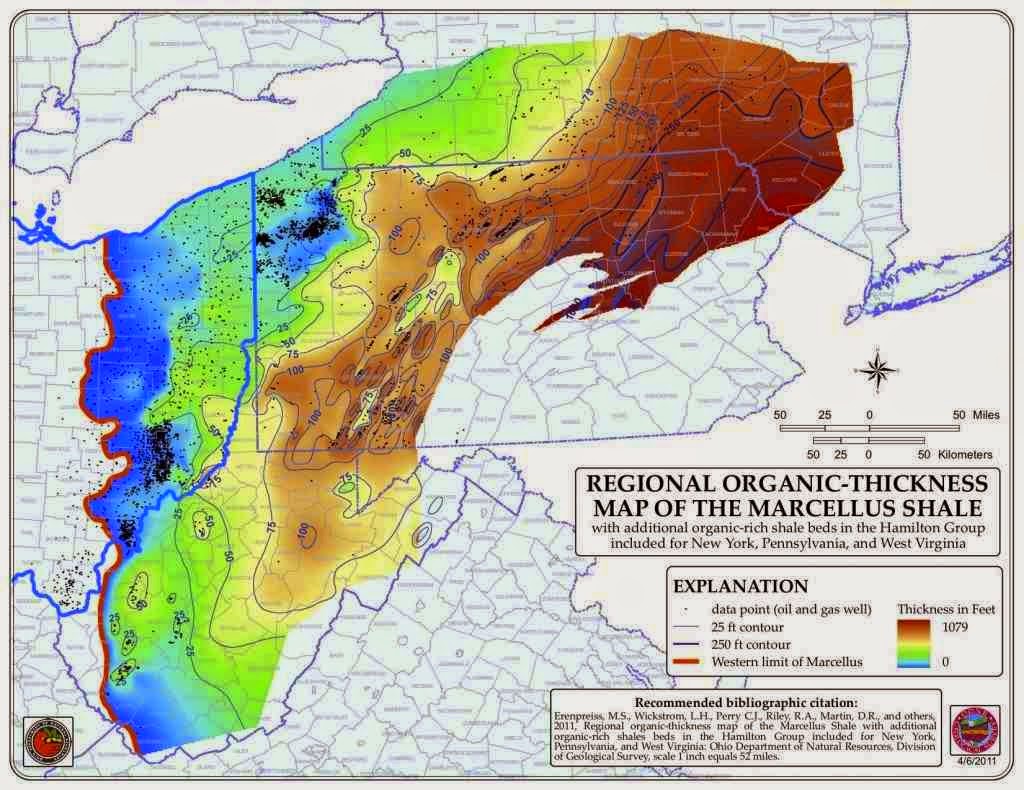 Assessing the risks of cement casing failure at oil and gas wells in Pennsylvania.                 Like other areas of the US, Pennsylvania has seen an increase in oil and gas production in recent years, driven by the expanded targeting of shale gas deposits using hydraulic fracturing (blasting water and chemicals into shale beds at high pressure to break up the shale...
Follow Sciency Thoughts on Facebook.