A fossil Isopod Crustacean from the Early Miocene of the Vienna Basin.

Isopods are one of the most numerous and diverse groups of Crustaceans in modern environments, but while preserved specimens are known from as far back as the Carboniferous, they have a limited presence in the fossil record, largely because their exoskeletons are only very lightly mineralized. They are small, flat, benthic Crustaceans known from marine, freshwater and terrestrial environments, where they are known as Woodlice or Pill Bugs, due to the tendency of many species to roll up into tight balls resembling pills for defencive purposes. Most species are detritivores, though some marine forms are parasitic on Fish.

In a paper published in the journal Palaeontology on 7 May 2013, Matúš Hyžný of the Department of Geology and Paleontology at the Faculty of Natural Sciences at Comenius University, Niel Bruce of the Museum of Tropical Queensland at the Queensland Museum and School of Marine and Tropical Biology at James Cook University and the Department of Zoology at the University of Johannesburg and Ján Schlögl, also of Department of Geology and Paleontology at Comenius University, describe a new species of Isopod Crustacean from the Early Miocene of the Vienna Basin.

The new species is placed in the genus Cirolana, and given the specific name feldmanni, in honour of Rodney Feldmann of Kent State University, an expert on fossil Isopods. Cirolana feldmanni is a 1.3-2.0 mm Cirolanid Isopod (detritivorous or parasitic Isopods ranging from 1 mm to 90 cm in length), described from seven specimens found at Cerová-Lieskové in the Vienna Basin in Slovakia. 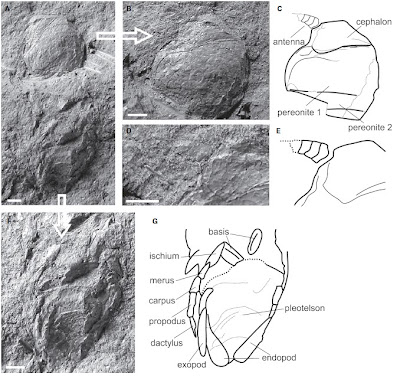 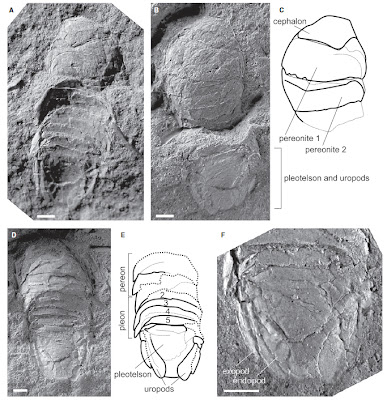 Cirolana feldmanni. (A–B) Near-complete specimen. Anterior exoskeleton part is preserved
as counterpart in (A) and as part in (B), whereas posterior exoskeleton part is preserved vice versa. (C) Interpretive drawing of (B). (D–E) P
repared posterior part with preserved pleotelson and uropods and its interpretive drawing. F, Detail of pleotelson and uropods. Scale
bar represents 1 mm.
Hyžný et al. (2013).